I spent the weekend in a cult frame of mind. Saturday morning, I watched Karyn Kusama’s great new film, The Invitation, and spent much of Sunday afternoon obsessing over the terrific new Hulu series, The Path. Both have, whether their characters admit to it or not, cults at the center of their narratives. But the film and series are about much more than that as they also provide windows into much broader discussions about faith and the variety of ways we believe in and belong to religious communities.

The Invitation takes place at a mysterious dinner party. Eden (Tammy Blanchard) and David (Michiel Huisman), who have been away for two years, suddenly return to Los Angeles and invite their closest friends to a lavish dinner party at their home in the Hollywood Hills. As the film progresses, we learn that one of the guests, Will (Logan Marshall-Green), was once married to Eden. After the tragic death of their young son, the two divorced. Years later, Will still wrestles with grief over that loss, but, upon her return, Eden seems to have put that traumatic experience behind her, which is the main reason she has called her friends together. She and David were part of a group in Mexico, where they experienced spiritual transformation, and now they want to share that gift with their friends.

To say much more about The Invitation would rob the film of much of its power. It sustains an unrelenting tension throughout that explodes into a traumatic ending for the characters and, I would imagine, many viewers. Kusama has taken writers Phil Hay and Matt Manfredi’s single location story and woven one of the most gripping narratives of the year. The film benefits from strong casting, and both rich production design and claustrophobic cinematography intensify the viewing experience.

By contrast, The Path is a much larger narrative, both in length and setting, but equally enthralling. The series follows the Meyerists, a group that feels like a cult, even thought its members consistently refer to themselves as a movement. Based on some of the tenets of their faith and their spiritual practices, it appears to be a mashup of Christian, Buddhist, and New Age thought. The series focuses specifically on married members Eddie (Aaron Paul) and Sara (Michelle Monaghan) and the movement’s de facto leader, Cal Roberts (Hugh Dancy). Eddie has recently returned from a retreat in Peru, where a traumatic experience has left him with doubts about the movement and his place in it. This throws his marriage to Sarah and relationship with their children into disarray. Cal, in the meantime, is taking advantage of the absence of the movement’s founder to both assert his authority and exercise his vision for bringing it further into the mainstream. 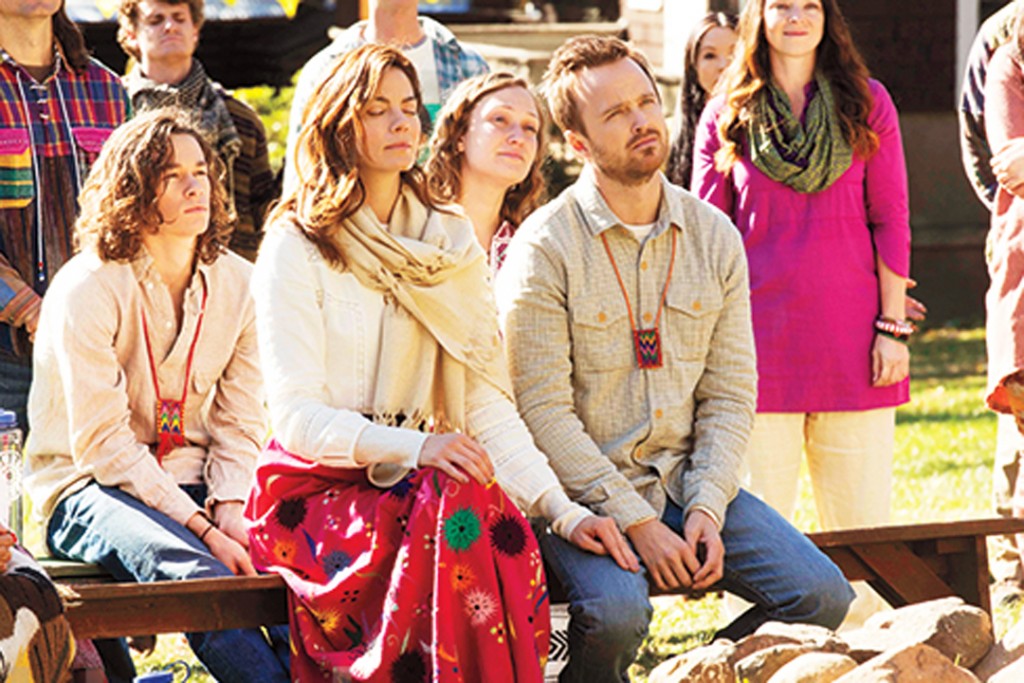 Like The Invitation, The Path nails its casting. It’s great to finally have Aaron Paul back in such a strong series that has loads of potential. Dancy and Monaghan are good too, and the former captures the “is he or isn’t he crazy” brilliance that he put on display in Hannibal. But it’s creator Jessica Goldberg and the team of writers’ clear understanding of and deep thoughtfulness about belief and faith that add such gravity to the series.

One of the common themes between The Invitation and The Path is pain (or trauma) and how we deal with it. The presence of grief in the lead characters’ lives makes The Invitation stand out from other films in the thriller/horror genre, specifically those that feature cults in their narratives. Eden and David don’t join a movement as a power grab. They are grieving individuals in search of healing and wholeness, and when they find it, they want to share it. However, both the film and the series–or at least the cults in them–suggest that pain must be transcended, which feels like another way of saying “bury it.” Pain is an impediment to a fuller, richer life in this world and a roadblock to life beyond it. But this attempt to deny pain or trauma’s hold on us is not only spiritually immature, it might be physically impossible. In her book, Trauma and Grace, Serene Jones consults neuroscientists who talk about the impossibility of physically processing traumatic experiences. Memories of them rattle around in victims’ brains like ping pong balls, forcing them to relive those experiences with the slightest trigger or without any warning at all. Inside Out might work wonders in these communities as it shows how sadness, pain, grief, and emptiness are parts of life that must be integrated into the rest of our experiences. They cannot be paved over on the path to a “better” existence.

Another central theme in both The Invitation and The Path is the question of how we enter into and belong to faith communities–or any community for that matter–and ultimately believe in the truth they espouse. There’s a complexity of belonging in the Meyerist Movement in The Path: some members seem to have been born into it (Sarah), others are wooed into it (Sean), and still others seem to be victims of abduction (the survivors of the hurricane in the opening scene of the first episode). In any event, it is the love and hospitality of the community that keeps most of them there. While there are levels of membership to the movement, progression up those levels isn’t a prerequisite of belonging to the community. But the longer people stay in the movement, and the more love they experience, the more compelled they seem to be to rise in the ranks.

On the other hand, in The Invitation, Eden and David take a radically different approach. Unfortunately, they are of a more violent (psychologically and spiritually) mindset. They expect–almost demand–that their friends see the sense (and the beauty) of what they’ve experienced. They take offense at all questions or suspicions, and so the “logic” and “beauty” of what they’ve experienced is lost on their friends as it comes from a place of frustration rather than love. They miss an integral component of belief–one that was essential to their own “spiritual awakening”–the importance of community. In his new book, On Purpose: How We Create the Meaning of Life, Paul Froese frequently refers to Communities of Truth, which could be denominations, congregations, political parties, etc. He writes, “Communities of Truth build confidence in their beliefs through emotional attachment rather than reasoned debate. For this reason, the power of Truth does not lie in a religion’s doctrine or sacred text but rather in the dedication followers have to each other. Feelings of group love are fused with conceptions of religious Truth.”

This echoes something that Phyllis Tickle discusses in The Great Emergence: How Christianity is Changing and Why, specifically the dichotomy for thinking about how people participate in religious communities. Traditional understandings rely on a model of believe, behave, belong: you believe a particular theology, behave accordingly, and then experience full membership in a community. But Tickle (and Froese) argue that the reverse (belong, behave, believe) is actually a truer assessment of what happens: a community envelops you in love and care, you begin to align your behavior with that of the group, and then you fully believe in the foundational truths of the community.

If we consider this dichotomy when viewing The Path, we see further complexities at work. Like Eden and David’s approach to their friends, there’s a violent streak in the Meyerist Movement as well, one that’s more characteristic of the believe/behave/belong model than its alternative. A defector from the movement has some damning accusations against her former community. At the same time, the movement’s means of dealing with transgression (or regression) is also violent: doing “fourteen days in-house,” isn’t the staycation it might sound like. But, in the end, it might be these tensions–this realization that religious movements and communities aren’t all light or all darkness–that set these narratives apart from so many others.

While The Invitation reaches an unsettling conclusion, it remains to be seen, of course, where The Path is taking us. However, it’s first three episodes are strong enough to demand more attention and devotion. As it stands, both The Invitation and The Path are two of the more thoughtful entries in the cult sub-genre since Martha Marcy May Marlene.

The Invitation (100 mins.) is rated R for violence and language and is in limited theatrical release and available on iTunes, Amazon, Google Play, Vimeo, and Vudu.

The first three episodes of The Path (60 mins.) are streaming on Hulu. New episodes release on Wednesdays.