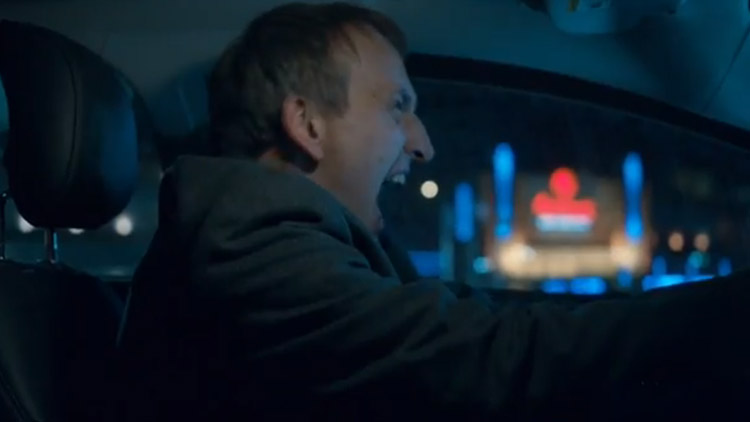 I “bought in” on The Leftovers even before the first episode aired. The pilot met all my expectations while the second episode left me feeling a bit disappointed. However, last night’s episode, “Two Boats and a Helicopter,” set a benchmark for the young series, taking it in a different narrative direction (focusing on only one character) that I hope subsequent episodes will follow.

Last night’s episode of The Leftovers felt like a puzzling morality play set against an amoral backdrop, which made it absolutely fascinating. The episode begins with Matt Jamison (Christopher Eccleston), an Episcopal priest, giving a homily to a congregation barely reaching double digits. In it, he tells a story about a little boy that could very well be an example from Leslie Weatherhead‘s famous book, The Will of God. To conclude his homily, he asks the congregation to pray for a young girl lying in a coma. As he finishes his prayer, a burly man bursts into the sanctuary, approaches Matt at the altar, beats him soundly, and stuffs a flier in his mouth.

We soon realize that Matt is more than just a priest, he’s also something of a post-Departure agitator. In an effort to better understand the event that claimed 2% of the world’s population, and to make clear that it’s not part of any Divine plan traditionally promoted by the church, he publicizes secrets about the sinful Departed, posting them on fliers around town. He calls out people who were addicted to porn, gambled away their children’s college tuition, or repeatedly drove while under the influence. Such brash truth-telling has landed him in the emergency room on more than one occasion as surviving family members or loved ones avenge their dearly Departed.

Matt is also in financial trouble as the church that his parents “left” him and his sister is in foreclosure. Unless he can come up with $135,001 in cash, a buyer will take control of the property. Matt puts various “signs” together as a message from God and goes on a seemingly divinely-ordained gambling spree, parlaying $20,000 into $160,000. On the way to the bank from the casino, he stops to help a member of the Guilty Remnant, who has been attacked by passersby. In the process, Matt is also stoned by the same attackers. When he wakes up in the hospital, he rushes to the bank to buy back the church, only to learn that he has been in a coma for three days and missed the deadline to buy back the property. To make matters worse, he soon learns that the Guilty Remnant purchased the property and are in the process of boarding up the stained glass and stripping it of all religious items.

It’s difficult to determine where to begin a theological/spiritual analysis of this episode, teeming with life as it does. Matt himself is a Job-like character, suffering tragedy after tragedy: his parents died in a house fire, he almost died as a child, his wife lies in a coma after a Departure-related car accident, and the list grows. Both Matt’s experiences and the homily he delivers at the beginning of the episode raise questions about the “Will of God,” whether or not we can know it, participate in it, or confuse it with our own. He and his message are clarion calls to be careful what you wish (pray) for.

Matt’s ministerial life once again reveals that no good deed goes unpunished, but he soldiers on. He seems to be a devoted and caring priest, at least before the Departure. In one particularly beautiful scene, he baptizes an infant at the request of its father, whose wife no longer attends church. So far in the series, Matt treats the Guilty Remnant with more respect and compassion than anyone else in town, giving the “Watchers” blankets when they stand out in the cold and, again, helping the victim of a drive-by stoning, which also lands him in the hospital. On the other hand, he is on a vendetta that embarrasses and scandalizes families and survivors in an attempt to personally make sense of an event that has defied all of his expectations about the way in which the world will work, even as it is also emerges, implicitly, from his conviction that God might yet work in those traditional ways.

Matt might also be a mirror image of many real world believers, whose convictions about what God tells them to do say more about them than the Divinity to which they listen. Officer Garvey’s father leaves Matt the $20,000 that he turns into $160,000 (a donation that demands further explanation later in the season). Regardless, Matt sees no problem with God “telling” him to go to the roulette table and bet it all on red, a message that would sound more convincing if it was something that “the devil told him to do.” Matt could simply let his church go, be a better caregiver to his wife, and use the money to pay the sitter that also helps care for her. Instead, he risks it all to buy back a building–an institution–that might no longer have a place in a post-Departed world.

The Leftovers airs on HBO on Sunday nights at 10.