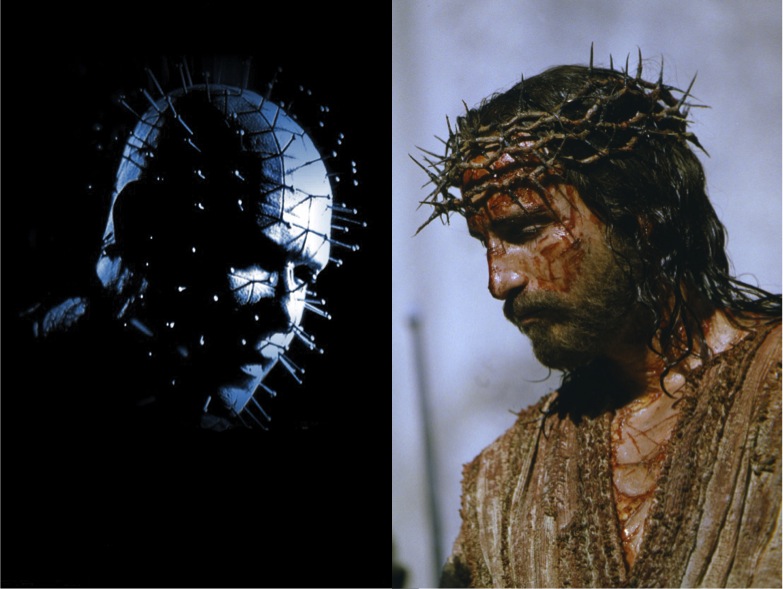 The following is an excerpt from my upcoming dissertation on the uses of gay camp in biblical films. This section discusses horror movie conventions used in The Passion of the Christ. It is my contention that Mel Gibson’s use of these strange and even humorous tropes in what is otherwise a horrific and torturous account of the last hours of Christ opens The Passion to a broader reading—even a “camp” or “queer” reading. The illustrations are presented as visual evidence of this thesis.  – Richard Lindsay

By the end of the flogging scene in Mel Gibson’s The Passion of the Christ, Jesus is a bloody pulp, and with the crown of thorns, he resembles the character Pinhead in Clive Barker’s Hellraiser series. However, there turns out to be some unintended Biblical theology behind turning Jesus into a monstrous figure. As Galatians 3:13 puts it, “Christ redeemed us from the curse of the law by becoming a curse for us—for it is written, Cursed is everyone who hangs on a tree“(NRSV). Although an incarnational, liberating theology seems farthest from the mind of Mel Gibson, we could see The Passion as Christ becoming a monster in solidarity with all others who are treated as monstrous in the world—the disabled, the sick and dying, the unfairly imprisoned and inhumanely tortured, the poor, and people of sexual or gender difference. In this way, the monstrousness of this horror story, intended to portray the kerygma of the cosmic battle of Good versus Evil, unintentionally becomes queer. What The Passion suggests through its camp kerygma, is what Paul suggests in Galatians: that Jesus was ‘queered’ on the cross.

This would not be too much of a stretch for queer writers, many of whom have described the relationship between monstrosity, queerness, and horror. In his book on monstrosity and homosexuality in film, Michael William Saunders notices what other writers like Stephen Moore have noticed about the dual nature of queerness as it applies to monstrosity:

The idea of the monster derives from two fundamental etymological myths: that monsters are anomalous creatures that serve as signs indicating the consequences of the natural order (Look what happens when you do bad things!); and that monsters are marvelous, monumental manifestations of the power of God (Look what God can do!). The monster is, by its very nature, most fundamentally an image whose purpose is to reveal the power, and more importantly, the terror, of divinity.[1]

Once again, we see the ability of queerness to simultaneously define in opposition and undermine in perversity. Jesus’ monstrosity in The Passion is both a warning (a remonstration) of the power of evil, and a sign (a monstrance) of God’s terrible power. Saunders goes on to explain the spiritual value of voyeurism as we the audience gaze on this horrible monster that Christ has become:

[The monster] is meant to be seen, but its nature as image is to discourage us, either through fear or through awe, from looking too long where we ought not to look. …If we look at such an image too long or too often, we commit a sacrilege or we endanger ourselves by presuming to look casually at what we are not meant to be able to bear. As an image, a monster functions to give power to an elect—the hierophants who are allowed to wield the image because they have proven their immunity against it….”[2]

This echoes the reactions of professors Russell Hittinger and Elizabeth Lev to Gibson’s film. They write, “We, too, have been witnessing these events, and that it is now we who are called to bear witness to what we have seen.”[3] Their call to witness initiates us into that hierophany of privileged viewers who have experienced the brutal torture of Jesus Christ, and we are called to speak about it to the world.

Taking one more queer twist, however, beyond the voyeuristic salvation offered in The Passion, is the possibility of identifying with Christ as a queer body. In his essay “Growing Up Horror,” gay writer D. Travers Scott writes about his childhood obsession with horror movies and makeup and how this became an overt expression for more covert sexual desires. As a preteen, he decorated his room with horror movie posters, rubber body parts, and wig stands decorated to look like they had deteriorating flesh and rotting eyeballs. Scott places this fascination beyond identification with outsiders, what he calls “Freddy Kruger-as-Genet.”[4]He explains that horror helped him take real pleasure in his “body’s rebellious nature.” He adds, “At a time when my body was under multiple systems of oppression—too young, too queer, too prone to disease—stories of rebellious bodies…filled me with glee.”[5]

At the same time, this body-ness serves an important function when placing Gibson’s Jesus film in the broader context of the Jesus film genre. The destruction of Jesus’ body in The Passion is perhaps more evidence of Christ having a body than any previous Jesus film had dared to portray. This is the polar opposite of Jeffrey Hunter’s pretty, barely-bruised Jesus with shaved underarms in Nicholas Ray’s King of Kings (1961), a role that earned the ire of cynical critics, who called it “I Was a Teenage Jesus.” The graphic production of The Passion creates a Christ body that is gruesome and carnal, like the “horror” bodies beloved by Scott, the young burgeoning queer. These bodies are, “Adamantly irrational. They populate a world in which common sense no longer reigns supreme, but lust, passion, frenzy, and desire erupt in swollen uprisings.”[6] Scott further describes these horror bodies as subaltern: ‘The members of these rebellions are not a downtrodden underclass but downtrodden values: passion, love, emotion, and feeling, all demanding their say, their place at the table of consciousness and reality, their recognition in the tyranny of an ascetic Puritan, rational, reproductive, sterile, and all-too-safe- world. And how queer is that?”[7]

Taking Scott’s reflections a theological step further, could we dare ask: In the same way, a flayed savior who really bleeds, really suffers, and really dies an agonizing death…how queer is that?! Of course, if you don’t think that The Passion of the Christ belongs squarely in the horror film genre, consider the brief photographic argument here:

Note: Recall the shot of the elderly man with his eyes gouged out in Alfred Hitchcock’s The Birds (1963).