The foundational event in Han Kang’s thrilling novel, The Vegetarian, doesn’t sound like the grounds from which a great book would emerge. Yet Kang’s brilliance as a writer lies in her ability to weave a gripping, horrific narrative from the most innocuous of choices. 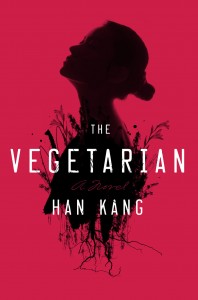 In The Vegetarian, central character Yeong-hye has a recurring, brutal nightmare that causes her to renounce eating meat. When she announces this to her already distant husband, he grows colder. When he brings her family in to address the situation, things get much, much worse. Kang tells Yeong-hye’s story in three distinct sections, the first from her husband’s point of view, the second from her brother-in-law’s (an artist named J) point of view, and the third from her sister’s (In-hye) point of view. As these three family members attempt to control Yeong-hye, she sacrifices her body and mind to remain true to her decision. That Yeong-hye never speaks for herself in the novel is a central point in Kang’s work.

The Vegetarian has much to  say about women’s bodies, their autonomy over them, and how society (men in particular) reacts to this autonomy. Though Yeong-hye’s decision and transformation is mesmerizing, her family’s responses to it are far more disturbing and say far more about who we are through our inability to integrate the unknowable into our lives.

Kang also has rich spiritual aspirations. Reflecting on her novel, she asks, “What are humans? Humans are creatures who sacrifice their lives without a moment’s hesitation to save a child who has fallen onto the subway tracks; they are also the creatures who did such things at Auschwitz. The Vegetarian was sparked by my uncertainty about the spectrum of humanity–a spectrum that stretches from holiness to horror.” She’s also working in the theme of sacrifice and asking big questions about it. From a theological perspective, I’ve often wondered if an early death is the only, inevitable result of living a truly Christ-like life. Kang adds, “Is it really possible for humans to live lives of innocence in this world? What would happen if someone dreamed of being completely innocent and tried to achieve that in their own life–if they destroyed themselves to avoid hurting anything else and paradoxically destroyed other people in the process?”

The Vegetarian is a haunting experience that, as many critics have pointed out, recalls the works of Kafka. But it also put me in mind of the films of David Lynch, Brian de Palma, and Jonathan Glazer (Under the Skin). The Vegetarian is definitely one of the early must-reads of 2016 and one that will leave a lasting impression.