Critics and moviegoers at this year’s L.A. Film Festival are praising the diverse lineup. Three-quarters of the festival’s world premiers are directed by women or people of color. Eighty percent of the entries are from first-time filmmakers. These are welcome statistics indeed. Two of these films, though set in drastically different locations, use scandalous relationships to explore highly contested spaces, female and gay sexuality and agency. The View from Tall and Play the Devil are sometimes technically uneven, but they are consistently thought-provoking. 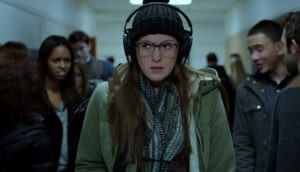 In Erica Weiss and Caitlin Parrish’s The View from Tall, a scandalous series of interactions hang like a spectre over high school senior Justine’s (Amanda Drinkall) last year in school. She’s been having sex with one of her teachers. He’s moved away, leaving her to deal with the fallout, which includes forced meetings with a therapist. Her parents are horrified, and her sister and other classmates bully and humiliate her on a daily basis. Justine’s just trying to survive until graduation, when she, too, can escape. Her therapist, Douglas (Michael Patrick Thornton), sympathizes with her, consistently framing her as a victim, even though she repeatedly stresses her responsibility in the affair. As the film progresses, Douglas and Justine form a friendship, which soon threatens to look a whole lot like Justine’s relationship with her teacher.

This is potentially offensive subject matter that will make some viewers uncomfortable, even though the casting choices make this the oldest looking high school I’ve ever seen. Of course, that discomfort with the material begs serious questions. Why can we laugh at sexually precocious high school boys (Stiffler’s mom, anyone?), but are repelled by Justine’s actions? Justine exists on that weird 17-years-old/18-years-old boundary, where, with the tick of a clock, sexuality goes from illegal to legal, and that complicates the narrative.

To get all bent out of shape over the events in The View from Tall is to both miss Weiss and Parrish’s point and to embody it. Sure, Justine is a victim of “sexual abuse,” in the sense that no high school teacher should ever cross that boundary. But it seems that Weiss and Parrish are using a hyperbolic relationship to show an even more severe victimization–female sexuality in a straight male-dominated society, which is succinctly embodied in her father’s reaction to the events: “He raped you, or I raised a whore.” 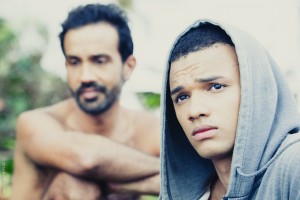 Play the Devil is set in the comparatively cinematically fresh Trinidad and Tobago. Directed by Maria Govan, it focuses on Gregory (Petrice Jones), a bright high school student with an equally bright future. Everyone expects him to win a scholarship to study medicine abroad, even though he wants to be a photojournalist. His life is thrown into conflict when James (Gareth Jenkins), a wealthy local businessman, takes an interest in him. James encourages Gregory to pursue his dreams and even gives him a digital camera to practice. We quickly see that James’ interest in Gregory is far from altruistic and that he’s physically attracted to him as well.

Like The View from Tall, Play the Devil has a problematic relationship at its center, but it also forces us to ask questions about sex(uality) and agency, here complicated by the tension between homosexuality and religion. Gregory appears to be part of an evangelical Christian community, and when he goes away with James for the weekend, the guilt almost destroys him. As a result, the film then asks us to consider what we will be driven to do when we aren’t allowed to be and express who we truly are.

Play the Devil builds to a shocking conclusion set in the beautifully haunting carnival celebration of Jab (or devil). Govan’s staging of this event is marvelous and allows Gregory to vent his anger, frustration, and passion. As Gregory and his best friend walk away from that all-night event, the film concludes with as beautiful and memorable scene as I’ve seen in quite some time.