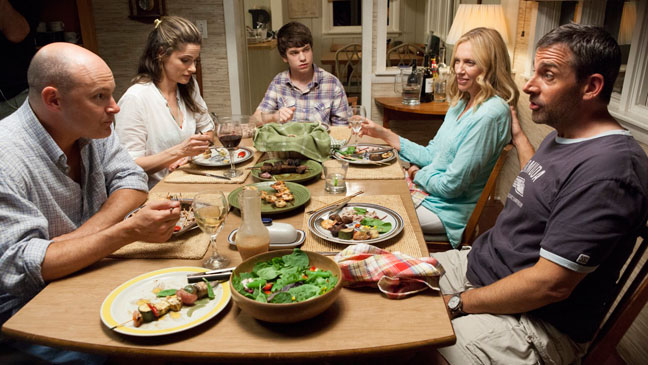 It’s unfortunate that one of this year’s best films won’t get the wide theatrical release it deserves. So, for those of you not lucky enough to see the indie sensation The Way Way Back in theaters, then start counting down the days until its subsequent home video release.

The Way Way Back tells the story of boyfriend/girlfriend duo Pam (Toni Collette) and Trent (Steve Carell), who take a trip to Trent’s beach house with her son Duncan (Liam James) and his daughter Steph (Zoe Levin) in tow. Trent repeatedly talks about the communal effort required to make this new “family” work, but his own efforts are misguided at best and toxic at worst. Duncan can’t stand him and starts to suspect that Trent may be more than friendly with long-time pal Joan (Amanda Peet). To escape the annoying adults around him, Duncan frequents the local water park, Water Wizz, where he befriends manager Owen (Sam Rockwell). Owen becomes something of a surrogate father for Duncan and gives him not only emotional support but a job in which he flourishes. But when things come to a head between Pam and Trent, events threaten to shatter the safe space that Duncan has created for himself with his new-found friends.

So many things work to perfection in The Way, Way Back and they all seem to be constructed around a network of dualities. Briefly outlining these will also shed some light on the central themes that the film addresses.

The Way, Way Back takes viewers on the best of emotional rides that never feels overly manipulative thanks in large part to the understated writing by Faxon and Rash and the brilliant acting by everyone involved. It’s easily one of the best films of the year (along with Mud and The Act of Killing).

The Way, Way Back (103 mins.) is currently in theaters and is rated PG-13 for thematic elements, language, some sexual content and brief drug material.