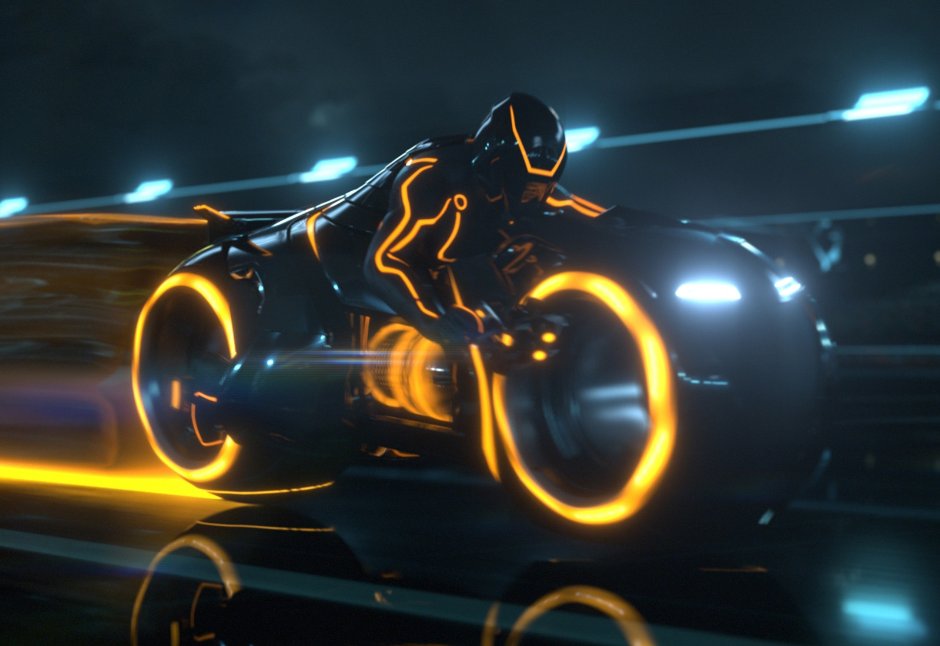 TRON: Legacy is one of the best trips you’ll ever take without drugs. Jeff Bridges is here as his post- and pre-Dude self (The Dude abides indeed on two different axes of the space-time continuum—trippy), and Michael Sheen does a magnificent turn reminiscent of Malcolm MacDowell‘s Alex from A Clockwork Orange (1971), but the best casting in this film was the music of Daft Punk. The music positions the film as what it is: a techno-rave and special effects extravaganza. As you watch this imaginary world swoon and shatter in 3D, homages to all film spectaculars, from Metropolis, The Wizard of Oz, Ben Hur, 2001: A Space Odyssey, Star Wars, and Blade Runner, and, if I’m not mistaken, several Lady Gaga videos spool off through the cyber universe at the speed of light. People who complain about such trifles as “story” and “character” are missing the point. That’s not what this film is about (nor was the original for that matter).

But something about the original TRON (1982) and the sequel on cyber-steroids, keeps making my theo-sense tingle. There’s a lot here about incarnation—creators entering “the Grid” they’ve developed, and trying to fix bugs in the system. In the original, the liberation theology was evident, as the programmer Kevin Flynn (Jeff Daniels) entered the universe he’d created and sacrificed himself for it—only to be “resurrected” back into the real world.

In TRON: Legacy, there’s a lot of juicy possibilities in the son of the programmer, Sam Flynn (Garrett Hedlund), entering the world created by his father. The father Flynn has made a creature, a program named Clu (also Bridges, but computer morphed into his younger self). As Flynn himself says, Clu was “made in my own image,” but the creature’s gone bad in his self-aggrandizing pursuit of perfection…all very orthodox from a Christian perspective. There’s even a wonderful “Son of Man” moment, where the son sees the younger program of his father, but then realizes it’s Clu, not his dad. Thus, Sam becomes both “user” and “program,” both divine and human.

But that’s where the orthodoxy ends. The movie plot tells us Flynn the elder has been “captured” in this world. When we find him, he has withdrawn to a cave on the outskirts of the “city,” meditating. Unlike Clu, he’s stopped trying to perfect things and has begun to take a Zen-like approach to his existence in the cyber-verse. Sam soon takes it upon himself to save his father’s ass, and if you’re into process theology, this will not come as a shocking turn. There’s some implication, even biblically, that the Christ event could be seen as a correction of an error in God’s creation, or as Jack Miles put it, A Crisis in the Life of God.

I kept hoping for a truly “Christian” conclusion to this film—that the son would actually die to set things right in the cyber-world. The letdown the audience would feel at such an unfair conclusion would demonstrate the problem with orthodox Christianity. It doesn’t happen this way in the movie; in the world of moral actions as we know it, it’s the parents who sacrifice everything for their children. What Hollywood understands that orthodox Christianity does not, is that this is truly the only moral choice. It is not moral for a sovereign creator to ask an innocent, a human, even a God-human who is his son, to be sacrificed to atone for his own sense of moral outrage—or even to meet the demands of some abstract idea of justice. It is the world that requires the sacrifice of innocents, not God. The only possible way to read a sacrifice for the sake of the world as being moral is if God sacrifices God’s self as an act of solidarity with human suffering, perhaps even as an act of self-atonement. The only question is how did the master programmer end up creating a world where sacrifice of innocents is possible and common? Maybe, like Kevin Flynn, the creator of “the Grid” in Tron, God was a young deity when God created the world and didn’t understand the limits of trying to create a universe in God’s own image. Maybe God’s grown up a little bit since then.

TRON: Legacy also has a heavy dose of apocalyptic themes alongside its atonement issues as well. The “apocalyptic” in this film is the characteristic sci-fi calculation of a world thrown out of whack, with “heaven” being a restoration of the world to “normal.” The world is heaven if you just realize it, and perfection can be found in a child’s eyes. This is pure Hollywood tripe. Hollywood never seems to be able to come up with an apocalyptic fantasy beyond this formula where the whole world is destroyed so some white people can see anew the value of their heterosexual nuclear family. In Hollywood, it has also become standard (as happens for Sam Flynn) that heaven actually exists somewhere on the outskirts of Vancouver. Such beautiful scenery! It’s familiar yet strange! And the currency exchange rate’s so much better, eh?!

From a fanboy P.O.V., sitting in the theater, I realized I had not been surrounded by so many dorky straight guys since I lived on the honors floor during my freshman year of college. I don’t know what these geeks, who seemed to be in their twenties, got out of it, but for me, the smattering of Journey and the Eurythmics as Sam enters Flynn’s Arcade from the original movie helped capture the wonder of the early 80’s, when the possibilities of what personal computers could do—both for good and for ill—was still largely imaginary. It’s sad that the Giant Imperious Mouse named Disney has seen fit to crush all extant DVD’s of the original. (You can’t even get it on Netflix!) Compared with what the company’s “imagineers” have unleashed in the sequel, the original’s animation is rudimentary at best—often blocky and mechanical. However, the significance of the original’s visual effects was the world it predicted, not the visual quality of it. Watching the original TRON in today’s context, we see the film’s prophetic fulfillment, both as the harbinger of the CGI era, and its prediction that there might someday be avatars of ourselves living in a cyber-universe.

But enough about atonement, apocalypse, and prophecy. This film works best as an extended music video and drug-free hallucination. Don’t worry that the plot is clunky, unintelligible, and has holes like Swiss cheese. Don’t worry that besides Jeff Bridges and Michel Sheen, the actors are as interchangeable as action figures. Try not to think about whether or not you’re being goosed for a sequel that, like the Matrix series, will only water down what was remarkable the first time with each passing film. Put on your 3D shades, plug into the ripping soundtrack, and take a wild ride. Or as Pauline Kael wrote about 2001: “Just follow the slab. Drop up.”

TRON: Legacy (127 mins.) is rated PG for sequences of sci-fi action violence and brief mild language and is in theaters everywhere.