Pop Theology contributor Benjamin Drew Griffin has had some time to swim in Radiohead’s new album, A Moon Shaped Pool. His thoughts after the jump.

A Moon Shaped Pool will either be remembered as Radiohead’s ‘break up’ record or Jonny Greenwood’s magnum opus–or maybe just the time Jonny soundtracked his bandmate Thom Yorke’s heartbreak. For those looking for the twitchy electronic freak outs that have made Radiohead the band of the 21st century, know that you will be disappointed. If you’ve been paying attention to their trajectory over the last few records, however, I think you will find that they have accomplished something else quite remarkable. For a band that has been known to – and subsequently expected to – change the musical landscape it’s quite refreshing to simply hear them sound more confidently, if simply, themselves than they ever have. This is, of course, not to say that there isn’t innovation. Whereas the Radiohead we’ve come to expect fall somewhere on the spectrum of blistering guitars and scattered beats, this iteration is thoughtfully orchestrated, symphonically and intensely ornate. The innovation is less on the surface (if it ever has been with them) and more deeply embedded, begging not only for multiple listens but for the absolute intimacy of headphones. 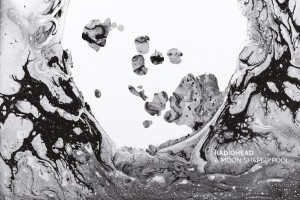 Arguably, Radiohead has already made one contemplatively headphone-bound masterpiece with In Rainbows. Although that record began with their signature glitch-rock, it quickly settled into a serene subtlety of muted love songs and existential ramblings. Taking their now customary 4 year break, they appeared again with literally the exact opposite energy, releasing a fierce and fleeting beast of a record with King of Limbs. But, by all accounts, something was a bit off with KoL. Although there are some undeniable gems, KoL was bound to its unique recording approach with the band members separately offering various loops and licks, piecing and remixing their disparate thoughts together as they went along. Recorded amidst each member’s further exploration of solo projects – in Jonny’s case, movie soundtracks – KoL plays like a band whose thoughts are jaggedly jutting out every which away, only sometimes in the same directions, coming together in a frantic fury of creativity only to burn away nearly as quickly. A Moon Shaped Pool is literally the exact opposite.

There is a serene softness to every song here, buoyed not simply by the strings nor defined by the acoustic melodies, but rather held gently together by sheer vulnerability. Whereas Radiohead became truly famous for building up an elaborate façade of robotic ruminations and alienating paranoia, this is perhaps the most human we’ve heard them since The Bends. Sure, In Rainbows was a fairly intimate record but even then Thom Yorke still found a way to infuse it deeply with a sense of foreboding fear. Here, however, Yorke isn’t contemplating the tender, fleeting nature of life – he’s broken by it. Once the proud protestors of political power, all anger and aggression towards the Orwellian overlords and their technological tyranny, Radiohead here find themselves exceedingly exhausted by it all. On the record’s most ‘upbeat’ track – the delightful opener “Burn the Witch” – we find Yorke treading familiar ground as he warns against our modern day xenophobic/misguidedly moralistic witch hunts. But rather than leaving the listener fearful to think of a “what if?,” the song plays more like a “what the fuck?” with each subsequent track proceeding to carry on this “really, people?” sentiment. I think we might have broken Thom Yorke.

But this isn’t really a political record. Sure, the theme does continue to pop up as Yorke sounds more and more deflated in the face of it all but the real meat here is when you place it in context of his personal life and the dissolution of a 23 year relationship. From the desperate attempts to convince himself that “there are different types of love” to the watery morose “Glass Eyes” that finds him aimlessly wandering into the conclusion that he can “feel this love turn cold,” it is not simply the world that is breaking Yorke’s heart this time around so much as he’s finding himself heart-broken amidst a broken world. Abstruse as ever, his lyrics don’t paint a plain narrative so much as embody the way in which every thought can become darkened at the edges, movement slowing to a pathetic crawl, and hope becoming a joke of a memory in the dull light of night. Really, this is the only way Radiohead could do a break up record: by wrapping the listener in the aesthetic of heartbreak itself.

And it’s the aesthetic here that is the real victory. Kid A had its electronic post-rock, Amnesiac its post-modern jazz, but there is a level of deliberation here that I’m not sure we’ve heard since Hail to the Thief. While Yorke’s headspace might have brought down their tempo, Jonny has stepped up to make sure every possible gap is made up for. Filled to the brim with complex orchestral arrangements, pushing tunes that would be sparse in another band’s hands to become blossoming triumphs, this record is a sonically delicious ride. Like I said, this isn’t quite the band we’ve come to expect. Sure, there are some wonderful true to form tracks such as the dizzying, claustrophobic psychedelia of “Ful Stop” or the tried and true political paranoia of “Tinker Tailor Soldier Sailor Rich Man Poor Man Beggar Man Thief” (I wonder why some people think them a bit pretentious…) but the departures are just as engrossingly fascinating – particularly in the Nick Drake-ish rustic strum of “Desert Island Disc” or the rousing choir hook of “Identikit.” But, as I mentioned before and cannot stress enough, these arrangements truly come to life with the headphones in and the distractions set aside.

Letting the music wash fully over you, you will begin to hear the incredibly subtle touches the band has provided here from the string section’s haunting echoes of reversed lyrics on “Daydreaming” to the choral heights on “Decks Dark.” Of course, this is not simply the Thom and Jonny show, with Colin Greenwood’s mastery of well-placed bass hooks and Phil Selway’s drumming as dynamically stunning as ever, they have once again proven themselves as a band in utter control of their sound no matter how unique this record is in their overall catalogue. Honestly, I couldn’t imagine Radiohead ever stumbling about a new direction, partially because they’re just so damn talented but mostly because they work so hard at it. As with many of their records, several of these tracks have existed in one form or another for years and, after years of playing around with them, they’ve finally settled on a perfect presentation.

One such song is how I’d like to end this review and, if you listen to anything off the record, let it be this. Appearing first in 1995, recorded live in 2001, and sporadically appearing throughout their career, album closer “True Love Waits” is a song that many Radiohead fans are already intimately familiar with – but there has never been an iteration as intimate as this. Most structurally similar to the hauntingly lovely In Rainbows closer “Videotape,” this version translates the once acoustic number into a lilting piano ballad that slowly becomes consumed by layer upon layer of ambient noise. Whereas “Videotape” becomes warped in a dissonant and claustrophobic loop, “True Love Waits” is built up with cacophonous harmony verse by verse as the main melody meanders onward. I honestly do not know how to describe the experience of this song but I cannot stress this enough: find a quite space, put your headphones in and allow yourself to bathe in this record. The moon is all the light you’ll need.