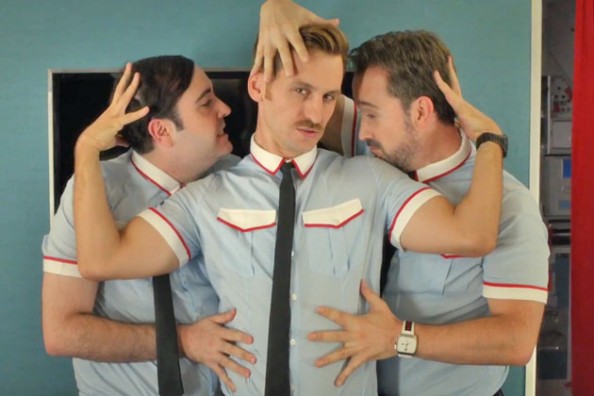 One of my least favorite ways to address popular culture and religion is to use films or television as a form of virtue training.

This is pretty much the approach of evangelical writer Connie Neal’s Gospel According to Harry Potter, which tries to help conservative Christians get around all that icky fantasy witchcraft stuff they’re uncomfortable with to see that “the lessons in Harry Potter not only echo many of the stories in the Bible but reinforce the central messages of Christianity.”

As usual, the assumption here is that Christianity contains all truth and that popular culture can at best reflect back that truth, but can offer no valid critique of or new insight into accepted Christian thinking.

One example of virtue training I would love to see a religious publisher market a book about is the warped wisdom of Pedro Almodóvar’s most recent film, I’m So Excited. The original title is Los Amantes Pasajeros, which is a double entendre that could mean “the passenger-lovers,” or “the fleeting lovers.” Either way, its formula of eccentric personalities thrown together on a journey and the revelations of their lives through story is as old (and as bawdy) as The Canterbury Tales.

The set-up is that a flight from Toledo, Spain to Mexico City has a landing gear problem and is going to have to crash-land back in Spain.  This equipment failure seems to be a secondary problem to the continual drama of the lives of the the two pilots and three gay flight attendants. This includes the head flight attendant, Joserra (Javier Camara) who is having an affair with the married, bisexual pilot, Alex Acero (Antonio de la Torre) and Joserra’s jealousy over the pilot’s brief, drunken sexual encounter with the co-pilot Benito Morón (Hugo Silva).

Meanwhile, in business class, there is a South American hitman (José María Yazpik), a Madrid Madame who, along with her employees, has given service to “the 500 most powerful men in the country” (Cecilia Roth), a dishonest capitalist (José Luis Torrijo), a philandering actor (Guillermo Toledo), and a virgin psychic (Lola Dueñas). Unsurprisingly, these people have their own problems, which they must face before facing their possible doom when the plane lands a wheel short. (The passengers and crew in coach have been slipped tranquilizers, knocking them out cold, conveniently avoiding any unnecessary plot interruptions with the main characters.)

The “virtues” and other nuggets of wisdom I learned from this film include:

1.)   It is not nice to drug people, whether by slipping them tranquilizers without their knowledge, or by giving them cocktails laced with mescaline, however interesting the results.

2.)   It is okay to down Tequila shots during work if you have a very stressful job.

3.)   If you are carrying out an affair with a bisexual married man, it is best just to talk things out with his wife. She’ll probably understand and perhaps take a lover of her own to balance things out.

4.)   Male flight attendants will always have several choreographed showtunes that they can dance/lip-synch to. If you’re bored or anxious on a flight, just ask them for a performance.

5.)   If a friend is being committed to a mental hospital, be nice and take away her pointy Chanel bracelet so she won’t hurt herself.

7.)   Always tell the truth—even if it’s about the affair, drugging the passengers or your drinking problem at work.

This last is demonstrated by the head flight attendant Joserra, who seems to be the only one capable of truth among this ragged bunch; for complicated reasons he explains in the film, he can no longer tell lies. But his truth-telling seems to actually be helpful in most situations, and it seems to be the running virtue of the film.

The truth is particularly important in modern-day Spain as embodied by the capitalist (with the fitting name Sr. Más – “Mr. More”). The plane has to crash-land at La Mancha Airport, which was built on a dishonest real estate deal by Sr. Más. It’s almost as though Almodóvar is giving virtue instruction to his home country, and indeed to anyone around the world who can identify with the broad types his characters play. For God’s sake, whether you have screwed up the world through your relationships, bad governing, dishonest business deals, or plain incompetence, just start telling the truth and taking responsibility for your actions.

It’s fitting that the movie’s most memorable moment, and the show-stealing scene that has been used in the trailers, is one of unabashed camp: the three gay airline stewards lip-synching to “I’m So Excited” by the Pointer Sisters.

Writer Philip Core has called camp (referencing Cocteau) “the lie that tells the truth.” Camp says something without saying it. Like a good drag act, camp conceals something artfully while revealing something artlessly. It softens the blow of the truth by making it absurd. It has been both salve and solvent for gay men for centuries, and, perhaps, with the wave of gay liberation cresting, straight people can now enjoy it too.

Or, as one of the flight attendants says when Sr. Más denounces their Pointer Sisters act as a disgusting spectacle, “Well, it’s always worked for us.”

Could be said for camp, or the truth.