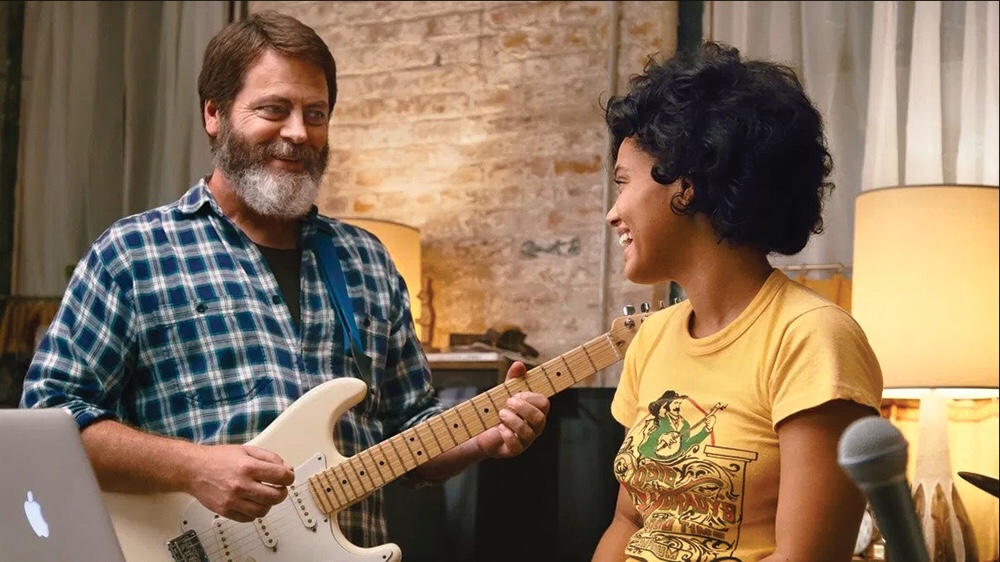 Making its SXSW debut after charming audiences at Sundance, Brett Harley’s “Hearts Beat Loud” is the perfect movie to celebrate as Austin transitions between the film and music festivals. A movie driven entirely by its love for song and the power it holds to hold us together, this is a film that wears its playlist as prominently as its heart upon its sleeve. With a plethora of beloved indie artists as well as some wonderful original songs by composer Keegan DeWitt, this film will delight music lovers as well as anyone looking for a family film that eschews cynicism for earnestness.

The film follows Frank Fisher (Nick Offerman), a father coming to terms with the impending departure of his college bound daughter, Sam (Kiersey Clemons). As it happens, this major event coincides with the closing of the record store he began with his late wife around the time Sam was born. While Sam deals with a budding but ultimately doomed relationship, she must also contend with her father’s desperate attempts to have them form a band like they did when she was a child. Despite her obstinance, the duo wind up creating the sort of music they need in their lives at that moment and, while Sam finds it to be a comforting diversion, Frank runs wild with ideas of a father/daughter touring act. Throwing their music on Spotify, Frank proceeds to gleefully drag Sam along with his daydream as it starts to gain traction, causing more strain in their transitioning relationship.

Although you can see the metaphors from a mile away, it doesn’t make them any less effective. Between the sincerity of the performances, the disarmingly natural dialogue, and, of course, the phenomenal soundtrack, this movie is unapologetically big hearted. Offerman is obviously having a blast playing the ultimate embodiment of “dad rock” (abiding love for Wilco, included), going for generously goofy without falling into cartoonish. Clemons, meanwhile, serves as the reasoned center among the absurdity and really shines as a burgeoning adult that strikes a perfect balance between childish rebellion and mature sincerity. It helps, of course, that Brett Harley and co-writer Marc Basch has created a family we truly want to spend time with and watch create as they grow.

About that soundtrack – ranging from the aforementioned Wilco to the stunning Mitski, the film is basically a survey of the most celebrated indie rock out there. While it includes a nice little thematic shoutout to Animal Collective’s modern classic “Merriweather Post Pavilion,” perhaps the best musical moment in the film comes in the form of effusive praise for Songs: Ohia. Any artist that promotes the gone-to-soon talent of Jason Molina is a-ok by me.

While the soundtrack itself is a delight, it also presents a rather honest look into the haphazard but necessary creation that music can sometimes demand. With a simple but sincerely profound explanation of why musicians create and why we are so intimately drawn into music’s ethereal poetry, the movie sums up its intentions:

“When life hands you conundrums, you turn them into art.”