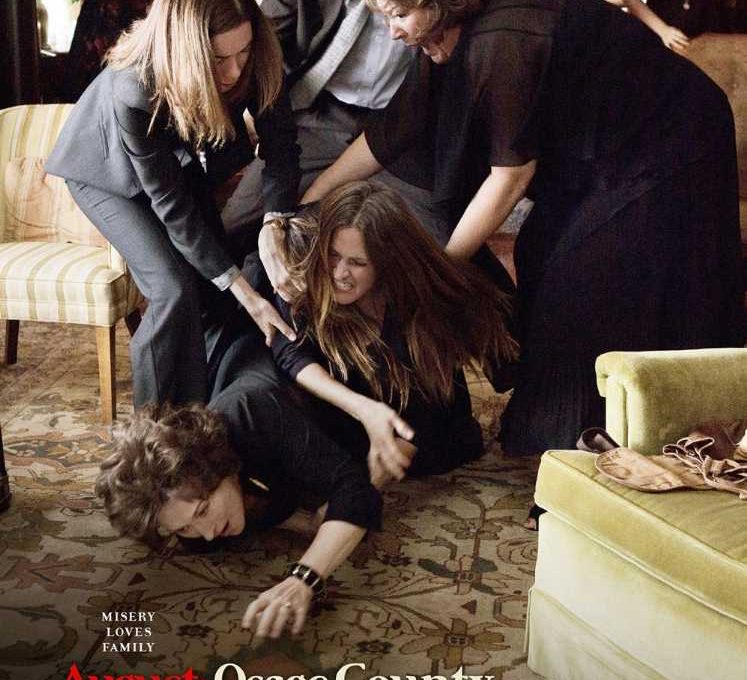 August: Osage County is the kind of drama that theater critics used to accuse gay men of writing in order to let out their aggressions against straight people. According to mid-20th century conspiracy theories, crafters of dysfunctional family dramas like Edward Albee and Tennessee Williams wrote of Martha and George, Blanche Dubois and Big Daddy to process their own unhealthy gay/family relationships, projecting their self-loathing onto “innocent” heterosexuals. Here we have a film, based on Tracy Letts’ Pulitzer Prize-winning drama, that has drunk deeply (or shall we say in this case, popped the pills) of the most Gothic portrayals of the American family, with nary a gay in sight—onscreen or off—to blame.

If you’ve seen any family drama on stage, television, or film in the last 40 years, you know what will happen next: stories will be told, generational rivalries will be exploited, and family secrets will be spilled. The big difference in August is the viciousness of the dialogue, the lack of love between the family members, and the desolation and loneliness that each is left with in the end. This is a family that desperately needs some ritual, some common narrative or idea to sew their frayed patches together. There is none. The only moment of attempted unity is an excruciatingly botched grace said over a family meal by Uncle Charles (Chris Cooper).

The film is overcast—that is, cast with too many stars in questionable character pairings. The only non-star in the ensemble is Margo Martindale, as Violet’s crass sister Mattie Fae. (She should have received a Best Supporting Actress nod.) The other actors, from Abigail Breslin, to Juliette Lewis, to Sam Shepard, not to mention Streep, McGregor, and Roberts, seem to arrive on cue like guest stars in a Hollywood Canteen movie from the 40’s. Just when you think the casting can’t get any more unnatural, Benedict Cumberbatch shows up as the idiot son. Sorry, B.C., but you can’t play Khan and Little Charles Aiken in the same year.

As every one of these esteemed actors tries to outdo each other with the gusto of their confessional monologues, it’s best just to focus on the mother-daughter death match between Streep and Roberts. Streep is at her Streepiest, disappearing into the role of a slurred and horrifying Mother Medusa who continually mistakes emotional abuse for “honesty.” Roberts is notable for how much she plays against type, never once cracking her America’s Sweetheart smile. Barbara is a chip off the old battleax, and can dish the abuse on her mother as much as she can take it. This is by far Roberts’ best and most emotionally demanding role in some time.

Many of these family dramas rely on a sense of claustrophobia: people stuck at gatherings where some sick sense of social responsibility keeps them there, even when the host or hostess has gone feral. In August, at least the film version, the claustrophobia is magnified not just by the hot, darkened house, but by the vast empty plains around it.

At one point, Violet seizes an opportunity to run from a stopped family car, escaping into the fields around her. Barbara chases after her, tackling her from behind. As they lie on the ground panting, she reminds her mother: “There’s nowhere to run to.”

The tag line of this extended family breakdown comes from Barbara, passing on her cynicism to her teenage daughter: “Thank God we can’t tell the future, or we’d never get out of bed.”

The line could just as well have been “Who’s afraid of Virginia Woolf? I am.” The lesson of this drama seems to be that sometimes it’s best to leave family stories untold, secrets kept, and honesty avoided.