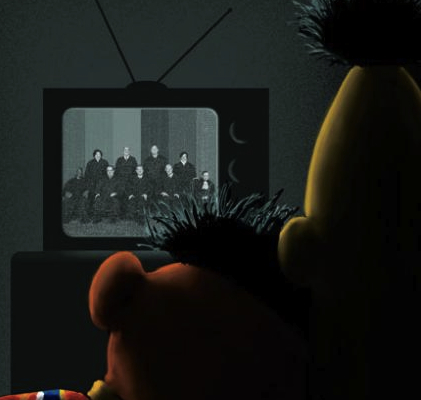 This week, the New Yorker came out with a cover that has already caused an uproar on the level of the of the Obama fist-bump cover in 2008. According to this illustration, Sesame Street characters and longtime companions Ernie and Bert have more than just a passing interest in the outcome of the DOMA case.

The rumors about Ernie and Bert’s sexuality have been around since at least the early 80’s (and for gay people, probably since the inception of the show in 1969).

As usual, however, we have the Religious Right to thank for interpreting these beloved characters as left-wing operatives, luring your children down the rabbit hole into a Godless world of homosexuality, free abortions for kids, communism, sharing, and compassion.

In this case, according to Muppetwiki, it was Rev. Joseph Chambers, a North Carolina radio minister who fulminated in 1994 that, “Bert and Ernie are two grown men sharing a house and a bedroom. They share clothes, eat and cook together and have blatantly effeminate characteristics. In one show Bert teaches Ernie how to sew. In another they tend plants together. If this isn’t meant to represent a homosexual union, I can’t imagine what it’s supposed to represent.”

Tend plants together! My God! Next they’ll be sweeping the front porch, washing the dishes, building a bookshelf from Ikea, or God knows what other perverted household chores those kind do.

The response to these accusations of homomuppetry from the creators of Sesame Street has hardly been inspiring. I once attended a talk by Frank Oz, the original puppeteer of Bert and creator of his character. I found Oz to be irascible and snappish, more like the high-powered Hollywood director he’s become than the creator of lovable creatures like Yoda and Miss Piggy. When asked the by-then-inevitable question about Bert and Ernie’s sexuality, he was just short of apoplectic. I can’t remember exact words, but he suggested the very idea was offensive—not just silly or an example of reading too much into things.

It would be fine if this were just the reaction of one difficult creative type to what he considers to be a misinterpretation of his work. But this has been a running theme among even liberal commentators in reaction to the Ernie/Bert relationship. June Thomas, culture critic for Slate.com wrote on June 28th that the New Yorker cover is “a terrible way to commemorate a major civil rights victory.”

‘Bert and Ernie are best friends. They were created to teach preschoolers that people can be good friends with those who are very different from themselves. Even though they are identified as male characters and possess many human traits and characteristics (as most Sesame Street Muppets™ do), they remain puppets, and do not have a sexual orientation.’”

Thomas further explains that Ernie and Bert’s longtime companionship, “doesn’t mean that every pair of cohabiting friends is madly making out on a nightly basis.”

The trademark on the term Sesame Street Muppets ™ should tell us a lot. Children’s Television Workshop and The Muppets are trying to protect a very lucrative product. This doesn’t explain why a lesbian culture critic, or the director of In and Out, would be so offended.

After all, several Muppets clearly have sexual orientations. On Sesame Street, Oscar the Grouch has a girlfriend named Grundgetta. The central relationship in the Muppet universe is the on-again, off-again romance between Miss Piggy and Kermit the Frog. I’m not aware of any radio preachers railing against this interspecies abomination. Nor am I aware of parents of preschoolers or the Children’s Television Workshop worrying whether these heterosexual relationships will lead to an assumption that the puppets are “madly making out on a nightly basis.”

I wouldn’t be so insistent on this if “best friends” and “don’t exist below the waist” weren’t classic evasions for explaining longtime roommate relationships between people of the same sex.

I think about the Presbyterian minister who baptized me when I was a baby—a man I was too young to know, but whom everyone in my church spoke of in my lifetime with great affection and respect. He also had someone he lived with, a handsome deacon in the church who, in those just-barely-post-Stonewall days, everyone assumed to be just his roommate and “best friend.” Then the deacon died. And everyone gave condolences to our pastor on losing his roommate; but our pastor could never speak about the true depth of his grief at losing the love of his life.

Or the two gentlemen who lived together down the street from me when I was growing up: one a funeral director, one a hairdresser. The hairdresser came around with bottles of wine, cigarettes, and smutty jokes for the desperate housewives of the neighborhood. “Doesn’t exist below the waist” might have been his moniker as well, as the wacky effeminate neighbor who lightened the world’s drudgery as long as no one thought about what his and the funeral director’s relationship was really all about.

The chief reason for people not wanting Bert and Ernie to be gay seems to be that they’re for kids, dammit, and therefore don’t need to have all that complicated sexuality stuff brought into it. But kids notice how adults structure their sexual relationships, even if they’re not yet fully aware of the range of physical expression of those relationships. Why else would Sesame Street have had Maria and Luis get married in 1988–after actress Sonia Manzano got pregnant–with as much fanfare as Luke and Laura on General Hospital?

You’re never going to be able to account for how a kid—or anyone else—interprets TV. It may be kids have been looking at Bert and Ernie for years and wondering if they were married. Perhaps, now that real structural changes are happening in society around same-sex marriage, these questions don’t need to be so awkward. Would it be so terrible if a preschooler asked a parent if Bert and Ernie were married and without batting an eyelash, Mom or Dad answered, “I don’t know. Some boys fall in love with other boys. Some boys fall in love with girls. What do you think?”

Or how about just answering, “Yes.”