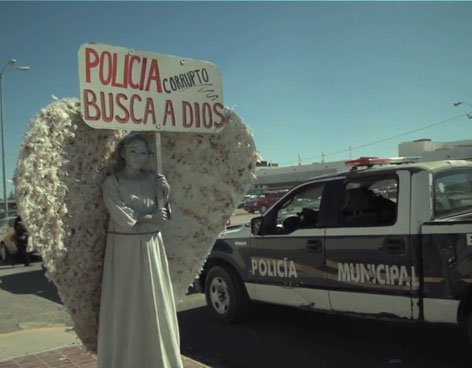 It’s a daring thing when a filmmaker asks you to “close your eyes” at the beginning of his film and dares you to imagine the way the world once was before we came along and screwed everything up. I use this verb intentionally because in his documentary, Purgatorio, Rodriguez Reyes boldly stares at what so many of us have closed our eyes to for far too long, the injustices of current immigration policies here in the U. S., corrupt political and social systems in Mexico, and the poor who risk life and limb to immigrate to the former from the latter.

Reyes’ film is not for the faint of heart. There are unflinching descriptions and images of horrific violence against animals, both human and non. Purgatorio is a personal reflection on the border, cast as a Dantean wasteland from which delivery seems hopeless. We meet nameless victims and those who would aid or hinder their flight (they are all nameless). One, a Christian man (?), leaves food and drink to aid lost or hungry travelers while another cleans up “trash,” essentially destroying the breadcrumbs that a network of migrants have left behind for their successors. We meet Mexican drug addicts and the other victims of the drug war, the law enforcement officers slain on duty and the family members they leave behind. Surrounding this police funeral, we hear accounts of corrupt officers who harass the poor. Reyes reveals the ways in which human corruption affects nature through pollution and death. An animal control center near the border captures 22,000 “wild” dogs every year and euthanizes 20,000. We see one close up and it is, to confess my guilt, more disturbing than the actual events and aftermath of human destruction we see on screen.

Purgatorio reveals, perhaps more powerful than any other film, the extent of creaturely brokenness here on our planet. Reyes does not trade in empty optimism or hope and leaves viewers with a lingering question that haunts just as effectively as the images that precede it. If there is any hope at all for our planet, it is that we as a parasitical species might eventually pass away.