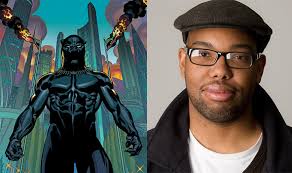 Two new series kick off today that are worth checking out…and are somewhat loosely related…Marvel’s latest installment of Black Panther and Image Comics’ The Fix. Black Panther boasts a new writer to the medium who writes extensively on issues of race and power, while The Fix is is a funny, and frequently disturbing, take on police corruption and abuses of power. Read on for more. 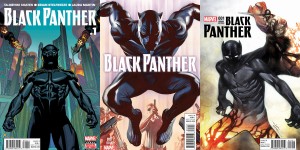 It’s a big day in the Marvel Universe as acclaimed author Ta-Nehisi Coates takes the helm of Black Panther. The much celebrated writer brings his cultural and political insight to bear on the superhero genre, but he hasn’t abandoned the core elements that a series like this needs. For those new to this character, don’t worry, there are only a few references to the larger universe and Black Panther backstories, and they don’t in any way prevent a clear understanding of what Coates is setting up here. This is very much a “pilot episode,” as we’re thrown into the kingdom of Wakanda where T’Challa (a.k.a. Black Panther) is king. Political uncertainties have made the citizens of this bastion of technology restless, and a mysterious group known as the People are moving among them inciting revolt and advocating for the overthrow of T’Challa.

There’ll be more to dig into in terms of narrative in subsequent issues, but, for now, it seems like we’re off to a strong start. Coates shows a real gift for dialogue, and the artwork by Brian Stelfreeze is a great mix of futuristic technology and rich African heritage. Coates’ Black Panther is definitely a series that comic fans and the literati can both rally behind. 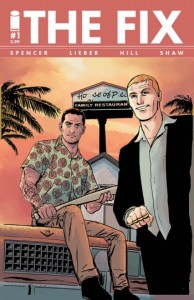 That the twist in The Fix, a new series from Image Comics and by artist Steve Lieber and writer Nick Spencer, happens so early in the first issue, allows the narrative to venture into social and pop culture commentary rather than simply being a crime mystery/thriller. As such, it’s simultaneously a fresh take on the cops and robbers genre and a reflection on corrupt power, police abuse, the changing nature of crime, and the role of media in fueling those issues and individual identities. It’s also (potentially) very offensive, hilarious, and boasts a K-9 drug dog as its hero.

The Fix is about two thieves who are also detectives. As it happens, they’re not really all that great at either job. They’re in for a lot of money to Josh, who turns out to be the director of Internal Affairs. Aside from the odd, small-time burglaries, they’re also networking with Donovan, a deranged Hollywood producer, who wants to capitalize on film adaptations of their capers.

It’ll be interesting to see where the series goes, especially after the second issue, which has been set up perfectly with a hilarious cliffhanger here in the first issue. The Fix feels like a Tarantino take on The Departed, with a dash of Cassidy from Preacher thrown into the mix with the Donovan character. The art has a cool retro feel to it that captures the atmosphere of a seedier L.A. setting.

Be on the lookout for the second issues of both The Black Panther and The Fix in print or digital download next month.