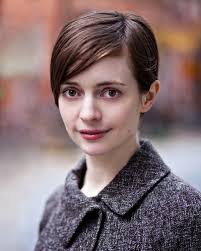 As big of a fan as I am of the post-apocalyptic genre (films, TV series, and novels), beautiful isn’t the first word I’d use to describe many of these texts. But it’s the first word I mumbled to myself as I finished Emily St. John Mandel‘s novel, Station Eleven.

At the beginning of Station Eleven, Arthur Leander, a famous Hollywood actor, dies on stage in a performance of King Lear. Less than two weeks later, 99% of the world’s population succumbs to a devastating flu virus. The novel picks up several decades after the initial outbreak and follows a travelling symphony and acting troupe, whose members perform works of Shakespeare for survivors huddled together in small villages around the Great Lakes area. One of the lead performers, Kirsten, has ties to that performance of King Lear, as does the Prophet, a typical post-apocalyptic villain with religious motivations, who terrorizes the communities that Kirsten and her colleagues entertain. 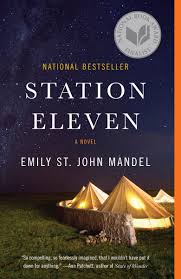 The connections between the characters in Station Eleven are one of the novels greatest strengths and provide the structure of the novel that bounces back and forth in time from the years before the cataclysmic event and the decades following it. These relationships are both fantastic and completely believable. The time we spend before the apocalypse, getting to know these characters, their histories, and their experiences makes the post-apocalyptic account of their lives all the more heart-breaking. Station Eleven is so rewarding not because its thrilling ending suggests a hopeful way forward for civilization (which is authentically earned) but because the characters arrive at clearer understandings of life…of who they are and their place in the world. For characters like Arthur Leander, these revelations come much too late. For others, it takes the apocalypse–or something like it–to refocus their attention.

Mandel does a nice job of weaving religion into the proceedings as the Prophet is fueled by a very surface, immature reading of Revelation. Without putting too fine a point on it, she suggests that little children and apocalyptic texts don’t mix very well. Again, we should be careful of what stories (biblical or otherwise) we teach our kids. But Mandel also reveals a keen awareness of what (post) apocalyptic literature should really be about. By foregoing lengthy passages with the bleak violence, cannibalism, and survivalist techniques that characterizes much of this literature, Station Eleven becomes a stronger, more haunting reflection on memory. Mandel’s description of civilization’s rapid demise and its survivors’ reflections on that loss provide revelatory moments for readers to pause and reflect on what they would miss and, by extension, what they should value now.

Station Eleven was a National Book Award Finalist in 2014 and is available widely in paperback or on Kindle and Google Play Books.