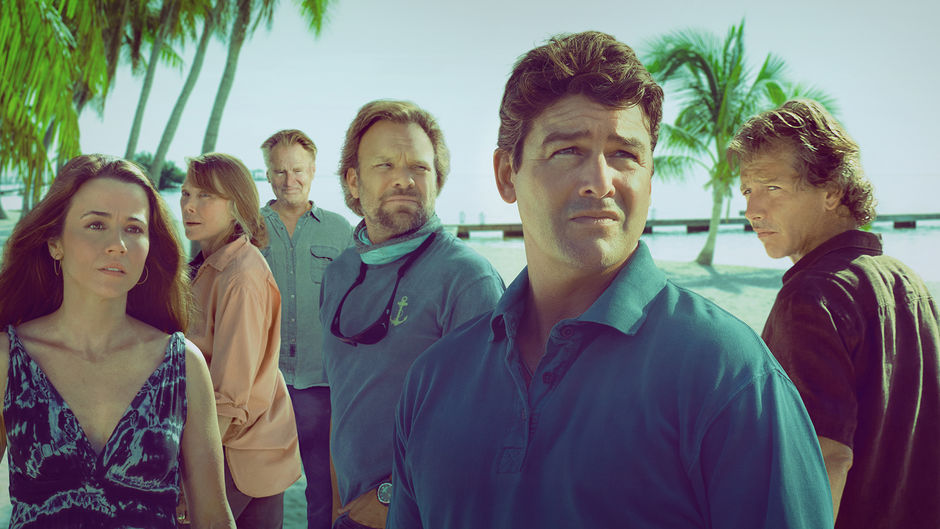 With so much good original Netflix content, you’d be forgiven for bailing on Bloodline after the first episode or two, especially when Daredevil released only a couple of weeks later. Bloodline‘s narrative starts slow, even if it is bolstered by stellar performances. If you’re patient enough, however, you’ll be rewarded with a story that rises to the level of its actors’ considerable talent. WARNING: A SPOILER-FILLED REFLECTION AHEAD.

Bloodline takes place in the painfully beautiful Florida Keys (I say painfully because every episode makes me agonize over why I’m slugging it out in Los Angeles and not simply working as a garbage man in that gorgeous place). It focuses on the Rayburns, a sort of first family in the region. Robert (Sam Shepard) and Sally (Sissy Spacek) Rayburn seem to have it all, a beautiful waterfront hotel, three successful children, a pier about to be named after them, and a seemingly endless supply of beer and booze. Their son John (Kyle Chandler) is a star detective on the way to becoming sheriff, their daughter Meg (Linda Cardellini) is a successful lawyer, and youngest son Kevin (Norbert Leo Butz) runs a boat repair shop. Everything seems to be moving along swimmingly until eldest son Danny (the stellar Ben Mendelsohn) returns and uncovers the dysfunction beneath the function.

Is it really spoiling a series in an article like this when the series itself spoils its own ending in the first episode? In it, we see John disposing of Danny’s corpse, and the rest of the episodes put the pieces together concerning how and why the family got to the point. We gradually learn that, as a teenager, Danny took younger sister Sarah out on the boat. A tragic accident occurred, and she drowned. As the series progresses, we learn just how she died but, more importantly, why they went out on the water in the first place. Overcome with grief–and anger–Robert blames his eldest son for Sarah’s death and beats the shit out of him, leaving physical–and emotional–wounds that still haunt Danny as an adult. No one ever took Danny’s side (Sally convinced the rest of the children to tell detectives that Danny had been hit by a car), and he eventually ran away from home.

When Danny returns to the Rayburn clan, he confesses that he’s really trying to turn his life around and wants to stick around and help run the family business, and, for a while, this seems to be the case. However, the rest of his siblings, knowing both what a perennial screw-up he is and the old secret he harbors, debate whether or not they want to welcome him with open arms. Meg, the executor of her father’s will, even knows that Robert wrote Danny out of it. Unsure of his commitment to the business, Sally pays Danny a meager salary until he proves himself. Needing more money, Danny falls back in with old friends and earns boatloads of cash stealing fuel, a crime that may or may not have something to do with an ongoing case that John is investigating involving two dead teenage girls. As the series progresses, Danny sinks deeper into the criminal underbelly of the Keys and begins to reveal his true motives for coming home.

At the heart of Bloodline is the theme of unresolved grief, particularly the devastation a family feels at the death of a young child. The loss impacts the family members in different ways: Sally, having resolved to leave the family just before Sarah’s death, is virtually comatose, Robert lashes out in violence and anger, and the confused siblings buy into a lie to protect the family, a lie that they feed for the rest of their lives. I’m intrigued by the ways in which film (and television) can best convey the lingering effects of trauma and grief, and Bloodline does a masterful job of showing how these continue to haunt the Rayburns like ghosts. Memories of past events and their younger selves break into the Rayburns’ daily lives seemingly without warning. They haven’t sought the professional counseling that might help address the pain and are even incapable of telling each other the truth.

Like the rest of the family, grief also haunts Danny, but he also bears the burdens of an unjust sense of guilt and an insatiable desire for revenge. Even decades later, the rest of the family–but Robert especially–stokes the flames of guilt, making it impossible for Danny to fully re-assimilate. This alienation–and Danny’s righteous anger–feeds his desire for revenge, which seems to intensify day by day once he returns home. As the series progresses, we quickly see that Danny’s brilliant (?) descent into a life of crime is all part of a master plan to bring down the rest of his family…to ruin their lives the way they ruined his. There is a guilty pleasure in the latter episodes of the series as Danny both stays just out of reach of the law–his brother–and implicates his siblings in his criminal activity.

Told this way, Bloodline poses a rather straightforward narrative, even as it makes smart use of flashbacks and flash forwards. But as the first season came to a close, I began to see Danny as less of a real character/person (even though he is that) and more as a ghost himself. When he and Sarah went out on the water all those years ago, although he came back, he died too. Through his literal disappearance from the family, he becomes a ghostly figure on which the rest of his family projects their grief, guilt, and fears. This works just fine for the Rayburns, until he actually shows up, and his physical presence serves as both a painful reminder and a prophetic accusation. Unable to accept him because they are unable to process their own grief and guilt, the Rayburns turn him into a scapegoat. In the image above, as John carries Danny to his watery grave, he might as well be carrying a sacrificial lamb.

Of course, Danny needs to be real as his presence drives the plot forward. It wouldn’t be too difficult to imagine that, had he stayed away, the family would still have broken down at any moment. The cracks are there from the start: Meg cheats on her boyfriend, unbeknownst to the rest of the family Kevin and his wife have separated, Robert suffers a stroke (no doubt hastened by Danny’s return), and John suffers from high blood pressure. Of course John and his siblings know that disposing of Danny hasn’t really solved the problem. It’s only added to the troubles that will drive them to drink and cheat and turn on each other. And, in a smart twist at the end of the last episode, we see that Danny has the last laugh after all.

Bloodline (60 mins.) is rated TV-MA for violence, language, and some drug use.