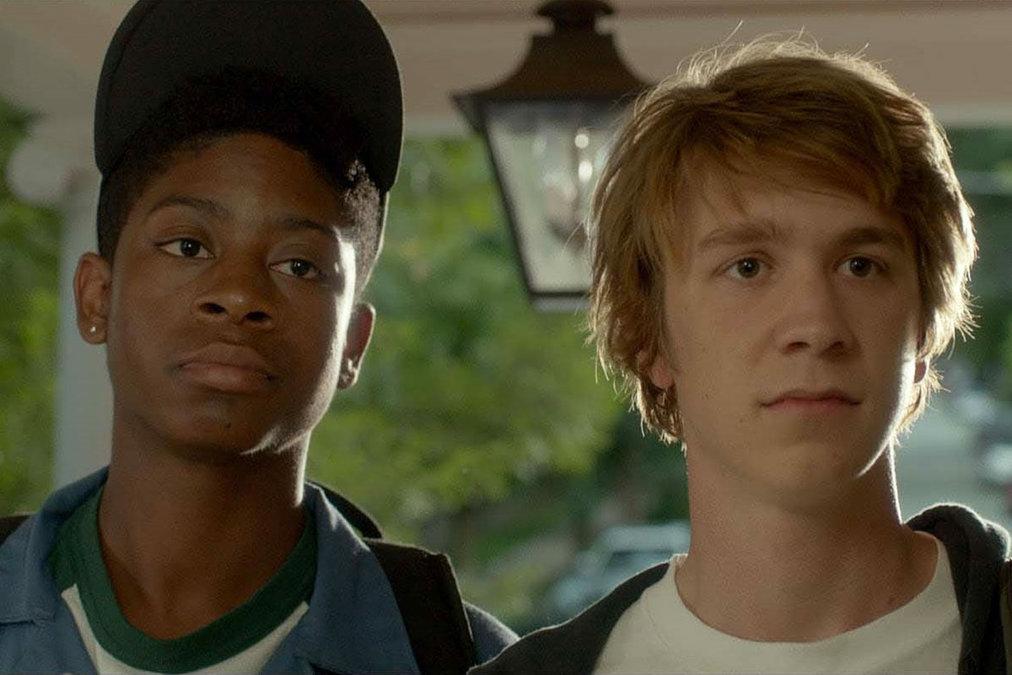 A few weeks ago, the Pew Research Center released their latest study on America’s changing religious landscape, which finds that young folks are not attending–or leaving–the church in droves. The “Nones” (or as George Clooney’s character, Ulysses Everett McGill, referred to himself in O Brother, Where Art Thou?, the “unaffiliated”) are on the rise. Christians of all stripes continue to speculate and worry about what this means for our future…another case of what Richard Lindsay likes to call BWAK (“but what about the kids?!”). If you get a chance to see the latest indie darling, Me and Earl and the Dying Girl, a smart, hilarious film that feels as timely as it is timeless, it might just give you hope that the kids, indeed, will be alright.

The Me in Me and Earl is Greg (Thomas Mann), a high school senior who belongs to no religion, I mean clique. However, like his sociologist father (Nick Offerman), he’s an astute observer of the social strata in which he lives and moves. He and his best friend Earl (RJ Cyler) are obsessed with not only watching films, but remaking, renaming, and starring in their own no-budget remakes of their favorite classics. Greg’s mother (Connie Britton) worries that Greg doesn’t have enough friends and pushes him to pay a visit to Rachel (Olivia Cooke), a fellow senior who has recently been diagnosed with leukemia. He whines a bit but eventually gives in. 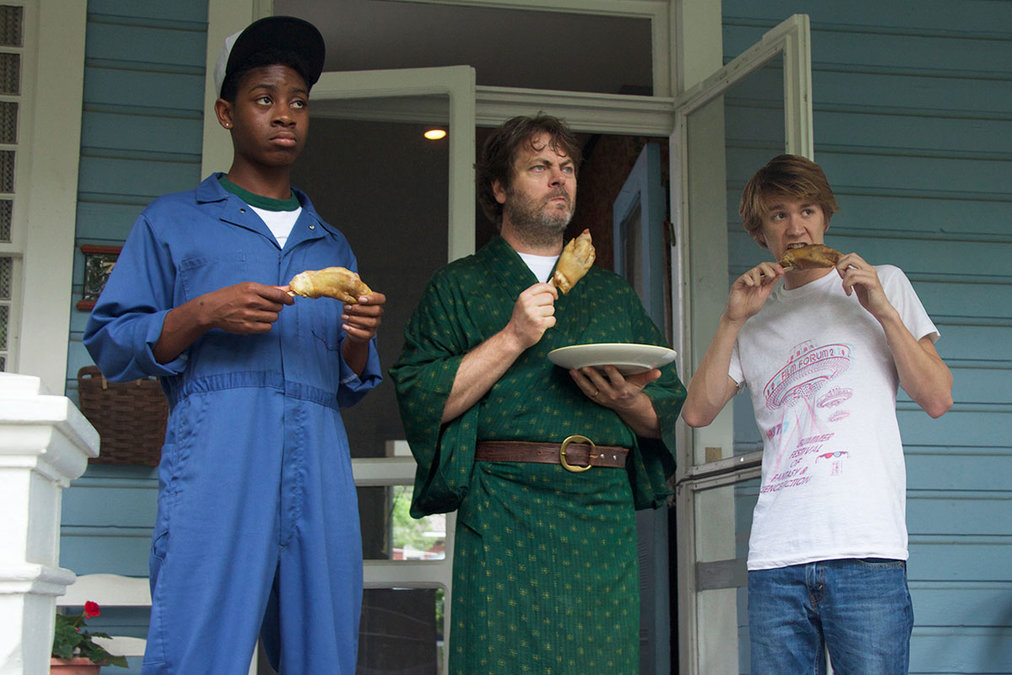 Greg and Rachel form a fast friendship. Their lengthy conversations would feel at home in any high school dramedy, but, somehow, feel more fresh and honest here. While Earl humorously encourages Greg to pursue more physical contact with any girl he encounters, he is perhaps more aware than anyone else of the deep emotional (and spiritual?) bonds that Greg and Rachel develop. A smart, promising student, Greg foregoes his schoolwork to spend more time with Rachel and dedicates his and Earl’s next film to her. Rachel sees that this is jeopardizing Greg’s college future and pushes him away (even as her condition gets worse). But Earl pushes Greg back, leading to one of the more beautiful scenes in film this year.

Me and Earl and the Dying Girl benefits from an intelligent script that is smartly shot. There are creative cinematic flourishes, but director Alfonso Gomez-Rejon and cinematographer Chung-hoon Chung know when to be still and let the script and actors do their thing, resulting in this great Scott Pilgrim vs. the World and old Hollywood mashup. And the actors are certainly stellar at doing their thing, as everyone turns in strong performances, but especially Cyler and Cooke. As a film itself and the filmmaking it features, Me and Earl and the Dying Girl reminds us that no-budget and low-budget filmmaking are still extremely fruitful avenues for creativity and spiritual connection. 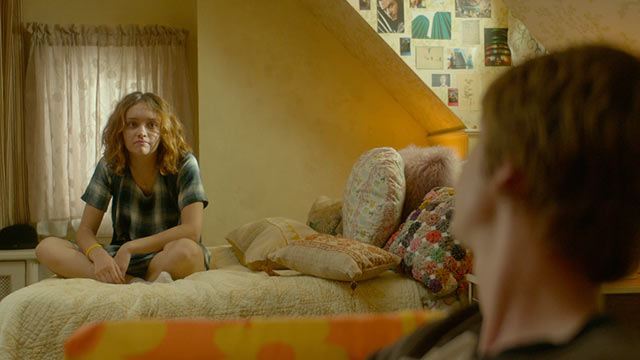 Me and Earl and the Dying Girl has much to say about religion and spirituality, even though none of its characters participate in organized religion or profess any type of faith, as traditionally defined. If we place it in conversation with the recent Pew findings, it is especially interesting. Greg is a “None” in the sense that he identifies with none of the cliques (religions) that make up his school’s social network, be it goths, nerds, jocks, etc. On the other hand, he sees value and worth in them all and knows just enough to communicate with and navigate between them in a friendly and peaceful manner. While his inability to commit might be a cause of concern for an older generation (his mother), there is a depth and intelligence in his ability to move seamlessly from one group to the next. He, like the Nones, doesn’t want to be tied down and certainly doesn’t want to be associated with groups that marginalize others. What would an entire high school of Gregs look like? Or better yet, what would it look like if more members of traditional cliques acted a little more like Greg?

In his book, Film as Religion: Myths, Morals, and Rituals, film and religion scholar John Lyden argues that popular films perform a religious function in our culture and, like more formal religious institutions, provide us with ways to view the world and values to confront it. Film-watching and filmmaking might be the closest thing that Greg and Earl have to a religion. They celebrate and revere the classics, but they are no mindless devotees. Rather than simply passively accepting what these films have to tell them about the world in which they live and how to move through it, they take these sacred texts and remake them, drawing meaning from those stories, but giving them new life and meaning through their interpretations. And in Rachel’s case, Greg and Earl’s film is more life-altering than any old Hollywood or art house film could ever be.

I understand, but don’t necessarily resonate with, those who wring their hands over the Pew findings out of fear for the future…and the children. It’s important to remember that churches and religious folk don’t have the market cornered on values, and that many families and kids are quietly serving their communities without any traditional religious input. I would agree, however, that “values” need to be planted and nurtured, and in Me and Earl and the Dying Girl, Greg’s mother is an example of this necessity as she forces Earl out of his comfort zone. Eventually diving into his mother’s “assignment” wholeheartedly, Greg’s schoolwork declines. But what he lacks in grades, he more than makes up for in empathy, compassion, and, I would argue, spiritual development. Should more of our schools offer courses on empathy and compassion? What if more high school seniors could boast recommendation letters like the one Rachel writes for Greg?

Me and Earl and the Dying Girl is a strong reminder that even though they might not look like us, sound like us, or believe like us, the Nones have much to teach us, if we would just listen…and watch.

Me and Early and the Dying Girl (105 mins.) is rated PG-13 for sexual content, drug material, language, and some thematic elements and is in theaters everywhere Friday, July 12.