Tony Jones and I continue our coverage of National Geographic’s new series, Breakthrough. Last night’s episode focused on the cutting edge research and development of bio-technology and cyborgs.

RP: So I’m still enjoying this series, and I think it’s partly due to the talent that they attach to each episode. I’d listen to Paul Giamatti read the phone book, so having him narrate and host an episode on biotechnology and cyborgs is a big plus.

The second episode, “More Than Human,” focuses on those scientists working at the “edge” of humanity, bridging the gap between biology and technology. However, as one scientist reveals, the distinction is not as clear cut. Our bodies are machines, our cells operate as machines, our brain is a plastic instrument that can be shaped by our experiences of the world around us and the technology we create and use. It asks one of the biggest questions: what does it mean to be human? 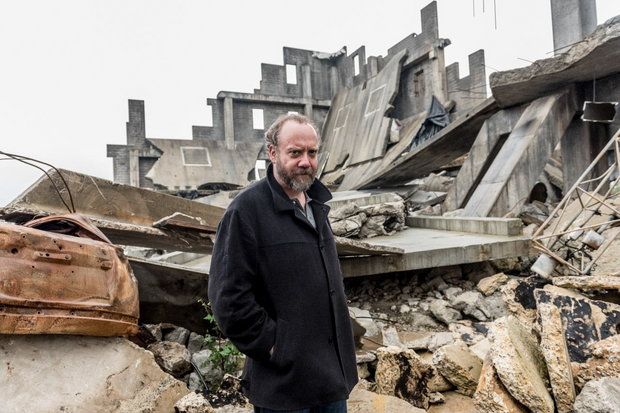 TJ: I completely agree about Paul Giamatti. I found this episode more compelling than the first, because we are walking through his experiences with him.

One thing that’s so fascinating in this episode is that Giamatti keeps asking scientists what amount to ethical questions: Should we be doing this? One tells him that this is inevitable—if he weren’t doing it, someone else would be. Another says that our advancements is simply another stage in evolution. When that Harvard scientist says that our evolution is “limitless,” Giamatti stops short. He’s the “everyman” in this episode, asking the questions that the scientist seem to have forgotten to ask.

Giamatti directed this episode, as you mentioned, and I love how he keeps hearkening back to 1950s era science fiction novels and movies. There are some great old clips, and the episode begins with him visiting a quirky bookstore that specializes in used Sci-Fi novels. All of this, I think, provides a great context to the overarching question: Are we becoming cyborgs?

RP: I love technology. I’m an early adopter. My wife isn’t. It’s just a difference in our personalities. So you can imagine how exciting so much of this is to me. But as a person who thinks about theology, religion, spirituality, ethics, and the like, some of this gives me pause. I’m not unaware of the pitfalls that accompany these advancements and that undergird Giamatti’s questions.

So, for example, when I hear exoskeleton designers talk about the advantages they bring for people like first responders, I celebrate this potential. However, when they say, in the same sentence, that it allows workers to use heavy tools for hours, I immediately think about the ways employers could use this to exploit workers (see the indie film, Sleep Dealer). Another scientist discusses the possibility of putting the entire Internet in our brains, and I think, what would the negative impacts be? If the episode is asking the big question of what it means to be human, then the other existential question that follows close behind it is, just because we can, should we?

TJ: Right. Think of the contradiction toward the end of the episode when Giamatti talks to director David Cronenberg. Cronenberg has made movies about technology going awry and damaging humankind, yet in the interview he says that he has a generally positive outlook on technology and believes it will solve many of our problems. It’s like the issues that he tackles in his movies don’t actually sift down into his actual life.

Many philosophers have considered these issues of where our bodies end and our technology begins. My only wish is that Giamatti had spoken to one of these philosophers instead of just scientists, many of whom seem not to have really asked these questions.

RP: That’s a great point because I think we’ll be hard-pressed to find a more spiritually relevant episode this season. This will sound cheesy, but two episodes into Breakthrough, and we’re already looking at people who are engaged in Christ-like work. We think about the miracles that Jesus performed: healing the sick, making the lame walk, giving sight to the blind. The scientists featured in this series are doing this. In this second episode an exoskeleton allows a paralyzed man to walk again, and the joy in his face is infectious. In another lab in Houston, scientists design a vest that transmits audio waves into sensory vibrations that allows a deaf wearer to “hear.”

The next episode of Breakthrough, “Decoding the Brain,” is likely to be equally fascinating. You can watch new episodes of Breakthrough on Sunday nights at 9 p.m. on National Geographic and catch up on past episodes online.