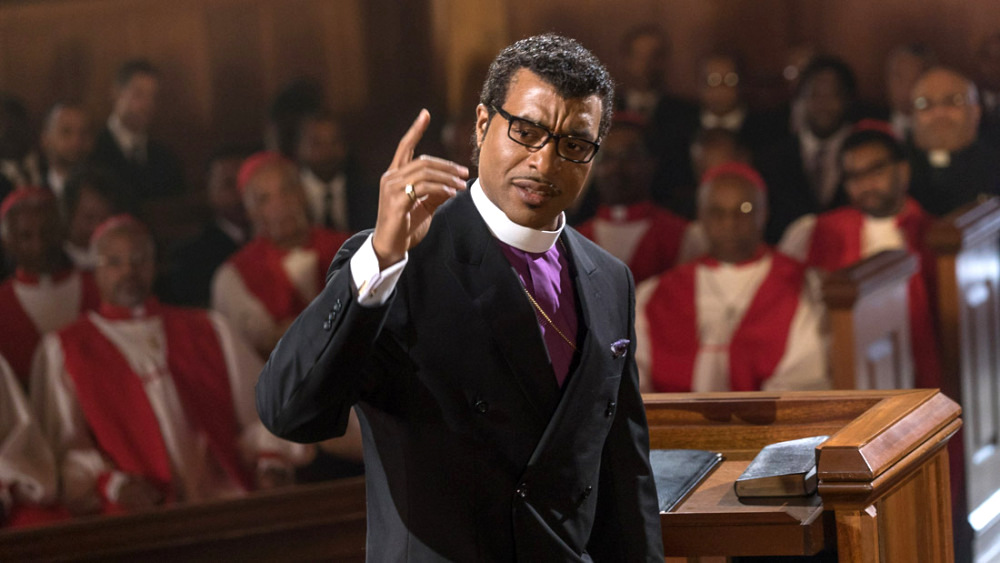 Some thoughts on Come Sunday, the story of Bishop Carlton Pearson, a megachurch pastor who lost everything when he stopped believing in hell. His story first received widespread attention after a 2005 episode of public radio’s This American Life. The film premiered at Sundance and is still available through Netflix

+ Bishop Pearson is played by Chiwetel Ejiofor, and he turns in the kind of nuanced, layered performance you’d expect from the Oscar-winning actor. Pearson’s charisma comes right through Ejiofor, whether he’s preaching in his church or, as in the opening scene, trying to save the soul of a stranger on an airline flight. Once he gets his revelation that God is not sending people to hell, he vacillates between a joyous relief at having a spiritual dilemma solved, and anguish over the effect this change is having to his friends, his family, and his church.

+ One of the elements that drives Ejiofor’s performance home is his singing. As with many Pentecostal preachers, Bishop Pearson is an accomplished gospel singer. As a British actor, Ejiofor has a wonderful speaking instrument, but his singing is an unexpected talent that adds tremendous strength to the role.

+ Condola Rashad plays Bishop Pearson’s wife, Gina. In large black churches, the pastor’s wife is known as the “first lady” of the church, and must be a model of Christian womanhood. In an early scene one of the Bishop’s assistants chides her that if she doesn’t know her scriptural references perfectly for a talk she’s giving to a women’s Bible study, her teaching won’t be considered authoritative. Gina is unhappy with her position in the church and seems to welcome her husband’s new teaching. But on the whole, her discontent and the strain her husband’s ministry puts on their relationship is never resolved in the film.

+ It’s a difficult acting role for Rashad, because Gina is expected to be a “submitted woman,” and can’t rely on the usual self-empowerment notes another character in her position might use. This leaves her mainly staring at her husband and swallowing her own reactions as he goes through his spiritual crisis, offering occasional words of encouragement. Rashad is an acclaimed actress with four Tony Award nominations, but the role of Gina doesn’t give her much to work with.

+ The most interesting relationship in the film is between Bishop Pearson and Oral Roberts, the Pentecostal televangelist. The film makes clear that Roberts saw Pearson as a son—perhaps even the one to carry on his legacy, rather than his own son Richard. Roberts’ fundamentalist theology cannot budge from the idea that all people must be “saved” from hell by an explicit act of conversion and confession of belief in Jesus Christ. Person’s shift toward a more universalist theology undercuts the foundational belief of this view of Christianity.

+ The scenes between Ejiofor as Pearson and Sheen as Roberts remind me of the kind of excruciating coming out conversations that happen between parents and LGBTQ children. Roberts goes through similar stages of denial—the hope that Pearson is just confused or going through a phase. Eventually, Roberts cuts off his relationship with Pearson, which is unfortunately how some of those coming out conversations end. Later in the film, Bishop Pearson comes to understand and accept his music director as a gay man, seemingly from understanding how it feels to be rejected by a father figure for being true to himself.

+ After all the effects of Pearson’s revelation shake out, after most of his members have abandoned his church and even the church property has been sold, Roberts invites Pearson to his office for one more conversation. In this scene Roberts makes an interesting statement, “If there was one thing that made me want to consider everything that you were preaching, it was how lonely God must feel denying his own children.”

+ This really gets to the stakes of hard-core evangelical theology. People who believe in it know who among their family or friends died not being saved. In Bishop Pearson’s case, it was his uncle Quincy. In Roberts’ case, that was his son Ronnie, who was gay, had addiction problems, and committed suicide. When Pearson is summoned before the Council of African American Bishops, he challenges their chairman Bishop J.D. Ellis (played exquisitely by Vondie Curtis-Hall) if anyone he knows is in hell. Bishop Ellis replies, “My Daddy is in hell.

+ To believe in this kind of theology is to live in constant fear that the ones you know and love, even people you just happen to like, are destined for eternal judgment unless they turn themselves over to Jesus. There is no mercy in this system, no sense of God as a just judge weighing the positives and negatives of a life, just fire and brimstone for anyone who doesn’t hold to the right creed. This seeming divine cruelty is why Bishop Pearson—and why many of us—have had to imagine a more expansive theology in order to maintain a concept of a loving God.

+  Still, it’s pretty rare to have a Hollywood film based on atonement theory. I hope some of my more secular friends will stumble on this film on Netflix. It’s a good story about the possibility of change and conversion, even for the most hide-bound beliefs. It’s an important representation of the broad range of ideas about God, forgiveness, and judgment that different Christians believe. Most of all, it explains a lot about evangelical thinking. If charismatic, soul-saving evangelicals can be obnoxious to outsiders, seemingly obsessed with converting everyone to their version of the faith, they are that way because of a genuine sense of concern and even fear. If they don’t preach the Gospel and the people they know and love go to hell, they are the ones who will feel responsible. And that’s a terrible burden for anyone to have to carry.