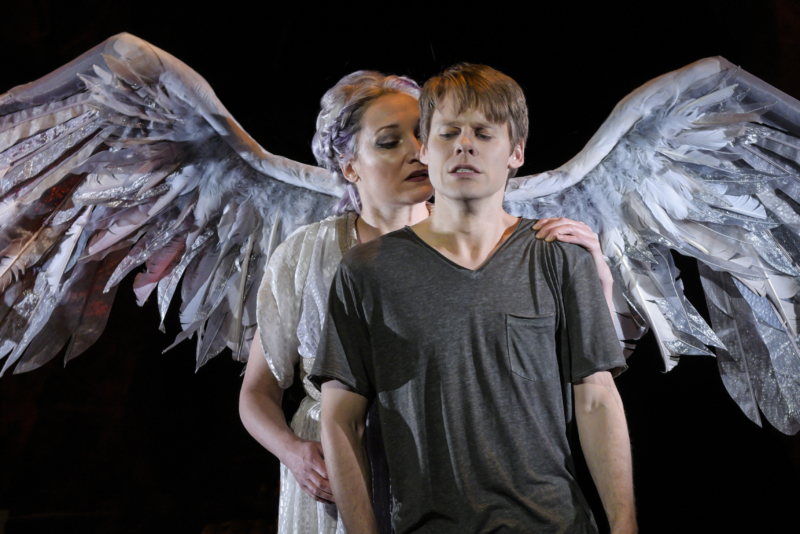 The cultural highlight of this year for me was witnessing live performances of Tony Kushner’s Angels in America, two plays that had high-profile revivals on Broadway and at the Berkeley Repertory Theatre. The Broadway version won a raft of Tony Awards and starred Andrew Garfield and Nathan Lane. The Berkeley version which I saw starred Randy Harrison and Stephen Spinella.

With the current presidential administration destroying political norms, violence against immigrant communities, police brutality against people of color, and the threat of global climate change, it is time for an apocalypse—not a theo-historical event, but a rediscovery of the apocalyptic genre as a literature of hope and liberation. In New York and Berkeley, this has already happened this year, in the form of high-profile revivals of America’s own dramatic apocalypse, Angels in America, by Tony Kushner.

When Angels in America, Part I (Millennium Approaches) and Part II (Perestroika) were first produced on Broadway in 1993-94, it was known as “the AIDS play,” a drama that addressed the plague that had decimated the gay community and the world of theater. Kushner’s protean vision for Angels in America, however, took on a raft of issues essential to the American experience, including race, religion, migration, the environment, and competing visions of democracy. Even though conditions have changed dramatically for people with HIV/AIDS, Angels is still a deeply relevant work in an endlessly evolving country.

The plays, set mostly in New York City in 1985-86, follow protagonist Prior Walter, who is diagnosed with AIDS, which, at the time, was equivalent to a death sentence. Unable to handle Prior’s illness, his lover Louis leaves him. In his loneliness and illness, Prior has a vision of an angel who breaks through the ceiling of his apartment, shouting, “The great work begins!” The Angel, who identifies herself as the Continental Principality of America, tells Prior he is a prophet, and that he must bring a message to humanity: God has become fascinated by the human capacity for change and migration, and following our lead, has abandoned heaven. The Angel’s revelation to Prior is that humans should stop migrating and changing, with the hope that God will return and restore order to the universe:

“You have driven Him away! You must stop moving! […] Forsake the open road: neither mix nor intermarry: let deep roots grow: If you do not mingle, you will cease to progress[…] You cannot understand, you can only destroy, you do not advance, you only trample. […] Hobble yourselves!”

Angels in America is not only apocalyptic in its worldview, it also closely follows the pattern of the biblical apocalyptic genre. Yale Hebrew Bible professor John J. Collins characterizes apocalypses in his book, The Apocalyptic Imagination (Eerdmans, 2016) as:

“A genre of revelatory literature with a narrative framework, in which a revelation is mediated by an otherworldly being to a human recipient, disclosing a transcendent reality which is both temporal, insofar as it envisages eschatological  salvation, and spatial insofar as it involves another, supernatural world.”

Angels in America is indeed revelatory, exposing the cause of the spiritual crisis of AIDS and the larger spiritual crisis of America. Prior Walter, the human recipient of this narrative, is a prophet in the mold of Daniel, Enoch, or John. The Angel, the otherworldly mediator, is a “Principality,” like the heavenly “Princes” of Persia and Greece mentioned in Daniel 10: 20-21. In apocalyptic literature, the conflicts between nations on earth often reflect greater cosmic conflicts in heaven.

The final act of Angels takes the plays into the territory of the transcendent, temporal, and spacial, as Prior Walter, like Enoch, ascends to heaven. There he finds the council of angels representing all of the continents, buried in stacks of paper and arguing with one another—a vast bureaucracy in disarray. The eschatological salvation is not given by the angels but taken in Prior’s reclamation of power from the angels’ fear of change. In defiance of their disapproval, and despite his own suffering, he demands a blessing:

“I don’t know if it’s not braver to die. But I recognize the habit. The addiction to being alive. We live past hope. If I can find hope anywhere, that’s it, that’s the best I can do. It’s so much not enough…so inadequate. Bless me anyway. I want more life.”

Most American Christians have falsely taken apocalypse to be a prediction of the future, and look to its signs and symbols as a kind of fortune telling. In doing so, they miss the primary benefit of apocalyptic literature: its prophetic naming of the pain of a community and the transformation of that struggle through narrative. The hope and healing—even liberation—that comes from apocalyptic literature is that it takes our earthly pain and gives it a cosmic context, like the angelic principalities that fight wars in heaven on our behalf.

Several of Angels in America‘s supporting characters particularly speak prophecy to contemporary struggles. The villain of the plays is Roy Cohn, the Manhattan lawyer and McCarthy henchman who was also Donald Trump’s mentor. He, too, is dying of AIDS, but less honorably: he refuses to admit he is gay and insists his doctor list his diagnosis as liver cancer. He practices bigotry against his enemies and gaslights his friends. Echoing the current president’s disdain for the rule of law, Cohn brags about how he broke the law to get convicted spy Ethel Rosenberg executed in 1953:

“That sweet, unprepossessing woman, two kids, boo-hoo-hoo, reminded us all of our little Jewish mamas. She came this close to getting life. I pleaded till I wept to put her in the chair. […] You want to be nice or you want to be effective? You want to make the law, or be subject to it? Choose!”

Ethel Rosenberg is a character in the play, and her ghost haunts Cohn at the time of his death. In one of the play’s most moving scenes, she helps Louis sing the Kaddish, or Jewish prayer for the dead, for Cohn,.

Kushner was prescient not just in his portrayal of Trumpian figures like Cohn, but in The Angel’s answer to the ills of America: the end of migration. Although she doesn’t spew the venom of Roy Cohn or Donald Trump, she is nevertheless a “cosmic reactionary,” as Prior labels her. She cannot cope with change and so she tries to prevent it. In the same way that Trump supporters want to build a wall they think will stop migration and keep America a majority white country, The Angel wants to stop time.

Another character, Belize, a gay black man and Cohn’s nurse, is a heroic representative of America’s racial struggle. Belize suffers not only his patient’s overt racism, but the passive racism of his white friends who fail to understand their own privilege. Scenes between Belize and Louis reveal how white America thinks it has invented a just and righteous society in which racism can be banished with big ideas like “freedom” and “justice”. After several frustrating conversations, Belize finally lashes out at Louis:

“Well I hate America, Louis. I hate this country. It’s just big ideas, and stories, and people dying, and people like you. The white cracker who wrote the national anthem knew what he was doing. He set the word “free” to a note so high nobody can reach it. That was deliberate. Nothing on earth sounds less like freedom to me.”

Meanwhile, Belize attempts to keep Prior from descending into prophetic madness as he faces his doomed future. Hearing Prior’s message from The Angel that human beings should cease migrating, Belize objects: “Don’t migrate? Don’t mingle? That’s kind of malevolent, ’cause, you know, some of us didn’t exactly choose to migrate, know what I’m saying. […] But see that’s just not how it goes. The world doesn’t spin backwards.”

The conversations between Louis, Prior, and Belize anticipate our current moment in which white liberals have had to revisit our assumptions about race in a country that was supposed to be “post-racial” after the election of the first African-American president.

Biblical scholars have commented on the worship elements of the biblical book of Revelation. Viewing the seven-plus hours of Angels in America has a similar ritualistic feel. We begin to get the sense of a liturgy (“The great work begins!”) of purgation and cleansing, the elevation of the host of human failing and the destructive desire to stop history (“The world doesn’t spin backwards”). The ritual ends not so much with an act of absolution as with a continuation (“More life”). In a universe in which the only constant is change, in a country that has perhaps embraced this constant more than any other, “More life” has to be our continuing prayer.

To some people it sounds depressing — this idea that God has abandoned heaven leaving only incompetent lesser spiritual beings in charge, but it doesn’t feel that way watching Angels. I heard several audience members talking about how hopeful it is. I think some of that is simply the relief of being heard. The best theater lifts up the joy and failure of human life in all its messiness in a way that sparks recognition.

As the Broadway and Berkeley productions have brought more life to Angels in America, expect regional and community theaters, colleges and universities to add it to their performance schedules over the next few seasons. Go see it. It is an apocalypse that may or may not signal the end of the world, but does offer healing, hope, and insight. Even in an era when history is moving too fast for us to understand.