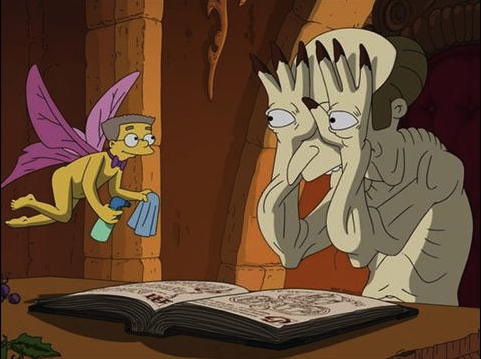 No big surprise, but the photo above is of Guillermo del Toro’s house, which he calls Bleak House. Director del Toro had one of the biggest hits of the summer with Pacific Rim. He recently directed the spectacular title sequence for this year’s installment The Simpson’s Treehouse of Horror, with multiple horror and fantasy movie references–both old classics and recent classics from del Toro.

Due out just before Halloween is Guillermo del Toro’s Cabinet of Curiosities: My Notebooks, Collections, and other Obsessions, which is a collection of his heavily illustrated notes — jottings in Spanish, English, and Latin, and drawings–that look like an illuminated manuscript from a deranged monk.

See more on del Toro’s 2007 classic Pan’s Labyrinth, on which I have published both in this blog and in the Journal of Religion and Film.