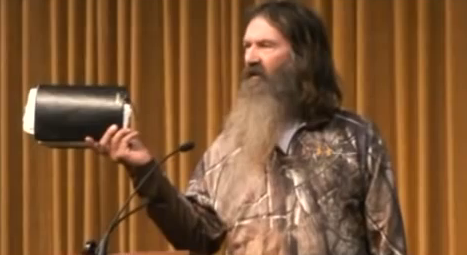 “We’re believers in the Lord. We think he set this all up for us.” – Phil Robertson

Apparently, Phil Robertson, patriarch of the Duck Dynasty clan, was the hardest sell when his son Willie came to him with the idea of promoting the family business on a reality TV show.

With characteristic gruffness, Phil responded, “I’m already as famous as I want to be.”

Willie explained to him that the show would give him a broader “platform to talk about the things you like to talk about.”

The things Phil wants to talk about are hunting and Jesus Christ. For Phil the two are closely related.

His bio on the Duck Commander web site states unequivocally:

“In the mid-70’s, Phil turned his life over to the Lord and made some dramatic changes in the way he was living. Phil Robertson is not only known as the Duck Commander but is now building a reputation all over the country for his faith and belief in the Almighty.”

Since the runaway success of the show, Phil has become a sought-after speaker in evangelical churches. Several of these sermons have made it onto YouTube, and unsurprisingly, Phil is a fiery preacher.

In 2010—pre-Duck Dynasty days—Phil Robertson gave a sermon at the Berean Bible Church of Pottstown, PA. (The event was a “Wild Game Supper” and included a prize for best taxidermy.) Phil came to the event in his best swamp man getup: camouflage from head to toe—none of the sunglasses and bandanas that Duck Dynasty has made trendy.

In the course of the sermon, Phil places himself in the line of the Founding Fathers— Washington, Jefferson, Monroe—whom he says were all “Godly men,” and founded the United States on Biblical authority. (I wish to the Creator someone would explain the word ‘Deism’ to some evangelical Christians who are convinced of the Founders’ religious fervor.) Phil goes on to denounce abortion, homosexuality, big government, and, of course, animal rights activists.

His interpretations of both the Bible and America’s founding documents are idiosyncratic, to say the least. Explaining his concept of the “pursuit of happiness,” Phil says, “In my case, it makes me happy to blow a duck’s head smooth off from about 10 feet.”

He then brings up Genesis 9:9, God’s post-flood instructions to Noah:

“And God blessed Noah and his sons, and said unto them, Be fruitful, and multiply, and replenish the earth. And the fear of you and the dread of you shall be upon every beast of the earth, and upon every fowl of the air, upon all that moveth upon the earth, and upon all the fishes of the sea; into your hand are they delivered. Every moving thing that liveth shall be meat for you.”

Phil adds “alligators and bullfrogs and such” to the list of wild delicacies available to Noah and his sons.

Phil’s interpretation of that passage: “Here’s the deal: You got orders from headquarters that says if it walks, crawls, flies, or swims, whack ‘im and stack ‘im, and eat ‘im!”

This line goes over like gangbusters with the Jesus-loving hunters in the audience. It has become apparent both on the show and in his sermons that Phil has memorized most of the portions of the Bible that have to do with hunting or eating meat.

Then his exegesis takes a turn toward the problem with disobeying God’s “orders from headquarters” to hunt and kill animals for food. Failure to have a right relationship with animals causes disorder in the cosmic system; and it’s only a matter of time before Phil’s quoting from Romans 2:23-27

“And changed the glory of the uncorruptible God into an image made like to corruptible man, and to birds, and four-footed beasts, and creeping things. Wherefore God also gave them up to uncleanness through the lusts of their own hearts…For this cause God gave them up unto vile affections: for even their women did change the natural use into that which is against nature: And likewise also the men, leaving the natural use of the woman, burned in their lust one toward another…”

“Gross. Sexual. Immorality.” Phil pronounces. “Is that going on in the United States of America? Look around!

“God’s not there, we have all the answers…don’t hurt a little bird or an animal…and BOY is there some immorality goin’ on around here!”

In case you’re scoring at home, Phil Robertson just blamed homosexuality on a lack of hunting and fishing.

For Phil, all these issues he sees as problems—abortion, homosexuality, government overreach—come from falling out of right relationship to the natural world. Living off the land, hunting and fishing for food, maintains a hierarchical order with God at the top, man in the middle, and animals below.

Women, in Phil’s view, have a “natural use” which is child rearing and housekeeping.

At this point, according to the Coastal Liberal Activist Playbook, we should be calling for a boycott of Duck Dynasty.

Painting Phil with a Fine Brush

I consider myself a coastal liberal who has somehow accidentally ended up on the Third Coast in the Deep South. I like Duck Dynasty because it’s a window into life here – the hunting and fishing “redneck” culture that my friends in the Blue States often don’t understand.

Watching the show, your first reaction may be to mock the “backwards” ways of the Robertsons, but hearing them talk, you quickly become impressed by their intelligence, wit, and self-awareness. Although the Duck Commander boys, Willie, Jase, and Jep, are cast as more aware of the world around them, spinning off pop culture references along with their redneck philosophy, Phil is kind of an Archie Bunker figure. Traditionalists can look at him and say, “Right on, brother,” while sophisticates can chuckle and say, “What a character.” This cross-partisan appeal may be a large reason for the show’s success.

But when you live in the Deep South, you often find yourself in public spaces and social situations with Phil Robertson types—albeit a bit more cleaned up in “cosmopolitan” Lafayette, LA. Suddenly, these God-loving, gun-hauling, live-off-the-land libertarians are your neighbors.

This does not mean I am not aware of the rest of the picture. I understand the Phil Robertsons of my town hold views about the economy, religion, and social relationships that I cannot agree with, and will continue to work to oppose.

But I rub elbows with these folks every day. I park my Honda CR-V with its Obama sticker next to their massive, muddy pickup trucks outside my favorite burrito place. I see a popular bumper sticker around town that says, “Kids who hunt and fish don’t steal and deal.” Some of the young men around here wear duck calls around their necks, have deer antler tattoos, and think boots and camouflage are a fashion statement. I teach them in my speech class at the University and try to help them soften their Cajun accents just enough that people outside Lousiana will be able to understand them.

This is not a call to abandon the cause of justice. But while we may paint justice broadly, we need to have pointillist personal relations. This is the true meaning of tolerance and liberality—not that you agree with me on all parts of my agenda, but that we see our agendas in the context of relationship and community. If we interact only with people that agree with us politically, than we really are practicing the violence of objectification—using people only insofar as they are useful to us.

I’ve come to have a lot of sympathy and understanding for people like Phil—white people, Southerners, folks over 60—whose way of life seems threatened. The threat is both less dangerous than they imagine and presently real. When I can walk across campus at the University and see a lesbian couple holding hands, or the now-common sight in the South of interracial couples, or teach classes with distinct majorities of women, many of whom are seeking careers in engineering and medicine, I know Phil’s ordered and unbreachable hierarchy is really beginning to break down. I don’t have to agree with him to feel compassion for the loss he feels.

I choose not to reject Phil, or his those like him, because to do so would quite literally be to reject my neighbor. There’s another section of that sermon in Pottstown, PA, where Phil demonstrates his duck calls, many of which he invented himself. He explains the different species the calls are meant to emulate and attract. It’s really quite charming. I had a student in my speech class do a similar demonstration and it brought down the house.

So I continue to enjoy the wisdom Phil shares on the show. One of my favorite quotes of his is from a couple of episodes ago: “Two things take patience: people and mahaw jelly.” I know what Phil stands for—I’ve seen his “big picture” and I don’t agree with it. But, like so many of my neighbors, I choose to paint him with a narrow brush and focus on what I like about him. I think it’s the only Christian thing to do.