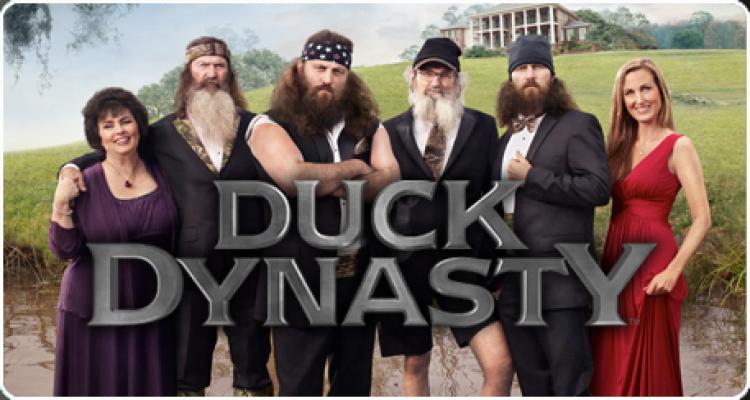 Set-Up: Duck Commander employee Godwin says he wants to buy a hot tub (with speakers) and needs the boys to help him find it and move it to his house. Phil has Willie’s kids over and tries to teach them a lesson in patience.

Hilarity Ensues: With a $200 budget, Godwin’s options for a hot tub are limited. As Willie says, “I’m not sure you can afford the speakers but you could park your truck by it.” They decide to go to a junk dealer named “Squirrel” to get a used model. The loading and unloading of the hot tub onto a trailer pulled by Willie’s truck, with Uncle Si directing, is an opportunity for much Laurel-and-Hardy-style physical comedy.

Jase, who is fine with crawling through swamps and catching live frogs to eat is suddenly squeamish at the idea of Godwin buying a used hot tub. He continues to predict doom, telling Godwin he will get hepatitis from the tub and get his hair stuck in the drain. Godwin reminds him that he doesn’t have any hair.

Meanwhile, Phil brings three of Willie’s kids—‘Lil Will, John Luke, and Bella—over to harvest mayhaws, a fruit that grows wild on the Robertson property. As usual, this is an opportunity for Phil to try to pass on his backwoods wisdom to his “fresh off the subdivision” grandkids. As Phil says, “My grandkids are suffering from a personality crisis. That means they don’t have one.”

Phil is kind of like Tevye in Fiddler on the Roof, trying to pass on traditions to the next generation that he fears are dying out. The scenes of mayhaw harvest, and then Phil teaching the kids about patience as they wait for the mayhaw jelly to cook, are quite touching. Phil tells them that in life, “Two things require patience: people, and mayhaw jelly.” As the kids’ smiles reveal when they taste the jelly, both are worth the time you spend.

This scene reminds me of picking apples on my grandparents’ property in Virginia when I was a kid. We had to gather up buckets and buckets of little green apples off the ground to go into my grandmother’s pies and canned applesauce. The apples had a slightly sweet rotten smell and had clusters of bees on them. Some of my cousins took the opportunity to start apple fights.

When spouses have joined the family via marriage, the joke among my cousins is that they have to log some hours picking apples before they can truly be kin. (My grandparents have passed on and the property has been sold, so I’m not sure how this would happen.)

I hate to admit it, but Phil is right. These kinds of experiences build character, patience, and form bonds between family. As he says to the kids, “It’s a mayhaw-pickin, going back to your roots.” Roots are important in an increasingly fragmented world.

Is this for real? ‘Lil Will makes an appearance in this episode. He’s the adopted younger teenage son of Willie and Korrie, and is rarely on shown on the program. It’s a good question in a family-based reality show what kind of effect it has on family members that may not want to participate. There’s such a blurring of family life and the “characters” the show portrays that it must be a disorienting for kids who are just trying to figure out their identities. Maybe sociologists and psychologists should do studies of the effects on children that have grown up on reality TV.

The Christian Angle:  The blessing over the family dinner at the end includes Phil thanking God for the “mayhaw jelly that you raised up out of the wild.” As he says to the kids while they’re making the jelly, “The woods provide, never doubt it.” There’s a hunter’s spirituality to the show, that the fullness of God is best experienced in living close to the land. The woods and Providence have a certain mystical equality. In addition to providing nutrition, the food that the land/Providence brings forth forms a ritual glue that binds the family together. It seems Phil has the most appreciation for this orientation to God, land, and family. Followed by his oldest son, Jase, who sometimes refers to the woods as “God’s grocery store.”

The Wrap-Up: Si reveals his nickname on the high school football team was “Killer-Cat Robertson.” What more needs to be said. Duck Dynasty is on every Wednesday at 10pm Eastern, 9pm Central on A&E.