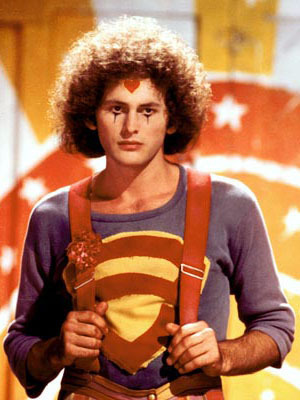 “My hope for the church is for it to become Gospel-saturated and focused on the fact that Jesus is the Hero of our story, not us. He is Superman; we are Lois Lane…”  — Rev. Matt Cannon, Lee Village Baptist Church, Harriman, TN. Answer to “What is your hope for the Church?” comment section on Christianity Today.com.

Rev. Cannon’s comment is surely one of the stranger interpretations of the “Church as Bride of Christ” metaphor in Ephesians 5. But the tendency to cast Jesus as Superman is a common one. After all, Superman is a superlative figure—he represents our fantasies of the greatest, the best, the strongest being in the universe. So why not cast Jesus as the real superlative—the one who is really the greatest, the best, and the strongest being in the universe?

Because it makes for lousy theology. So here are five reasons why Jesus is not Superman.

1.)   Jesus did not fight for truth, justice, and the American Way. I know many of my fellow Christians in this country will find this shocking, but Jesus wasn’t an American. I am not saying this just to be glib.

One of the particular forms of hubris of all empires is their belief that the god of their age favors them as the most powerful nation on the planet. It was what people of the British Empire thought; it was what people of the Roman Empire thought; it is what people of the American Empire think. The idea of God placing favor on a nation simply because it is rich and powerful is not and has never been true. The sooner Americans realize that the Christian God does not favor America’s domestic or international agenda, the sooner we will be able to see ourselves and our relationship with humanity in their rightful global context.

2.) Jesus wasn’t an alien. The idea that Jesus was “sent” by God from outside the earth ignores some of the most profound theology of the incarnation. This logos, God’s world-making Word that Jesus was said to embody, was part of the world from the beginning (John 1:3-4). All of creation is a manifestation of this logos. Jesus being the “Word made flesh and liv(ing) among us” (John 1:14) was not the coming of an extra-terrestrial; it was an introduction of the world to its root cause and the reason for its being.

Christians characterize Jesus a being who never made mistakes, had everything carefully planned and worked out according to a pre-ordained script, outwitted all his enemies, perfectly balanced his emotions, had magical powers to heal and do acts of wonder, and died heroically on the cross completely confident in his ultimate triumph. To most Christians, he’s more of a superhero or a demigod.

If Jesus never really experienced vulnerability, futility, regret, frustration, remorse, shame, sickness, or need, if he had the magical ability to predict events and bend history to his will, then he wasn’t really human in any form we can recognize. He might as well have been from Krypton.

4.) Jesus didn’t have super powers. He had an ordinary power used superbly. That power was faith—a trust in God that was so complete that as the Gospel writers reflected on it, it seemed something more like kinship to God.

But here’s the thing—again and again, he made it clear that “ordinary” humans had this power. Most of the healings Jesus participates in in the synoptic Gospels are accompanied by the phrase, “Your faith has healed you” or “Let it be done according to your faith.” (He says this at least 10 times in Matthew, Mark, and Luke).  This suggests that the power rested in part with the individuals being healed and not just with Jesus.

In fact, Jesus said that with faith, regular people could walk on water (Matt. 14:23-26), heal the sick, drive out demons, even raise people from the dead (Matt. 10:7-8).  In other words, he instructed the disciples to do most of the miracles he himself was known for doing.

We can debate the historical truth of the Jesus miracles, but I think that would be missing the point. Whoever or whatever Jesus was or whatever he accomplished, he wanted to convey to us that with sufficient faith, we have the power to transform the world in ways similar to what he had done.

His salvation is not passive—like Superman and Lois Lane—but an active empowerment of his disciples to our full potential as beings created in the Image of God.

Which brings me to my final point.

5.)   Jesus’ “power” had nothing to do with being powerful in the conventional sense at all.

If you’re a fan of the Gospel according to Mel Gibson, you may believe that Jesus’ chief power was the ability to withstand pain that would have crushed an ordinary human. Gibson’s Super-Pain-Threshold Christ is in line with a longstanding project to bring Jesus up to the standards of American masculinity.

In the 1920’s advertising executive Bruce Barton complained in his bestselling book The Man Nobody Knows (Dunlap, 1925) that when he was a boy in Sunday School, Jesus failed to capture his imagination in the same way as Old Testament heroes like Samson, David, and Daniel. “They were winners—those three. …But Jesus! Jesus was the ‘lamb of God.’ [I] did not know what that meant, but it sounded like Mary’s little lamb. Something for girls—sissified” (ii-iv).

Barton’s complaint influenced Cecil B. DeMille in creating his Christ for the first blockbuster Jesus film, The King of Kings (1927). In his autobiography (Prentice-Hall, 1959) DeMille expressed the same desire for a more manly Christ:

“All my life I have wondered how many people have been turned away from Christianity by the effeminate, sanctimonious, machine-made Christs of second-rate so-called art. …This Man of Nazareth was a man, with body hard enough to stand 40 days of fasting and long journeys on foot and nights of sleepless prayer, a man with a mind sharp as a razor and balanced as a precision scale…There could well have been a note of admiration in the proud official voice of Pilate when he said of Him, ‘Behold the Man!’” (276).

This concept has changed little for the modern “butch Christ” crowd, especially Mark Driscoll, who was quoted in Relevant Magazine bemoaning churches’ “Richard Simmons, hippie, queer Christ,” a “neutered and limp-wristed popular Sky Fairy of pop culture that … would never talk about sin or send anyone to hell.”

I’d like to suggest that this is exactly what made Jesus remarkable–that he was weak. He came from people who were weak, who were under the foot of the Roman Empire. His hometown was such a backwater that when one of his disciples heard where Jesus was from, he exclaimed, “Can anything good come out of Nazareth?” (John 1: 46). All of the symbolism of Jesus’ life, from being born in a barn to “conquering” while riding a donkey, suggest not overwhelming strength but humility.

What Jesus possessed was what Gandhi later termed satyagraha, or “Soul Force”—the irresistible power of love applied in an active way to resist injustice. When Jesus stood up against the religious and political bureaucracy of his day–Pilate, the Sanhedrin, the Temple guard– they appeared to have all the power. But it was Jesus who was in charge. Not because he was Superman, but because he refused to answer force with force, injustice with injustice. In this way, when we emulate Christ in standing in love against the unjust powers of this world, we become powerful like him.

Superman is a fun fantasy figure, and the idea of a supernatural character who can fly, stop bullets, and save people from peril makes for good storytelling. But Jesus is something else entirely—a figure who’s power we can practice in our own way as a means not of defeating the evil of the world with superior force, but of transforming the evil of the world with superior love.