Two films playing at AFI Fest this week, from as diverse locations as Bulgaria and Brazil, take violence far more seriously than many of their counterparts and reveal both religion’s ability to heal us of it and religious leader’s use of violence to manipulate the faithful. 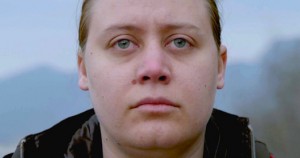 In Godless (Bulgaria, directed by Ralitza Petrova), Gana (Irena Ivanova) is a young woman who works as a home health nurse caring for the elderly. She abuses her position by stealing both their meds and ID cards. With her boyfriend, she nurses an addiction to morphine and sells the ID cards on the black market to corrupt local officials, who are, essentially, part of a mafia that runs their small town. Gana muddles through life until one of her patients slowly changes it. Yoan (Ivan Nalbantov) is the director of a small local choir. Gana drives him to rehearsal and stays around to listen to the music, the beauty of which seems to draw her closer to God and causes her to re-think her involvement with the corrupt men in her life. Empowered by this new-found spirituality, she stands up to those thugs, even though she knows it will lead to certain death.

There’s an ugliness to Godless both in the decrepit setting and the brokenness of the people that move through it. They are mired in memories of Communism and the corruption that it birthed, both past and present. Gana’s childhood is unimaginably tragic and is, no doubt, responsible for her ability to move through life with little or no compassion for those around her. She tells her mother, “I want to love, but I can’t.”

Far more effectively than many other films, Godless embodies the notion that “hurt people hurt people.” Having experienced profound betrayal at a young age, her fate seems to have been set. She participates in a system that she learned firsthand, the exploitation of the poor, the elderly, and women. But she is not beyond redemption, and when it comes, it does so not through conscious affirmation of some theological creed, but the alluring beauty of music. 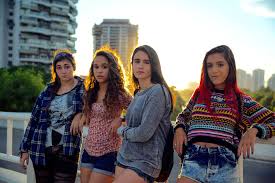 More explicitly violent and grotesque than Godless, death hangs as a specter over the proceedings in Kill Me, Please (Brazil, directed by Anita Rocha da Silveira and her first feature). Fifteen-year-old Bia (Valentina Herszage) and her friends live in the west zone of Rio de Janeiro. Like most teenagers, they are obsessed with boys, clothes, music, and sex. But a series of gruesome murders (the victims all young women) begins to cast a spell on Bia and her friends, who all react in different and increasingly shocking ways.

Kill Me, Please is a visually stunning film that revels in the vibrancy of youth. The bright colors and pop aesthetic juxtaposed to bloody, mutilated corpses and nightmarish dream sequences make for an unsettling experience. The strength of da Silveira’s writing and directing is her understanding of her teenage subjects (there are no adult characters to be found in the film) and her refusal to fall into the trappings of a standard thriller/whodunnit. The identity of the killer is never exposed, although viewers will have some suspects in mind. As a result, the film is far more about the effects of violence on observers and bystanders and reveals the very real ways in which it pollutes communities far beyond any initial act.

Another strength of Kill Me, Please is da Silveira’s use of religion, which makes a jarring appearance midway through the film in the form of a cheesy, contemporary Christian praise and worship gathering, lead by a woman who looks like she walked right out of a TBN dressing room. She sings about wanting that “dude from Nazareth” to “seduce her,” revealing the problematic sexualization of much of contemporary Christian music. Bia’s boyfriend, with whom she constantly wants to hook up, doesn’t share her desires. He takes her to the worship service to repent and for spiritual guidance. Here, the murders are put to “good” use as the minister uses them as examples to scare the hell out of her flock, while simultaneously using that faith to console and comfort the fearful. It’s amazing that these worldly kids fall for it.