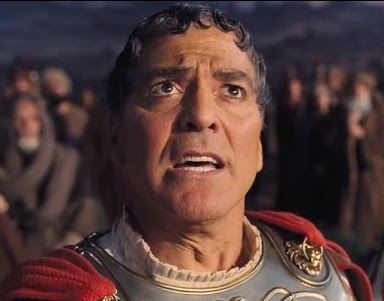 To watch a Coen Brothers movie is to take a meandering existential journey through red herring subplots, eccentric characters, and entertaining discursions into philosophy. (“Nihilists! …I mean, say what you want about the tenets of National Socialism, Dude, at least it’s an ethos.”) Whether or not it all makes sense in the end is largely a matter of interpretation. The only certainty is that human beings will be found fallible—sometimes tragically, sometimes hilariously—but always fallible.

Their latest, Hail, Caesar! takes place in a movie studio in the early 1950’s, offering a playground full of screwballs and man-made disasters. Capitol Pictures is fictional studio, but like MGM, Paramount, or Warner Brothers of the day, it churns out movies like a factory. Its stars are on permanent contract like the players on a baseball team, and all elements of their image, including their personal lives, must be carefully managed. The main character, Eddie Mannix (Josh Brolin) plays both ringleader to the circus and warden to the inmates. He’s a “fixer”; he keeps the movie machinery running whatever the cost.

The film shows us a day in the life of Eddie, in which he must stop a rising starlet (Natasha Bassett) from posing as a milkmaid for a sleazy photographer’s seductive “French postcards”; find a husband for an actress (Scarlett Johansson) who’s gotten knocked up out of wedlock; deal with a cowboy actor (Alden Ehrenreich) who’s been miscast in a drawing room melodrama, much to the chagrin of the director (Ralph Fiennes); and endure the pecking of two vulture-like gossip columnists (twin sisters, both played by Tilda Swinton). And this is before he finds out his biggest star (George Clooney) has been kidnapped from the set of a biblical epic.

As Mannix wanders from film set to film set putting out fires, we are treated to gorgeous recreations of the genre films of golden era Hollywood. The biblical film is actually called, Hail Caesar! A Tale of the Christ, borrowing its subtitle from Ben-Hur, and many of its scenes from other classics like Quo Vadis and The Robe. George Clooney plays Baird Whitlock, a lunkhead in a leather skirt, who eventually is supposed to see the truth of Christ’s message, like Richard Burton and Fredric March before him. The film even holds to the tradition of many Roman/Christian epics of the era by not showing the face of Christ. Although we do see him from behind—wearing a long blond wig—and we see his feet on the cross as craft services asks him before the day’s shooting if he’s supposed to get a hot lunch or a boxed lunch.

Scarlett Johansson plays DeeAnna Moran, a foul-mouthed, chain-smoking mermaid who stars in water ballets, a la Esther Williams. It’s her illegitimate pregnancy the studio has to account for in order to preserve the illusion of “innocence” the public has come to expect from her. In a twisted solution reminiscent of Loretta Young, Mannix hatches a plot to have Moran go on leave for a few months, give birth to her baby, give it to someone else, then publicly adopt the child for herself.

The breakout performance is by Alden Ehrenreich, playing the miscast cowboy, Hobie Doyle. Doyle is a whiz with horse riding and rope tricks, even plays a nice guitar and sings. But his deep drawl and folksy style make it impossible to for him to act convincingly in a room full of ball gowns and “cut glass” accents. Ralph Fiennes plays the director of the film, Laurence Lorenz, as a prissy perfectionist, along the lines of George Cukor or Vincent Minnelli. This leads to one of the deliciously farcical scenes of the film, in which Lorenz tries to extract the line “Would that it were so simple” (heavy emphasis on the “t’were”) from the cowpoke.

Other scenes include an appearance from everyone’s favorite boy toy Channing Tatum, as he leads a group of sailors in a dance number called “No Dames.” The bar where the number takes place is called the “Swinging Dinghy,” and the gay subtext only takes off from there. There’s a funny scene in which Mannix visits one of his film editors (Frances McDormand) slaving away in a darkened room, quite literally leading to a sight gag. The scene celebrates the many women editors (“cutters” they were called) like Margaret Booth and Anne Bauchens who never got the credit they deserved for making studio films come to life.

In the mean time we learn that Baird Whitlock has been kidnapped by a cadre of communist Hollywood writers. They take him to a remote house in Malibu and fill his head with communist teaching to the point that he’s ready to join the proletariat, as long as he gets his cut of the ransom money. The introduction of all the economic theory about dialectics and the head being cut off from the body politic gets you thinking about how neither communism nor capitalism really work out for everybody. By the end of the film, the writers are left behind by a more important “revolutionary” from the studio and are no better off than they began. Over at Capitol (get it?) Pictures, everyone has a role to play in the machinery of the movie business. There’s a lot of money to spread around, but there are still strict hierarchies as to who gets the boxed lunch and who gets the hot lunch. When Mannix finds Baird in his office the next morning idiotically spouting communist philosophy, his patience finally breaks. He slaps the star around and tells him to go finish the biblical picture because he’s an actor and that’s what actors do.

One other scene stands out, and it speaks to the Coens’ skepticism of the ability of any system to overcome human stupidity. Mannix has gathered leaders from four major religions—a Catholic priest, a Protestant minister, an Orthodox priest, and a rabbi—to read over the script to Hail, Caesar! A Tale of the Christ, to make sure they will find nothing offensive about the film. Cecil B. DeMille used to exploit clergy in just this way by inviting them to the sets of his biblical epics, pumping them for endorsements while they were still in the thrall of having met Charlton Heston or Hedy Lamarr. In this case, the clergy get into an argument over the nature of God and the meaning of the Trinity. Although the rabbi insists God doesn’t have a son, he’s a bachelor, and all the rest of these guys are “screwy.” The Orthodox priest thinks the chariot scene seems a little “fakey.” They can’t agree on theology, but they all agree they like Baird Whitlock playing the part of the Roman soldier.

In the midst of all the craziness, Mannix comes across as a painfully honest man, someone who really believes in the mission of the Capitol Pictures. He’s a devout Catholic who goes to confession, copping to the pettiest of crimes, like sneaking cigarettes when he told his wife he would quit, and, well, slapping a movie star. (Baird had it coming.) In the midst of all his work disasters, he feels bad for coming home late for dinner and worries about how his kid is doing in little league. At one point a headhunter from Lockheed tracks him down and offers him an executive position that would pay more money, have predictable hours, and fewer crazy people to work with. In a strange attempt to show Mannix how exciting his work will be, the recruiter shows him a picture of the then-secret hydrogen bomb test at Bikini Atoll. “Armageddon,” Mannix mutters. “And Lockheed was there!” the recruiter says excitedly.

So when it comes down to it, for all the philosophical meandering and goofball situations, maybe this is just a movie about a man considering a change in profession. Maybe what the Coens are saying is it doesn’t matter whether you churn out movies or bombs. Maybe what really matters is that you can get to your kid’s little league game or get home for dinner with your family.

…Would that it t’were so simple.