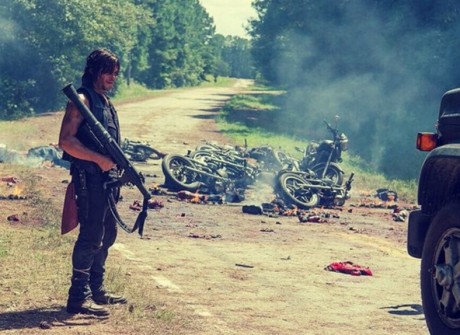 Last night’s episode of The Walking Dead was one of the series’ best…suspenseful, gritty, raw, meditative, and deeply spiritual. It might also mark a darker turn for what is already a bleak narrative.

As with so many previous episodes, last night’s episode of The Walking Dead teased us with parallels to the comic books with the arrival of Negan’s crew, but, for now, frustrated those expectations by taking us in another, although equally compelling, direction. The explosive prologue reminded us that the writers behind the adaptation of Robert Kirkman’s narrative can be as shocking as the master himself. But perhaps more than any issue of the comics, last night’s episode traded in some spiritual and religious themes that are impossible to ignore. 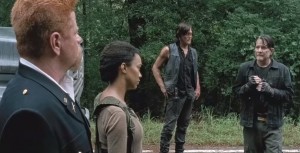 In one of the early scenes, Glenn and Enid rummage through an abandoned church for supplied to cross the wall. As Glenn frantically searches, Enid is lost in thought. He eventually encourages her to go on.

Enid: When I wanted to run, you said, “That’s how you lose people, even after they’re gone. What the hell does that mean?”

Glenn: People you love, they made you who you are. They’re still part of you. If you stop being you, that last bit of them that’s still around in who you are, it’s gone.

Enid: Who are those people to you?

Glenn: My parents, a man named Dale, Maggie’s father Hershel, a woman named Andrea, a man named Tyrese. Who are they to you?

Glenn essentially tells Enid that they [and we] must get through tough times, in part, to honor those that have gone before us, those that have loved us into existence and into being where we are now. This would have been a powerful exchange in any setting, but it took place in a church, which immediately put me in mind of the admonition in Hebrews 12:1, “Therefore, since we have so great a cloud of witnesses surrounding us, let us also lay aside every encumbrance and the sin which so easily entangles us, and let us run with endurance the race that is set before us.” 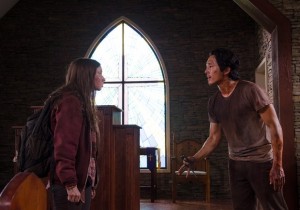 On top of that, as Enid is lost in thought, she stares at the sanctuary exit, over which is painted another verse, “Faith without works is dead,” one translation of James 2:26. This probably spurns her into action, but it also foreshadows events that take place later in the episode, particularly Father Gabriel Stokes’ (and the other Alexandrians’) decision to join Rick and the other’s zombie-killing rampage. Before he finally begins attacking the zombies, Father Stokes tells his flock, “God will save Alexandria because God has given us the courage to save it ourselves.” 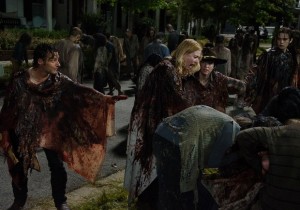 While the zombies have invaded Alexandria as a result of the Wolves’ attack, the residents behind the walls are in even greater danger thanks to one of their own. She’s put up a happy homemaker front, but Carol is a death-dealer and continues to be, even as she hides out in one of the homes. Her fairy tale threat to Sam (that monsters would rip him apart if he told on her for being in the armory) comes back to haunt both Sam and the rest of the Alexandrians. As Sam and the others make their way through the zombie infestation, Sam freezes, recalling Carol’s threats. As he panics, the zombies turn on him and break up the group. With so many religious themes already established in this episode, I couldn’t help but think about the way this scene parallels the ways we talk about religion and theology with kids. Are we trading in threats and fear-mongering or are we teaching them in ways that empower and encourage them to move through a dangerous world that is in need of help?

And speaking of dangerous worlds, as Rick waits at Carl’s bedside at the end of the episode, he tells his son that he wants him to survive in order to see the world that he will create. Rick has been moved by everyone pitching in to rid the community of the zombie horde and believes that this same cooperation can rebuild and expand Alexandria. Rick’s optimism, however, might be short-sighted, because it will still be a violent world, and perhaps even more bleak than before. Unlike previous crises, the entire community has finally bought into violence, and it has consumed them. The stunning sequence in which all of their attacking bodies quickly meld into one another and then fade to black seems to signify that, ultimately, there will be no turning back.