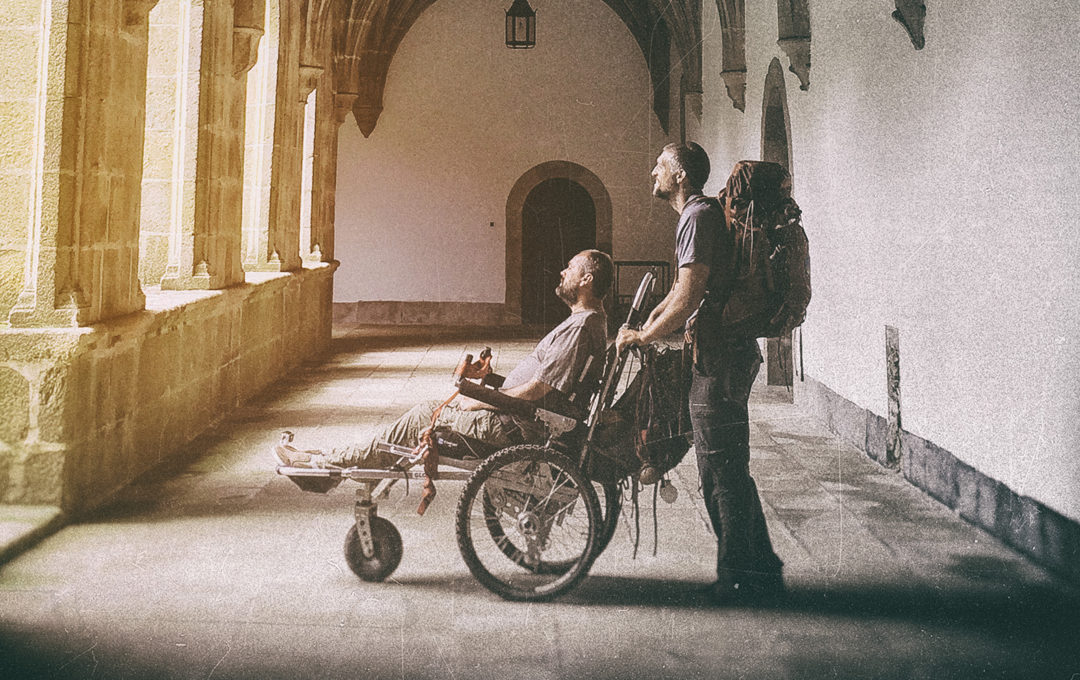 When it starts to feel like we live in the…most…divisive…times…ever, I return to Steven Pinker’s book,The Better Angels of Our Nature, in which he shows that we are, in fact, enjoying the safest times in human history. I’m also mindful of the trip my wife and I took “around the world” in 2012 and how we experienced hospitality from and fast friendships with strangers that bring us joy even now. In times like these, we need more reminders that the world is—or at least can be!—a good place. While it’s so much more that, I’ll Push You, a new film about “500 miles, two best friends, and one wheelchair,” is one of those reminders.

Directed by Terry Parish and Chris Karcher, I’ll Push You traces the remarkable journey of best friends Patrick Gray and Justin Skeesuck across the 500 mile Camino de Santiago. Walking the entirety of this journey is a noteworthy feat in itself, pushing a friend in a wheelchair, who has no use of his arms and legs, borders on the miraculous. The film chronicles their journey, but places it in the larger context of their lifelong friendship and, more specifically, Patrick’s desire to be with and care for Justin (alongside his family) for the rest of their lives. As such, the film is more spiritual experience than travelogue, which is also a fitting tribute to the Camino itself. Beyond the physical demands and logistical challenges of pushing a friend in a wheelchair over 500 miles of rocky, hilly, muddy terrain, Patrick must face up to his own emotional and spiritual limitations and need for support and transformation. As Justin is pushed across the Camino, he too wrestles with spiritual conflicts that will resonate with many viewers, whether or not they live much of their lives in a wheelchair. The story is told so effectively that we can’t help but locate ourselves in both pilgrims, one in need of a push and the other that never wants to stop pushing.

I first saw a cut of I’ll Push You back in January and was immediately struck by four themes: friendship, sacrifice, vulnerability, and hospitality. These are so tightly woven together that the removal of one thread threatens to undo the fabric of our relationships. How can we be a friend without sacrificing for, being hospitable towards, and vulnerable before “the other?” Aren’t sacrifices, at heart, a desire to connect with another person? Isn’t hospitality simply friendship, sacrifice, and vulnerability in practice? Perhaps when we struggle most with being a good friend, being selfless, or lacking in hospitality it’s because we are afraid of being vulnerable.

And this is the heart of I’ll Push You‘s message, the importance of vulnerability. Our me-first, hyper-capitalist, fear-based news and pop culture media leave no room for vulnerability or risk. We must ramp up defense spending, buy the right gadgets or clothes, or protect our second amendment rights because we are terrified of being vulnerable. In one of my many conversations about the film with director Terry Parish, he wondered if this is not part of why the United States is plagued by so many mass shooters, one characteristic of which is that they tend to be single, white men. 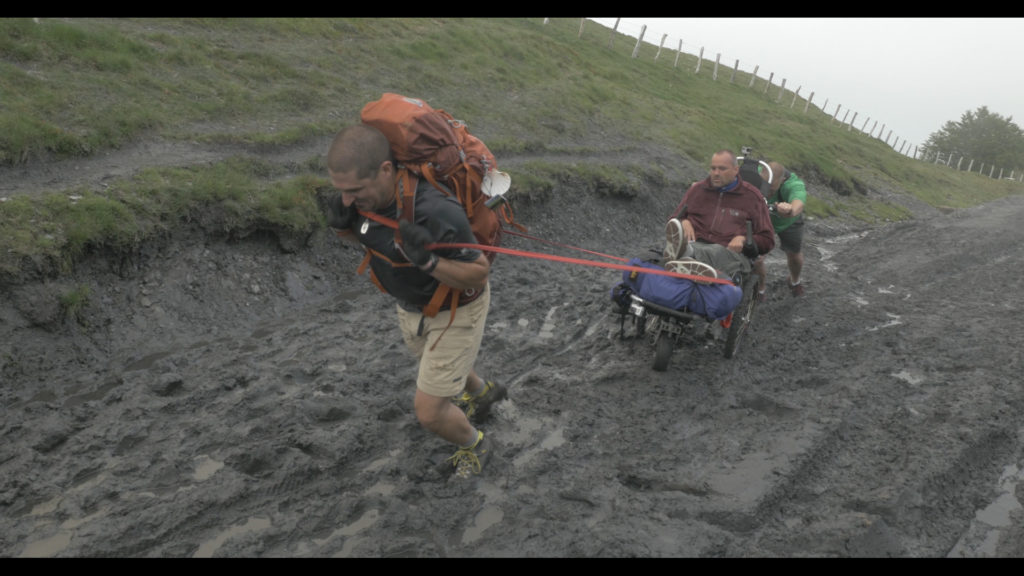 Which brings us to another strength of I’ll Push You, its portrayal of male friendship. Rarely do we see male intimacy on screen that isn’t either ridiculed or an example of homosexuality or homoeroticism. While this type of friendship finds no quarter in hyper masculine American politics and American evangelical Christianity, you can be damn sure it is the embodiment of everything that Jesus talked about regarding friendship, especially the oft-quoted (and perhaps hyperbolized) “greater love” passage (John 15:13). For more on this, listen to my conversation with Tripp Fuller on the Homebrewed Christianity podcast. In I’ll Push You, we see that laying down one’s life for a friend doesn’t just have to mean paying the ultimate sacrifice.

Politicians and news outlets make careers and great wealth by keeping us afraid. To debate or doubt that is to live in some alternate universe. I’ll Push You reminds us that hospitality, friendship, and opportunity for connection lie around every corner, if we are willing to embrace vulnerability and sacrifice our desires for safety or our obsessions with worldly possessions to encounter it. To deny that is to have ultimately fallen victim to fear-based propaganda and to have forgotten the truth that perfect love casts out all fear.

I’ll Push You releases in over 570 theaters nationwide on Thursday night, November 2nd, at 7:30 p.m. (all times local) as part of a special one-night-only event.  For theater information and tickets, visit: https://www.fathomevents.com/events/ill-push-you