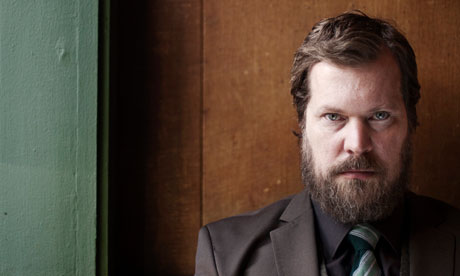 John Grant has been gracing the covers of international magazines aimed at upscale gay men during the last several months. Long a player on the alternative music scene as a member of The Czars, he has been in the midst of a personal and musical revival for the last six years. Now, at age 48, it seems like we’re really getting to know him for the first time.

Grant is nothing if not a lumbersexual—in the gay world, a bear. The video for his spring indie hit, the surprisingly groovy “Disappointing,” takes place in a bathhouse in London full of beefy, hirsute men in all stages of undress. Like all bear culture, it celebrates gay men who don’t meet the gym-toned stereotype.

Grant celebrates all things ursine in his video for “Disappointing”

Grant’s story is unfortunately typical of gay men in America. He has experienced social alienation and personal self-loathing about his sexuality, made worse by his religious upbringing. (In interviews, he mentions having been raised Methodist, and being a Baptist during his adult life.) Low self-esteem led him into cycles of depression and negative compensating behaviors of promiscuity and drug use.

If you’re lucky you might skip this phase of coming out. Or you might “crash out” of the closet briefly, but avoid long-term consequences. If you’re unlucky like Grant and so many other gay men, this phase may leave you with a lifetime of fighting addiction and HIV.

Grant deals with the negatives of internalized homophobia in terms many gay men can understand. But his music and lyrics are relevant to anyone open to understanding how suffering can lead to insight and spiritual rebirth.

His latest album, “Grey Tickles, Black Pressure,” bookends an intro and outro based on I Corinthians 13, the Apostle Paul’s hymn to love, done in spoken word, in various accents and languages. This seems to be posited as an ideal of love. The glib depression and cynicism that follows in the album seems to reflect the reality and difficulty of loving—whether oneself or someone else.

As someone who, like Grant, searches for spiritual experience, but often finds anxiety getting in the way, I can identify with the title song:

The track “GMF” is a winking look at the kind of lying self-promotion and delusion we often have to go through when trying to land a man/woman/person/significant other.

“I am the greatest mother-fucker
That you’re ever gonna meet.
From the top of my head,
To the tips of the toes on my feet.”

In the end, he can only promise he’ll make the other person happier “sixty-five percent more of the time.”

“Down Here,” spells itself out less ironic terms: “What we got down here is oceans of longing.” Although this would seem to be a song about unrequited love, check out the video, in which an adolescent boy desperately wants to become a synchronized swimmer. It must also be noted this song has probably the baddest bass clarinet solo in the history of rock.

Grant is a creative wordsmith, finding ways to twist words into unlikely rhymes, as in “Chicken Bones,” from his 2010 album, “Queen of Denmark”

“When I got out of my bed this morning
I noticed that it didn’t have a right side
And my head feels like it’s filled to the top
With Pop Rocks and cyanide.”

He loves pop culture references. One of my favorites is “Sigourney Weaver,” on the same album, in which he complains:

“I feel just like Sigourney Weaver
When she had to fight those aliens.”

“I feel just like Winona Ryder
In that movie about vampires.”

(Referencing Bram Stoker’s Dracula, that film in which “she couldn’t get that accent right.”)

And if you’re a gay man of a certain age you must surely identify with the line in “Global Warming:”

“How am I supposed to live in a world
With no Madeline Kahn?
My favorite girl is gone.”

Sometimes his references just take the form of long catalogues of likes and dislikes, as in “Disappointing.” It’s a “My Favorite Things” list song, with the kind of “doorbells and sleigh bells and schnitzel with noodles” rhymes that bring together the mundane and the glorious:

Grant is a talented keyboardist and sings in a plaintive baritone. He freely mixes acoustic piano and guitar with electronics. Much of his first album, “Queen of Denmark” (still only available on CD), favors lush arrangements that bring to mind bleary 70s pop. His second album, “Pale Green Ghosts,” mixes the electronic/acoustic aesthetic with more brass and percussion. The latest, “Grey Tickles, Black Pressure,” sometimes has a strong techno edge, which brings out the strength of his lyric writing, but sacrifices some of his talent for melody.

Grant is at his best when his compositional abilities combine with his deep-plumbing lyrics. So far, his songwriting masterpiece is “Glacier,” from “Pale Green Ghosts.”

This song uses a naturalistic metaphor to describe pain that can lead to spiritual growth. Although the verses of the song address the very specific experience of religious condemnation of queer people and the threat of theocracy, the chorus could apply to anyone:

“This pain is like a glacier running through you,
Carving out deep valleys
And creating spectacular landscapes,
Nourishing the ground
With precious minerals.”

It’s a beautiful expression of what some mystics have called the via negativa – the way of embracing darkness. The idea is that pain, loss, sadness are feelings that can be embraced and lived into, but always with the intention of replenishing the spirit and leading to new creativity and new life. This descent into darkness and ascent into the light is at the heart of the Christian story of death and resurrection.

As if to demonstrate his ultimate triumph, the song ends with an extended instrumental section. Grant shows off his virtuosity on piano, with crashing chords and rivulets of scales that seem to embody the showering, dripping wet forces of nature invoked in the song. The effect is even stronger in a live recording he made with the BBC Orchestra.

I don’t mean to make Grant sound gloomy, because he’s not that way at all. He mixes humor and struggle, the carnal and the spiritual, shallowness and depth—often within the same song. You have to listen to each song a few times to get the whole package. His music holds up to, and rewards, repeat listening.

“Down Here” lends an unexpected take on the idea of unrequited desire.