Christian Piatt’s new book, Leaving A-Holiness Behind: From Pious Jerk to Not-So-Pious Jerk, works well, in part, because he admits what so few people faith are eager to admit. Namely, that he–and the rest of us–are a bunch of assholes. If that statement offends you, well, you definitely need to read the book.

We’re Christians because we’re assholes. And being a Christian doesn’t help. In fact, it often ends up being worse when we become a complicit part of a system that tells us we’re better people for being involved, and yet the evidence doesn’t support it. So we’re still assholes; now we’re just hypocritical, deluded ones. (158) 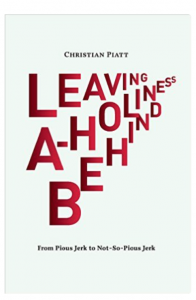 But before he does, Piatt draws from his own experiences of being and suffering at the hands of Christian assholes. Throughout the book, he looks at the ways in which most Christians–present company included–have misused and abused the faith, largely, for our own selfish ends. In doing so, he examines Christian cliches (“God has a plan,” “They’re in a better place,” and the list, unfortunately, goes on and on), CCM (that’s Contemporary Christian Music for all you uninitiated out there), our asshole ancestors, proof texting (picking and choosing the parts of the Bible that support our opinions while ignoring others that put us in our place), the doctrine of hell (more on this in a moment), why some people participate in Christianity in the first place (hint, it’s often “for the kids”), and the importance of better understanding our history, beliefs, and theologies.

And this last part is what’s really encouraging about Piatt’s work. Unlike many frustrated believers that have walked away from the faith, Piatt refuses to do so. This book is evidence of his willingness to engage in the difficult conversations in order to sort out what is vital in our traditions and teachings and what his harmful, all in an effort to make our communities–and our world–a better place. I was particularly intrigued (and entertained by) his reflections on hell, a “place” about which I have radically changed my beliefs in the past decade. This chapter reflects his willingness to engage particular theologies and beliefs with which he might radically disagree in ways that lead to fruitful conversation and meaningful action. Of course, he’s still going to get a punch or two in:

But considering the use of the doctrine of hell in the Christian faith, particularly in the past few centuries, suffice it to say that the fear, judgment, emotional scarring, family estrangement, physical violence and any number of holy wars that have been conducted in the supposed name of saving souls from such a place, we’ve created our own hell on earth. (136)

As someone that consistently feels like I’m on the verge of walking away from it all, Piatt’s book is a funny and thoughtful encouragement not to. In the troubled times in which we find ourselves, with violent religious extremism plaguing humanity from all faiths, Piatt’s insistence that we’re Christians because we’re assholes is an important reminder. We are no better than anyone else.

Plus, the book is full of puzzles and games to keep the conversation going. You won’t find Leaving A-Holiness Behind in your local Wal-Mart (shame), so order it online here.