I’ve been reading loads of comics lately. Recently, I came across Ramzi Fawaz’ new book, The New Mutants: Superheroes and the Radical Imagination of American Comics, which sounded like a good academic companion. I was right. The New Mutants is not only one of the smartest critiques of comics I’ve ever read, it’s one of the most brilliant academic engagements with pop culture, period. 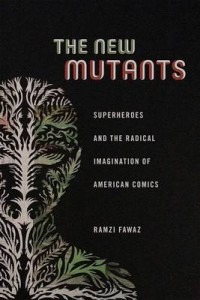 Fawaz examines post-War superhero comics to show how “the American superhero, once an embodiment of nationalism and patriotic duty, became a popular fantasy of internationalism and the concept of universal citizenship in the second half of the twentieth century” (3). What’s interesting (frustrating?) about Fawaz’ research in the 1960s, 70s, 80s, and 90s is how much these questions, conflicts, and concerns still linger today. Fawaz pays particular attention to several famous franchises, The Justice League of America, The Fantastic Four, The Silver Surfer, The X-Men, The New Mutants, and Spider Man. Each chapter is an insightful articulation of the ways in which these narratives and characters were products of and alternative responses to the prevailing cultural, political, economic, and religious climates from which they emerged. But they are more than that. He writes, “Taking a dual-pronged approach, I conceive of comics as historically constituted objects emerging from distinct social and material conditions—including shifting economic demands, the biographies of different creators, demographic transformations in readership, and new printing technologies—while also seeing their rich narrative and visual content as producing imaginative logics that offer ways of recognizing, assessing, and responding to the world that are not reducible to any single historical factor” (23). Fawaz doesn’t just critique their narratives but pays close attention to the artwork that brings them to life. The book itself benefits from full color plates and black-and-white reproductions of key panels/pages. Fawaz also turns his attention to the fan letters pages that wrapped up most individual issues to show the conversations between the artists and readers that even shaped the series’ progression.
Fawaz’ book is definitely for the most hardcore comics fan as well as academics interested in a deeper analysis of pop culture. It’s heavy, but rewarding reading with rich insight on nearly every page. Fawaz exhibits a passion for and love for the art form that few texts of this nature share. Read on for an brief overview of the book. The New Mutants (New York University Press, 316 pgs.) is available on Amazon.
After his introduction, Fawaz explores The Justice League and the tension between nationalism and universal citizenship that was one of its central themes. Fawaz writes: “Against a traditional understanding of national citizenship as a legal relationship to the state, The Justice League posited ‘ethical citizenship’ as a form of belonging based on an individual’s performance of good deeds that promote global peace and solidarity while ‘making the world a better place to live’” (41).
In his second chapter, Fawaz takes a closer look at the “queer history” of The Fantastic Four and the ways in which this mutant family modeled difference. Fawaz writes:

Each of the four characters initially appeared as ideal social ‘types’ whose physical comportment reflected the common categories of identification associated with the 1950s nuclear family in the decade’s popular culture […]. Though initially depicted as monolithic types, the physical transformations the four undergo ultimately reveal the tenuousness of these roles and the social anxieties attending their performance. As each character’s super heroic identity took shape, they grew to embody a host of 1960s counter cultural figures […] all nonconformist figures that flatly contradicted the teammates’ original self-presentation as patriotic, traditionally gendered, family-oriented anti communists. (70)

From here, Fawaz devotes his third chapter to the “counter public as world-making project” and undertakes a detailed study of fans’ responses to their favorite comic book narratives and characters through their letters to the creators and those creators responses to them in the fan pages. These were especially influential in the development of The Fantastic Four and evidence much of his claims about the “queerness” of the Fantastic Four in his previous chapter.
In the following two chapters, Fawaz discusses the emergence of the space opera and their messianic superheroes through series like The X-Men and The Silver Surfer and the more “earthy” urban folktales and superheroes that “gave a damn” like Green Lantern, Green Arrow, and Luke Cage, for example. These latter narratives often took place against grittier, urban settings and “demanded superheroes acknowledge the material and lived conditions of the people they claimed to fight for as a requirement of their heroic activity […while deploying] a documentary visual style and an ethnographic focus on the everyday lives of ordinary people to recuperate experiences and stories previously barred from representation in mass-market superhero comics, including those of racial minorities, the urban poor, and drug addicts” (169).
In the following chapter, Fawaz analyzes demonic possession narratives like “The Dark Phoenix Saga” in The X-Men and the introduction of Venom into the Spider Man series, both of which, he argues, were reactions to the increasing influence of global capitalism and rampant consumerism. What is especially interesting here is his reflection on the ways in which these responses are gendered in these superhero narratives.
Next, Fawaz turns his attention to The New Mutants series, which, he argues, “offered a novel conception of the superhero not as crime fighter or icon of identity politics but as a vehicle for forging political alliances across multiple axes of difference and diverse spiritual and ethical world views, […] a powerful collection of figures, tropes, and genres of deviant and queer fantasy that proliferated in the pages of American comic books” (35). He also shows how this was a narrative shot through with themes of (im)migration and generational conflict as much as it was the difference between mutants and humans.
Fawaz concludes his book with an epilogue on the “marvelous corpse,” which entails the deaths of superheroes (like Superman and Captain America, for example) and the rise of crisis events (think the recent “Civil War” saga from Marvel). Fawaz argues that the former are “intimately related to public perceptions of citizenship as a bankrupt category of political life and the failure of postwar human rights discourse to prevent mass suffering and global violence” (271). The latter, while continuing to address political issues like the loss of civil liberties, are, of course, great ways to sell more issues.