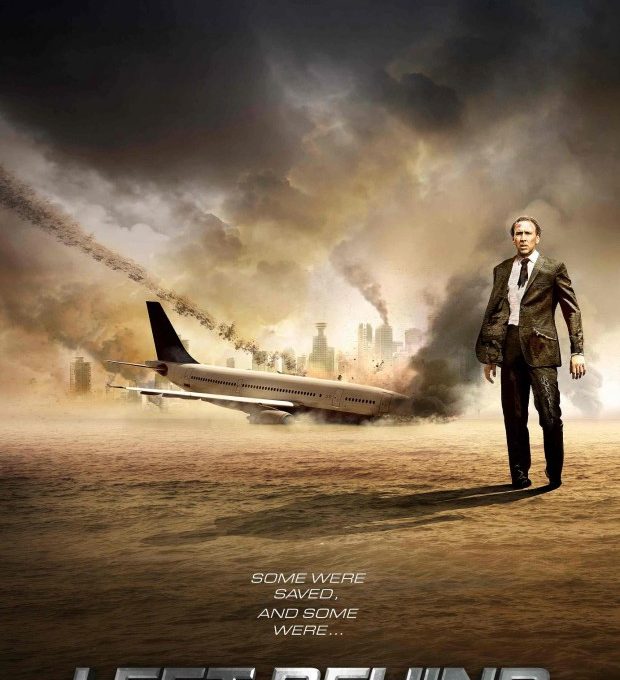 Left Behind is an awful movie. I expected it to be awful on the theological level; I was hoping it wouldn’t be awful on an entertainment level. Unfortunately it is both.

First, the film. If you have lived on the East or West Coast for the last 20 years, or are Roman Catholic, you may not know how the Left Behind story goes. But unfortunately for the rest of us, many of the details have trickled down even if we have assiduously avoided this evangelical book/movie/then-another-movie juggernaut.

A pilot named Rayford Steele (Nicolas Cage) is headed to the airport for a flight to London. He is met at the airport by his daughter Chloe Steele (Cassi Thompson) who has come home from college to surprise him on his birthday. She finds him flirting with a hot flight attendant who is not her mother/his wife. Surprise!

Chloe steers her dad away from his potential infidelity long enough for them to talk about how weird Mom (Lea Thompson) has been acting since she joined an evangelical church. Rayford’s exact words: “Well, if she had to fall for another man, it might as well have been Jesus Christ.” And, well, of course Mom’s been bugging them to get saved, because The Rapture ™ will be happening any day now.

What happens next should surprise no one. Suddenly, all of the children on the flight, Chloe’s kid brother and mom on the ground, and several other select adults, disappear, leaving their clothes and possessions behind. Everyone on board the plane, and everyone on the ground with Chloe, are in a panic. They are Left Behind ®, since The Rapture ™ has happened.

I say this development should surprise no one. Apparently it does surprise everyone in the film, because they spend the next hour wandering around going, “What happened?” “Did aliens take them?” “Was this a weapon designed by terrorists?” “What if all the people are just invisible instead of gone?” All of these theories are given endless amounts of time to play out when everyone in the audience already knows what happened.

Much of the screen time is taken up with phone calls. Remington Steele, sorry, Rayford Steele, attempts to call his wife on his cell phone from the plane he is flying. Chloe Steele attempts to reach her mom and her brother on an answering machine at home. Tense minutes are spent staring at the phone ringing in the empty Steele house and the blank screens on the daughter and father’s cell phones.

Chloe Steele makes her way back to her house (after her car is destroyed by a small crashing plane). On the way she passes dozens of extras mourning their disappeared children. (This film has a cast of dozens.) She makes it home and what should happen? The phone rings! The tension mounts. She picks up the phone. It’s a computer voice telling her an alarm has been detected from her car. Did we need five minutes of cinematic tension for this kind of anti-climax?

After a while, a few of the characters begin putting the pieces together and start to figure out that all of the adults who are gone had an annoying habit of telling their friends about Christ and the upcoming Rapture.™ Once these pieces are put together, Ray-Ban Steele, sorry Rayford Steele understands he must land the plane safely so all these people can begin making amends and turning their lives over to Jesus.

At this point, contact is finally established between Chloe and Buck Turgidson, sorry, Buck Williams –via cellphone, of course – who is now acting as Ray Steele’s navigator. Chloe tries to guide the plane onto a clear strip of new highway since all the airports are closed. At this point, the film turns into Airport 1975, but sadly, without Karen Black.

The one saving grace of this film was supposed to be Nic Cage. But despite looking like a rubber mask of Nic Cage with horribly dyed hair, Cage can do nothing to save the movie. He tries a couple of times to get “In the Cage,” (“Either the whole world’s gone crazy or I’m going insane!”) but somehow he just can’t muster it. He literally and figuratively phones in his performance.

Now the problem with the theology. I could have written this part without seeing the movie. The Rapture ™ is as selfish and myopic as “Christian” theology gets. I understand there are some people—particularly poorer Christians like the ones in my home state of Kentucky—that may find strength in the idea that Jesus may suddenly appear and sweep them away from their difficult lives. But the kind of Rapture ™ that has been peddled by authors Jenkins and LaHaye, and film producers the LaLonde brothers, is a far cry from “One bright morning, when this life is over, I’ll fly away.” This is a petty, vengeful idea of Christ’s return–a suburban megachurch eschatology where the political enemies of Red State America—gays, secular scientists, abortion providers and patients, unmarried and living together heterosexuals, Democrats, Muslims—finally get theirs.

The only thing the movie does well is demonstrate how wickedly cruel any God would be that would unleash such an event on humankind. Take everybody’s children away from them, including billions of people who have never even heard of The Rapture ™? Don’t worry, child kidnapping is just God’s way of giving everyone a second chance before unleashing His righteous fury. Happen to be flying in a plane or riding in a car when your Christian pilot/driver disappears? Sucks to be you! You should have believed in Jesus Christ, because evangelical Christianity is the winning religion in the great cosmic lottery of religious affiliation.

But while we’re talking winners and losers, let’s talk about how the LaHayes and LaLondes of the world are doing. In the time since the first Left Behind book appeared in 1995, the country has become increasingly liberal as a whole. The Religious Right is on the ropes as a political power. Same-sex marriage has reached majority acceptance and will soon be legal across the country. The younger generation increasingly identifies as non-religious or “spiritual but not religious.”

The nice thing about Rapture ™ theology is it can work both ways. When your Christian fantasy books are topping the New York Times best-seller list and your religio-political followers are swinging elections, you can claim your conception of God is “winning” and the loser liberals are on the wrong side of history.

But when the tide turns in the culture wars, you can always claim the decreasing book sales, the dwindling box office, the increasing secularization of America is proof that we are living in a fallen and degenerate age.

Demographically and culturally, it’s pretty clear this is a different America than when these books came out. If not for the cling-to-anything terror brought about by 9-11, perhaps these books and this movie would never have crossed into the mainstream. It seems that when viewing the way history continues to unfold, intolerant white evangelical Christians and Rapture ™ theology are, thankfully, being Left Behind ® .