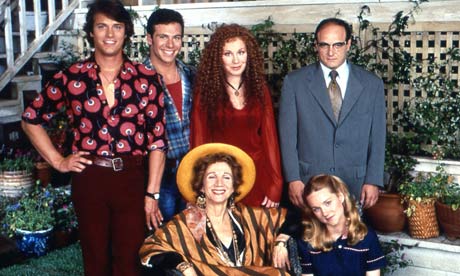 Perhaps it’s fitting for a television show located in San Francisco that such a fault line should have formed through the HBO series Looking. As the first extended gay male drama on a mainstream channel since the early aughts’ Queer as Folk, the show was bound to be a lightning rod. But where QAF was controversial for its mere existence, not to mention its graphic portrayal of gay sex, Looking is creating a different kind of controversy. Perhaps, wonder viewers, the gay lives in the show are too conventional—perhaps even boring.

More specifically, “This show is bereft of levity and crawls at a snail’s pace with claustrophobic camerawork that feels like a Dateline re-enactment shot by Ingmar Bergman,” according to Mick Stingley of Esquire.

The characters are sort of a Three Ages of (Gay) Man. Patrick (Jonathan Groff) is a 20-something naïf and video game designer who can’t decide whether he wants to be serious or wants to hook up, Augustín is a 30-something artist who’s in a relationship but still wants to play around, and Dom is a 40-something waiter who is ancient in gay years and had better find someone soon. (As Dom laments, “On your 40th birthday, Grindr e-mails you a death certificate.”)

I actually find their adventures, or whatever you want to call them, interesting in a slice-of-life, gays-in-the-age-of-equality kind of way. Critics like The Daily Beast’s Tim Teeman, who calls Looking’s understated performances “homo mumblecore,” have complained that the characters are self-absorbed and prematurely post-political:

“There is no notion of San Francisco’s tumultuous and venerable gay history. The men just use its bars and cruise its streets; sexuality, the show makes clear, is now just part of the service industry.”

I hate to say this, but I’ve dated in New York and San Francisco, and this blithe non-awareness amongst the gay male set is pretty typical. It’s difficult to date in the big gay cities because there are so many options. Dating apps like Grindr or other Web sites begin to seem like an endless menu, with users wondering what’s for dessert before they’ve even decided on a main course. For better or for worse, Looking’s shallow and privileged gay male characters seem accurate.

The show isn’t bereft of some old-fashioned gay charm; even post-political gays still have wit.

Observing a gay bachelor party that involves both grooms cavorting with a scantily-clad dancer, Dom shakes his head and remarks, “The Lord told us a bachelor party was supposed to be between one man and one stripper.”

Patrick’s perusing through a gay dating site brings up a now-perennial question: “Is this guy really attractive? I can’t tell. Instagram filters have ruined everything.”

Another comment from Patrick after meeting one of Augustín’s friends at the Folsom Street Fair: “He did have something, that guy. But maybe it was just the jockstrap.”

But if Looking is just a little too post-identity-politics for some viewers, a good series to watch for contrast is Armisted Maupin’s Tales of the City, now available on Hulu.

A genuine part of San Francisco’s “tumultuous and venerable gay history,” Tales started out as a newspaper serial in the San Francisco Chronicle in the mid-1970’s. With the initial episodes collected into three books, it introduced readers to an unforgettable set of characters in post-hippy San Francisco, when the City was in its first flush of gay liberation. (Maupin eventually wrote a total of nine books, the last of which, The Days of Anna Madrigal, was just released this January.)

The first Tales book was made into a controversial and critically acclaimed mini-series on PBS in 1993 that was among the first on American television to show two men in bed and to have well-drawn and non-tragic transgender character. If you’ve ever wondered how PBS went from a universally beloved network of children’s shows and British dramas to the bête noire of the Republican Right, Tales of the City had a lot to do with it. The controversy was so great that the subsequent two books weren’t made until 1998 and 2001, and were produced by Showtime and Channel Four, rather than Public Television.

Some characters in Tales are types that would be familiar to viewers of Looking—Patrick seems to be the direct gay offspring of Michael “Mouse” Tolliver (played by Marcus D’Amico initially, Paul Hopkins in the subsequent series). Like Patrick, Mouse is romantic and clueless, desiring happiness but unable to grab it when it’s right in front of him.

Mouse has a certain innocence, but isn’t nearly so fresh-off-the-farm as Mary Ann Singleton (Laura Linney) a girl who up and decides to move to San Francisco from Cleveland. As both Tales and Looking point out, the question of “Where are you from?” takes on peculiar meaning in San Francisco, as no one seems to actually be from the city.

The first installment of Tales follows Mary Ann as she leaves her Midwestern roots behind and moves into a boarding house on Russian Hill presided over by Anna Madrigal (played to acclaim by Olympia Dukakis). Mrs. Madrigal is a mysterious and perceptive mother hen to her brood of boarding house bohemians, doling out advice and homegrown joints in equal measure.

Mary Ann is quickly plunged into a world of disco clubs, casual sex, and recreational drugs, and she has to wise up quick. In one scene, someone asks her if she wants some coke, and she says, “No thanks, I’m on a diet. Do you have some Fresca?” At another point, she finds herself having to explain her new friend Mouse during a phone call to her mother in Cleveland, “Mom, he’s a homosexual. You know what those are, they have them on television now.”

Other denizens of Mrs. Madrigal’s 28 Barbary Lane include Mona Ramsey, a bisexual California flake who flits from one source of meaning to the next, and Brian Hawkins, a womanizer with a heart of gold.

The PBS mini-series is stocked with breakout performances from actors that would go on to 90’s fame, including Linney, Parker Posey, Janeane Garofalo, and Thomas Gibson (Dharma and Greg), and liberally spiced with cameos like Ian McKellan, Rod Steiger, Father Guido Sarducci, and County Joe McDonald.

The plots of the first three books/mini-series are absurd, culminating in almost Nancy Drew-style mysteries, with Mary Ann breaking up a child pornography ring, discovering an Episcopal cannibalism cult, and saving DeDe Halcyon and her children from the second coming of Jim Jones. The characters continually cross paths despite inhabiting different scenes and social strata, like San Francisco is the biggest small town in the world. The revelations of the plot are not nearly as interesting as the characters themselves—each with secrets to be plumbed and their own needs for liberation and new life.

And of course, the biggest Character of them all is the City itself. A place of drag nuns, jockey shorts contests, disco roller rinks, and pot-smoking transgender landladies.

Perhaps that’s what the draws Looking and Tales together—the search for life and liberation in a city that is perpetually and colorfully remaking itself. Tales celebrates San Francisco as a pre-AIDS sanctuary for nonconformists; the Great Gray City of Love becoming the Great City of Gay Love. Looking celebrates the City after apocalyptic crises of AIDS and the social and racial upheavals of the 60’s and 70’s; a world-leading city of innovation and tolerance. It’s still a place to find a purpose, to find an alternative family, to find a self.