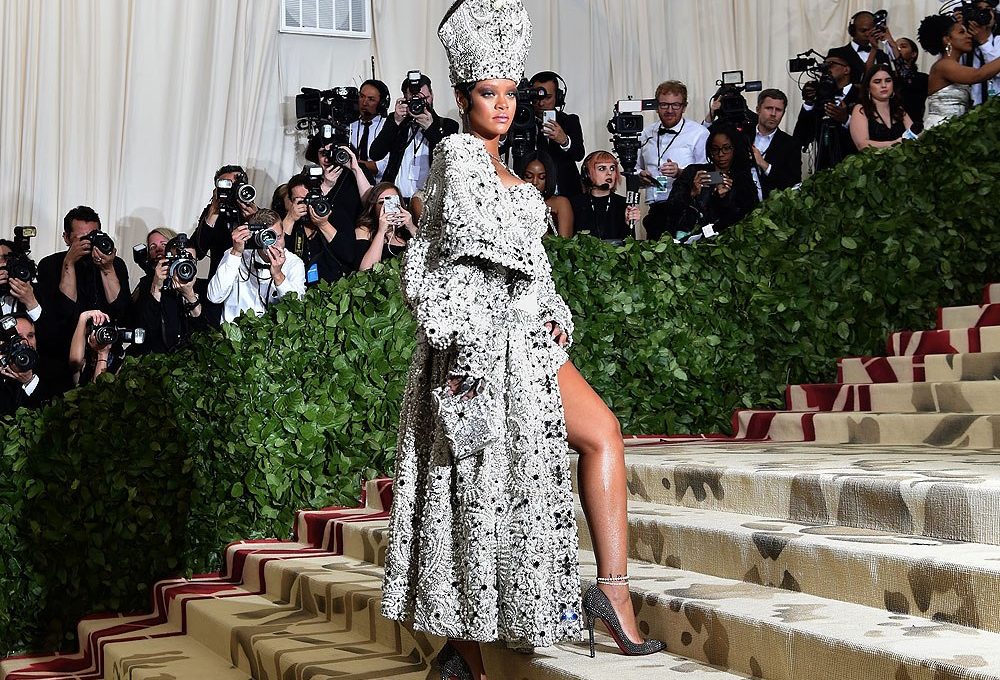 Tongues wagged and Twitter lit up last week as the annual Met Gala in New York City had celebrities dressing in Catholic couture. The fundraiser for the Metropolitan Museum of Art’s Costume Institute always brings out wildly creative fashions, but this was an event apart, with Catholic references from the Virgin Mary to Joan of Arc.

One of the most memorable looks—one likely to be copied by drag queens with big budgets—was Rihanna’s stunning beaded and bejeweled pope outfit, matching a sparkling mitre with a skirt cut so short it nearly revealed the Holy of Holies.

Janelle Monae, fresh of the release of her groundbreaking album/film Dirty Computer, wore a hat with a halo effect over a sparkling chain-mail hood that gave her the look of the beatified crusader she truly is.

Jared Leto finally embraced his resemblance to a blue-eyed Victorian Jesus, with a gold leaf crown to go with his flowing locks and full beard. Although the blue velvet suit with wide lapels suggested a 1970s prom.

A personal favorite was Lena Waithe, queer actress and co-star of Master of None, who wore a black suit and was draped in a dramatic rainbow cape. Some people didn’t see the “Catholic” in it, but add a tricorn hat and she could have been a member of the queer Knights of Columbus.

Some predictably denounced the event as blasphemous, but even the Catholic hierarchy seemed to be in on the fun. Cardinal Timothy Dolan was there for the opening of the corresponding exhibit, “Heavenly Bodies: Fashion and the Catholic Imagination,” which includes 42 rare pieces of liturgical clothing and jewelry from the Vatican. The Cardinal joked that he had loaned Rihanna her mitre.

I couldn’t help thinking the event was a little Fellini-esque. In fact, more than 40 years ago, Fellini filmed a Vatican fashion show in Roma that was every bit as weird as what was on display on the red carpet at the gala.

It brings up yet another pang of memory to think about what our teacher and mentor Father Michael Morris would have made of this. Likely he would have found the celebrity Catholicism salacious and mildly entertaining. But, as a collector of liturgical arts, including vestments, he would have been on the next plane to see the exhibition.

I sometimes play a game in my pop culture and religion course called “Camp or Catholic?” in which I show a close-up of some piece of fringe or velvet cape, and the class has to guess who wore it—a camp figure or a Catholic figure. I then pull back the photo to reveal whether the piece in question belonged to Liberace or Pope Benedict. (Admittedly, the previous pope often blurred these lines, with his love for Bavarian lace and red Prada shoes.)

Some students have unfortunately interpreted this game as being anti-Catholic. It’s hard to explain to them that even as I’m pointing out the camp value of religious fashion, I’m also admiring it.

I love the liturgical elements of the different flavors of Catholicism (Roman, Anglican, or Orthodox.) Coming from a Protestantism that seems to only engage language and the mind, I love the idea of a Christianity that engages the senses. Something that’s visceral—a church of stone and stained glass, water and incense, jewelry and fabric. Father Michael often noted that so many of his students were Protestants searching for religion in the visual media of film and Catholic iconography. “They just eat it up!” he’d exclaim.

But even as I admire the ancient tradition and the devotion of believers that goes with it, I also love to acknowledge the divine decadence of it all—the embroidered brocade, the smoky incense, the Barclay Street plaster saints that look like they stepped out of a Madonna video. Highly expressive forms of liturgical ritual beg to be enjoyed on the aesthetic level as well as the spiritual. Besides some of the more erotic displays, the only difference visually between the fashions of the red carpet of the Met Gala and the fashions of high church ritual seemed to be the people wearing them.

PopTheology voice Mike Campos and I were having coffee a few weeks ago when the conversation turned to Pope John XXIII. A particular favorite of liberal Catholics and Protestants, the reformist pope was the father of the Second Vatican Council, which was a revolutionary, but ultimately incomplete, attempt to bring the Roman Church into the modern age. Mike’s Filipino Catholic roots run deep and he teaches religion at a Catholic high school in San Francisco. I was sharing with him my horror that in 2001 the Vatican had exhumed “Good Pope John’s” embalmed body from its tomb and placed it in a glass coffin at an altar in Saint Peter’s. I understand that remains have to be moved around sometimes, but did they have to put this mummified pope on display? And as for placing it at an altar where people worship, didn’t it all seem a little…well…pagan?