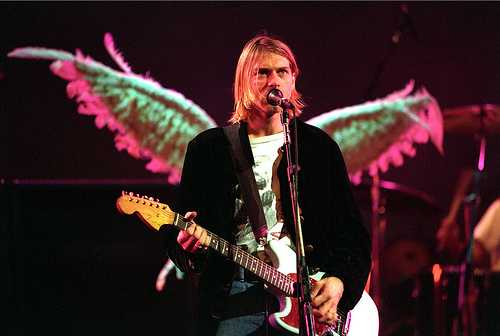 Last year I got a chance to see and review Seattle’s Experience Music Project’s exhibit on Kurt Cobain and the grunge era. The occasions for the exhibit were the 20th anniversary of Cobain’s death and Nirvana’s induction into the Rock-n-Roll Hall of Fame.

Now director Brett Morgen has added further to the Nirvaniana with a documentary on Cobain’s life, Montage of Heck. The film debuted at Sundance this year and had a limited theater release before being broadcast on HBO May 4th . It is now available on HBO GO.

The documentary, made with the help of Cobain’s family, deconstructs and analyzes Cobain’s life, but with a clear sense of reverence for its subject. It’s not so much The Gospel according to Kurt Cobain, but rather a gospel about Kurt Cobain.

If nothing else, Montage of Heck stands as an achievement of media art, weaving a narrative from TV, magazine, and newspaper clips, photographs, home movie and video footage, Cobain’s journals, interviews with family and friends, and audio recordings illustrated by animation. We see home movies of a young Kurt as an impossibly cute toddler, hear audio of Kurt confessing his teenage misdemeanors, and get a sense of his growth into a hyperactive, oversensitive, and deeply alienated young man.

The most common technique for advancing the narrative is the animation of Cobain’s journals. Words are scrawled across pages of notebooks as if Kurt is writing them out before our eyes, sometimes with narration, sometimes to be read by the viewer. Hundreds of drawings–he seemed to think in pictures as much as words and music—become animated on the page, often images of monsters or authority figures snarling and pulsing to the punk rock soundtrack.

The film could have used some more editing. Not every second from Kurt’s own videos of himself or every doodle of his notebook is worth the extended screen time. But the overall effect is a rock documentary of incredible intimacy.

Seeing Cobain’s creative process unfold is probably the most satisfying part of the film. Montage features extensive demo tapes and sound experiments that Cobain made on his own before he and the band were signed. Even here you can hear the beginning of the Nirvana sound: the spider-like guitar lines, fourths and fifths jumping through tri-tones; the twisted melodies that curl around minor chords without resorting to the rock security blanket of the blues; Cobain reaching down into his guts and exploding with his twangy yawp. Whatever else Cobain was—rock star, father, husband, addict—he was often a vibrating conduit of creativity.

The music tells an important story as well. The film’s composer Jeff Danna does fascinating things with some of Nirvana’s most familiar melodies, including a music box version of “All Apologies” during the home movies of Kurt as a toddler. It makes a surprisingly good lullaby, maybe because its one of their few songs in a major key.

At another point, just when Nirvana is on the precipice of worldwide acclaim, footage from the video for “Smells Like Teen Spirit” is accompanied not by the band, but by a slow, vocal rendition of the song performed by a middle school choir with excellent diction. It’s probably the only performance of “Teen Spirit” in which you can make out all the words.

The interviews add some insight into Cobain’s life. His mother, sister, father,

stepfather, and first girlfriend appear and explain his troubled upbringing. Mostly, you get the sense of people who genuinely loved Kurt, but didn’t know how to love Kurt. His broken home life undoubtedly contributed to his adult demons of depression and addiction. Several interviewees make clear that Kurt’s fractured attempt to create a home life with a wife and child at the height of the craziness surrounding Nirvana came from a desperate desire for family and stability.

I must admit I felt a drop in my stomach when Courtney Love first appeared on screen. In popular legend, Love takes much of the blame for Kurt’s death. Like John and Yoko or Sid and Nancy, blaming the woman for the rock hero’s fall is part of the misogyny of rock-n-roll—the adolescent boy fantasy of being on the road with your buddies, doing drugs and drilling groupies with no governing mommy-figure to spoil the fun.

Watching the extended scenes shot on home video with Kurt and Courtney together, however, is torturous. It’s no fun seeing two strung out people exposing their bodies and clowning before a camera, laughing at jokes that are only funny to them.

Love admits she did heroin when she was pregnant with their daughter, Frances. At one point she says, “I had already done heroin, beat the thing, had a rule…” and then she skitters off into senselessness. If she had “beat” heroin, why did she take up with an addict boyfriend, and/or make no attempt to stop him from using? It’s hard not to see Love as a classic enabler.

The saddest scene in the film is when Love tries to give Frances her first haircut, and Kurt is clearly high, unable to focus, and nodding off even as he holds her.

In my classes on popular culture and religion, I have used Kurt Cobain as an example of a rock-n-roll messiah. Departed pop culture figures are often cast as martyrs by their fans, killed by the oppressive systems of authority that they stood so strongly against.

It’s hard not to see the process of messianization happening in the film and in the rituals of remembrance around the anniversary of his death. In Montage, word after word, image after image of Cobain’s journals scrawl across the screen as though every line is written from God. You can even buy a reproduction of one of his journals.

Kurt’s mother seems to take on a kind of Marian role in the film. As she says near the beginning, “I used to think, ‘Why did I marry Don Cobain?’ It was like, ‘No, everything happened for a reason. Kurt had to be born. It was a must.’”

Fans can buy copies of Kurt’s guitars, even copies of the shoes he was wearing when he committed suicide. This seems like crass consumerism, but no more than the medieval relic sellers who sold pieces of the “true cross” or cow bones that supposedly came from saints. The value to the buyer is not that the items are real, but that they can imagine themselves having an intimate, even tactile relationship with the divine body.

I sometimes get pushback when I say that figures like John Lennon, Kurt Cobain, or Tupac act as pop culture messiahs, and may indeed have had qualities that compare favorably to Jesus Christ. “Lennon abused his first wife and neglected his oldest son,” people tell me. “Cobain was a junky.” “Tupac was a gangster.”

I’m not sure how these arguments are relevant. Jesus may well have been a jerk for all we know. (In fact, it’s kind of in the record, see Matthew 15:21-28.) Jesus was an apocalyptic prophet who is said to have made pronouncements like the “little apocalypses” in Mark, Matthew, and Luke, that were as weird and destructive as anything Cobain wrote in his journals.

All of this gets to the point that messiahs are often anointed not by God but by popular acclaim, by their ability to embody some deep need or hope for a particular, and often marginalized, community. They often have little control over their legacies or how they will be remembered.

Cobain did not want to be the voice of a generation, and it may have been the very clamoring of his fans that led to his death. But he really didn’t have a choice in the matter. For a cohort of young people that grew up in the rubble of the 60’s—divorce, AIDS and addiction, instead of sex, drugs and rock-n-roll—Cobain was an avatar, a hero, a saint, and even a messiah.