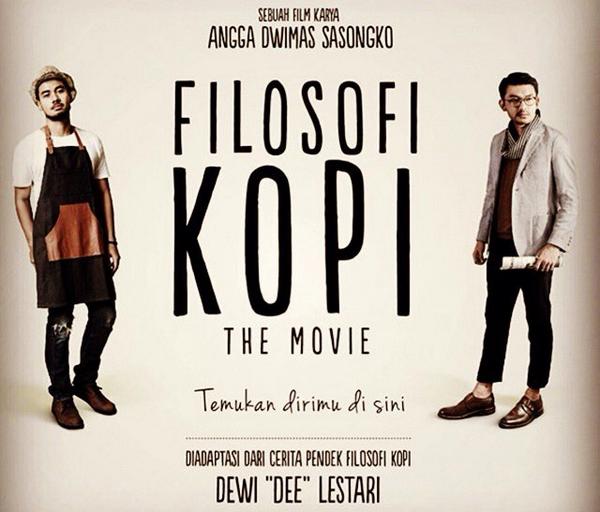 For some people, coffee is simply a carrier of caffeine that fuels a dulled mind and a tired body. To Coffee-philes, it’s much more than that: it is one of the great joys of life. Filosofi Kopi is a film brewed for the latter group, though in reality, the message can be generalized for the masses as we all have some interest, hobby, or passion that generates joy and meaning in our life. For some it’s coffee, for others wine, for others, still, it’s cinema. The fact that for one person coffee is a commodity and for another a spiritual experience simply indicates the diversity of interests and passions in the world. 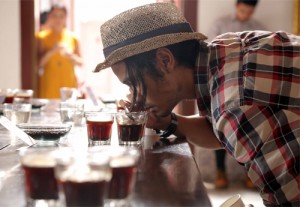 Set in Indonesia, one of the largest coffee producers in the world, Filosofi Kopi (directed by Angga Dwimas Sasongk) is the story of Jody (Rio Dewanto) and Ben (Chicco Jerikho), two good friends in their twenties whose lives have been complicated by past events and the actions of others. They seek to rise above their present circumstances by opening and running a coffee shop. While one wants to erase debt built up by his father, debt he soon learns was created to fund his education, the other wants to produce the finest coffee as a way to get past the traumatic disintegration of his coffee-growing family.

The film opens with the revelation that the shop, Filosofi Kopi, is failing and, unless something changes soon, will close. There is a hint that some of the debt is owed to people who would do more than take ownership of the building. It is also evident early that the two partners have different agendas, business student Jody seeks to make the Filosofi Kopi profitable by expanding services such as offering WiFi and opening during the lunch hour, as well as cutting expenses by purchasing  cheaper, lower grade coffee beans. Coffee master Ben believes that only good coffee will make the shop successful, and therefore the shop should buy only the best beans. Ben also considers ancillary things such as WiFi a distraction from the “superior coffee experience” that he believes Filosofi Kopi provides. 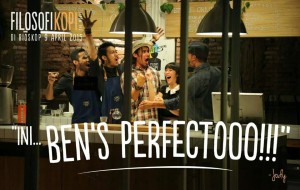 Into this stalemate walks a wealthy businessman, who offers them a challenge and a life-line. If they can brew the finest cup of coffee in Jakarta, he will reward them with enough money to decrease their debt and save the shop. After spending more money on very expensive coffee beans and two weeks finding the right blend, Ben and Jodi believe they have blended the perfect cup, and begin selling it under the name, “Ben’s Perfectooo!” All is well until an international coffee grader, El (Julie Estelle) comes into the shop and is less than impressed. She tells them that she has already tasted the best coffee at a some miles from Jakarta, and offers to take Jody and Ben to meet the grower and brewer. During Ben’s return to a coffee plantation and encounter with a grower much like his father, we learn his backstory. As often happened throughout Indonesia, Ben’s family was forced to abandon coffee beans for palm tree oil, a far more profitable crop. This changes Ben’s father into an angry volatile man, and it soon becomes apparent that Ben traveled to Jakarta to escape his father. 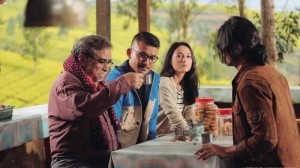 Throughout the film, the audience learns that brewing a cup of high quality coffee requires great care throughout the entire process. It’s an extensive checklist: proper and timely pruning of nonproductive branches so that the most nutrients can reach the bean; picking beans at just the right time; proper sun drying to prepare the beans for roasting; retaining and crafting the proper flavor during roasting; grinding the beans just enough to release that flavor but not losing it during brewing; and, finally, brewing the coffee at the correct temperature and for the right length of time. Shortcuts at any phase of production will ruin the experience.

Filosofi Kopi compares Ben’s life to this process. Childhood trauma wounded him, and even though his life was producing fruit, it wasn’t as flavorful as it could–or should–be. Rather than going back, facing his trauma, and repairing this brokenness by confronting his father and his fears, Ben compensates by doubling down in other areas of his life. The skill that Ben readily applied to growing coffee beans, but failed to realize in his own experience, was the necessity of pruning away that which chokes out life. Until Ben pruned the trauma from his life by addressing it, his life would never have the flavor the he–and his father–desired. 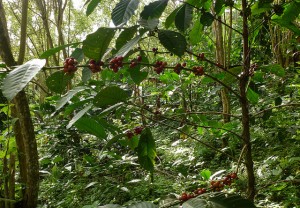 When we are injured–spiritually damaged by poor personal decisions or the actions of others–we cannot wait it out. If we do not address pain, loss, or fear, our lives will not be as full and productive as they can. Like coffee bean growers, caring for our own lives is tedious work that cannot be rushed or mechanized. It can be painful, and in the short term draining, but it’s the only way to ensure health and fruitfulness.

Like Jacob in the Old Testament, we all have baggage that we try to leave behind. But like Jacob, our disappointments, loss, behavior, and fears, follow us through life. No matter how successful, wealthy or powerful we may become, it’s not until we face our past, wresting and struggling with our losses and fears, that we can fully live the life that God desires for us. Like Jacob, we may come away from this encounter changed, or even wounded, but we will, even in this changed, wounded state, be truly whole and empowered to live a more fulfilled life.