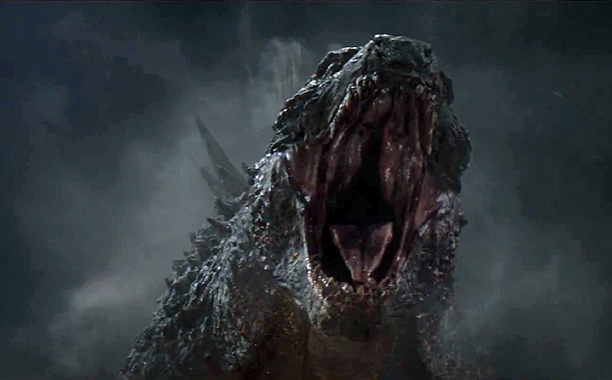 For a good full review of the film, see Andrew O’Heir on Salon.com

1.) Sometimes whether or not you like a movie may have to do with whether you were set up to like it, like if you’re part of the demographic the movie is pitched to. Sometimes, it just takes a good word from a critic. This is how I came to like Godzilla. Andrew O’Heir’s review set me up to be patient with the narrative the filmmakers wanted to unspool in this film. So I was prepared when three quarters of the film was about a nuclear accident in Japan, Bryan Cranston swinging for the fences with his obsessed scientist/widower character, and many pixels spent on the mantis-like MUTO’s (Massive Unidentified Terrestrial Organisms), which, although cool and monstrous, were not exactly Godzilla. Once Godzilla finally made his entrance, it felt like he wasn’t a moment too late or too soon.

2.) The film fits into our Pop-Theology-coined genre of the Hollywood Apocalypse. The main point being that in any given disaster film, it doesn’t matter how many people die as long as the white family at the center of the story survives and comes together at the end, their family ties strengthened. The assumptions of this genre are fundamentally immoral—the idea that the American family is so desperate for connection, and so distracted by modern life, that it is okay to destroy half the world so we can realize how valuable we are to each other.

3.) I’m willing to forgive the filmmakers of Godzilla. Mainly because the husband of the family at the center of the story is not Matthew Broderick or John Cusack or Bruce Willis or Ben Affleck. In choosing Aaron Taylor-Johnson and Elizabeth Olsen, director Gareth Edwards and his casting director went for less well-known stars, which made their survival seem a little less obvious. They can’t kill off Matthew Broderick, but they could potentially kill off Aaron Taylor-Johnson. (Spoiler: They don’t.)

4.) I am disappointed that the filmmakers fed Taylor-Johnson’s character into an automated action movie name generator and came up with “Ford Brody.” This sounds like the name of an SUV. “New for 2015, the Ford Brody!”

5.) Godzilla comes in fairly late in the film. But really, once the big guy is revealed and does his big trumpet-shriek at the audience, the film has sort of reached its apex. The chief complaint of fellow Pop Theology editor Ryan Parker was that they continued to cut away from the action as soon as the monsters started to fight. This is true, but if the monsters had stared their fight sequences sooner in the film, the narrative would have broken down into CGI-pornography.

6.) I love that the MUTO’s literally snack on nuclear warheads, throwing them up into their mouths and devouring them like jerky treats.

7.) Here’s to a sequel with as many good actors as this film (Ken Wantanbe and David Strathairn, in addition to Cranston, Taylor-Johnson, and Olsen) and as well-wrought a story. And a little more Godzilla.