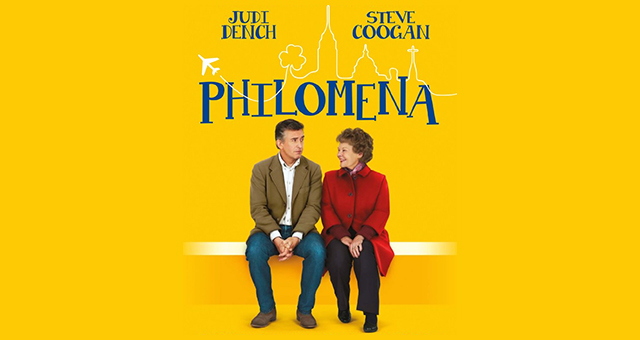 I love it when theological conversations seamlessly connect my real and “reel” lives. Such was the case when I went to see Philomena after church yesterday and watched as our discussions of power and control played out before me with extreme beauty, sadness, and grace.

Inspired by true events, Philomena tells the story of Philomena Lee (Judi Dench), a young Irish woman who attended school at a Catholic convent. When she has sex with a young man and becomes pregnant, the nuns “help” her deliver the baby. Actually, the refuse to give her medication to assist with the breached birth. The pain of childbirth will be her penance. In exchange for their assistance, Philomena is forced to work in the convent for a number of years. She also signs a contract putting her son, Anthony, up for adoption. Philomena signs the contract of her own free will, aware that she will never be able to provide him with a good life.

Recently ousted from political journalism, Martin Sixsmith (Steve Coogan) is looking for a new writing project when Philomena’s daughter, Jane (Anna Maxwell Martin), suggests he write about Philomena’s search for her son. Fifty years later, Philomena would like to know how her son is doing and whether or not he ever thinks about her. The nuns stonewall her efforts to gather information on his whereabouts. Sixsmith recognizes the “human interest” appeal of the story and, as a cynical agnostic/atheist, the opportunity to put the Catholic Church on trial and agrees to take on Philomena’s case. On a lead that many Americans adopted children from Philomena’s convent, she and Sixsmith embark for the United States to look for Anthony. While they “find” Anthony (I promise that’s not a spoiler), they learn several shocking things about his life and the convent’s role in it that shake Philomena’s faith. Her faithful response to these findings, in turn, shakes Sixsmith’s disbelief.

Philomena benefits from a strong script from Coogan and Jeff Pope, executed with inspired brilliance by director Stephen Frears. Dench gives another career-defining performance, and Coogan holds his own against this icon of cinema, turning in one of his best performances of his career. In the process, the two become something of a charming odd couple. Philomena is a terribly emotional film, but it never wallows in those emotions. Frears, Coogan, and Dench, through their direction, writing, and performance(s), shake up the emotional lows with moments of genuine humor or shocking revelations.

The film is bathed in religion, and while many viewers might argue that it is anti-religious, to do so is to miss the complexity underlying the narrative. The Catholic Church committed a grave injustice against Philomena and other women like her as they (to put it bluntly) forced them into indentured servitude and sold their children to the highest-bidding adoptive parents. Sixsmith wants to shed light on this injustice, providing, in his own way, a highly prophetic voice to the proceedings. Philomena is far less concerned with exposing institutional injustices than she is with simply learning the whereabouts of her son. She clings to her faith in God and the Catholic rituals that embody that faith and help her make meaning out of the suffering she has experienced…even if institutionalized religion is responsible for some of that suffering. Her unwavering faith puzzles and frustrates Sixsmith.

It would be easy to make the most of this dichotomy between Sixsmith and Philomena from a theological/religious perspective. Far more important, however, are the ways in which Sixsmith and Sister Hildegaard (the elderly nun who was responsible for Anthony’s adoption and who knows the most about Philomena’s “case”) are essentially opposite sides of the same coin. Hildegaard is a religious fundamentalist of the worst sort, lacking even a modicum of mercy. Sixsmith is the worst sort of agnostic/atheist, rude, insulting, and elitist. In response to these competing world views, Philomena acts and speaks in ways that silences and shames them both. She patiently endures Sixsmith’s elitist attitude and religious insults until she finally suggests that, at heart, he is simply an ignorant, angry, and rude man. For fifty years, she endured the mistreatment and silence of the convent that represented the faith she clung to, until she, with dignity and grace, forgives Sister Hildegaard. “Just like that,” Sixsmith asks in disgust. “No, not just like that,” Philomena replies. “This is a hard thing.” Her forgiveness of Sister Hildegaard astounds Sixsmith and puts her in a position of power to which the aging nun can not effectively respond.

Before I saw Philomena on Sunday afternoon, I attended The Loft, the community of faith Amy and I have been a part of since moving to Los Angeles in April. As it was the first Sunday of Advent, we began a series in which we will consider the implications of Jesus’ peculiar birth narrative on the way we live in and move through our world. We started by talking about notions of power and control and what it means for us to celebrate God’s incarnation as a baby born in a barn. I don’t want to go on at length here, but it should suffice to say that the birth narrative we celebrate should turn our notions of power and control upside down. In the film, Sixsmith and Philomena embody two different versions of power and control and how we might exercise them when faced with an unjust system. Sixsmith would, so to speak, burn it to the ground without considering what other system(s) would take its place. On the other hand, Philomena perseveres in her own individual and corporal expressions of faith until she can forgive the institution for the ways in which it wronged her. At the same time, after forgiving the community for its sins against her, she ultimately allows Sixsmith to expose those injustices in narrative fashion. Philomena’s is a strength-in-weakness…a sort of vulnerability.

At the screening that I attended, audiences clapped, laughed, or sent up muted cheers when Sixsmith accosted Sister Hildegaard, telling her that, were Jesus present, he would probably flip her out of her wheelchair and refuse to help her up. However, they fell silent at Philomena’s kind, loving act of forgiveness, which clearly shames Sixsmith and renders Hildegaard mute. Watching Philomena and taking in the audience reaction around me, I was reminded: “‘[…My] thoughts are not your thoughts, nor are your ways my ways,’ says the Lord.”

Philomena (98 mins) is rated PG-13 on appeal for some strong language, thematic elements, and sexual references and is currently in theaters. It’s a must-see.