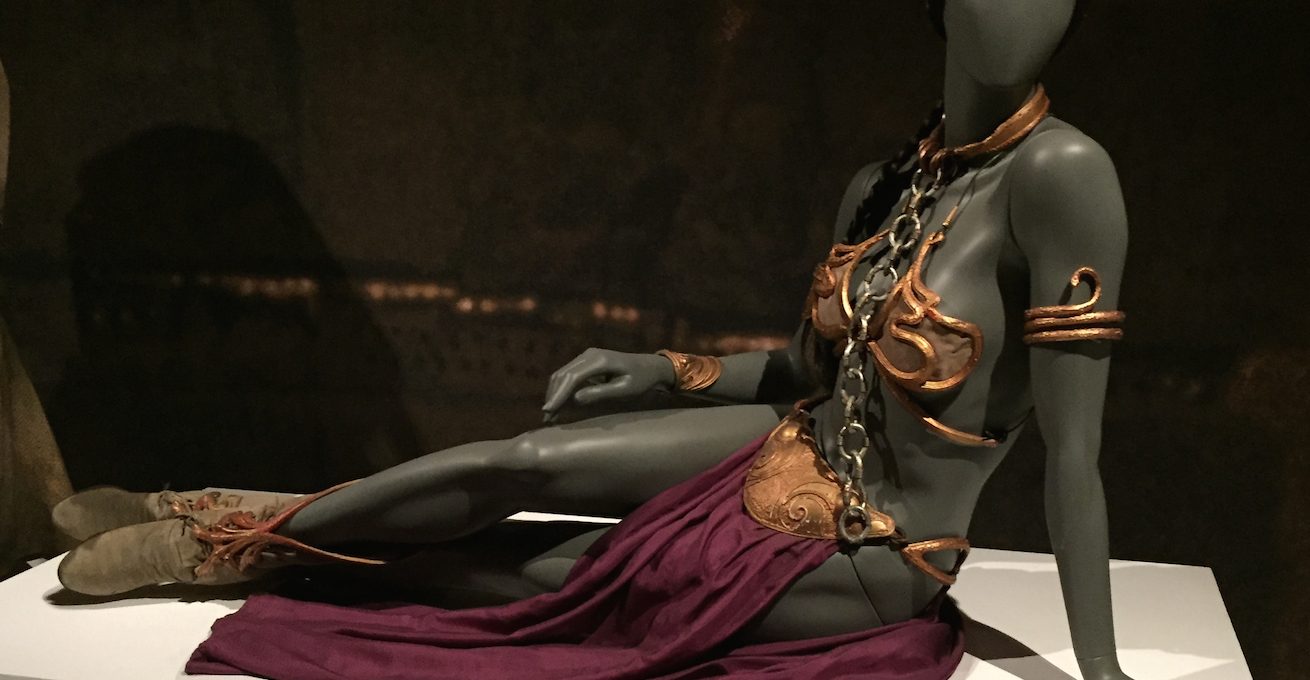 Back in Seattle for a friend’s wedding and, continuing to wonder if this might be a new home once my swamp exile is over, I found myself drawn again to the Experience Music Project. The EMP is becoming an all-purpose temple of pop culture, with big-time rock, sci-fi, film and video events constantly rotating through the museum. The Seahawks’ Super Bowl trophy and ring are even on display here. Makes sense, as Microsoft cofounder Paul Allen is the controlling interest in both ventures.

A little over a year ago, Fred and I were in the Emerald City for our own nuptuals, and we saw the exhibit on the 80’s and 90’s Pacific northwest music scene: Nirvana: Taking Punk to the Masses. That exhibit was still on display. This time, however, I was headed for the Star Wars costume exhibit (officially: Rebel, Jedi, Princess, Queen: Star Wars and the Power of Costume) and the exhibit on small-craft video games: Indie Game Revolution.

The Star Wars costumes, especially from the original trilogy, were like holy relics to me. Star Wars was the first film I saw in a theater, at the tender age of three. The family narrative is that when the lights went out, this wee toddler of a cultural critic started to whimper to the point that his mother began to wonder if she had made a mistake in bringing him along. But then those glowing blue words, “A long time ago in a galaxy far, far away…” appeared on the space-black screen, followed by the John Williams fanfare blasting from the speakers, and I was silently mesmerized for the next 121 minutes.

Seeing in person Han Solo’s gunslinger costume, Princess Leia’s diaphanous robe, original C3PO and R2D2 bots, and the fearsome storm trooper and Darth Vader costumes was like being introduced to the mythological figures of my youth—the subjects of childhood games, fantasies, dreams, and nightmares.

The exhibit explained some of the historical and cultural influences of the costumes. Han Solo’s outfit was compared to Gary Cooper’s in High Noon. The orange jumpsuits worn by the X-wing pilots were of the same shade of “international orange” worn by Navy pilots in the 1950’s and 60’s. Of course, the high boots and jodhpurs worn by the minions of the Empire were inspired by Nazi uniforms.

And then there was that metal bikini worn by Princess Leia in Return of the Jedi. How many lonely nights have pock-marked, odiferous teenage geeks spent slavering over the thought of Carrie Fisher’s tender flesh chained to that giant cosmic slug, Jabba the Hut?

Fisher, with typical caustic wit, described the outfit as “The bikini from hell. Like steel, but not steel but hard plastic, and if you stood behind me you could see straight to Florida. You’ll have to ask Boba Fett about that.”

Turns out the costume was inspired by such screen sirens as Myrna Loy in The Desert Song (1929), Yvonne De Carlo in Slave Girl (1947) and Salome, Where She Danced (1945, which isn’t about Salome at all but about the taming of the West), and almost every film starring Maria Montez.

In other words, like so much of the original Star Wars series, the Leia slave bikini was devised by ransacking the great, gaudy history of Hollywood films: Westerns, World War II movies, Buck Rogers, and Saturday afternoon movie serials. This sense of visual improvisation and homage to the essential cultural junk of the past was exactly what was missing in the prequels (Phantom Menace, Attack of the Clones, and Revenge of the Sith). Those of us who are of the true faith await the sequels, the first of which, The Force Awakens, is to be released this December, with ardent hope that talented storyteller J.J. Abrams can recapture what made the original films great.

But then, perhaps it’s too much to ask any director to recapture the wonder of a child, sitting in a darkened movie theater for the first time, transfixed by a story of good and evil being told through the interplay of light, color, and sound.