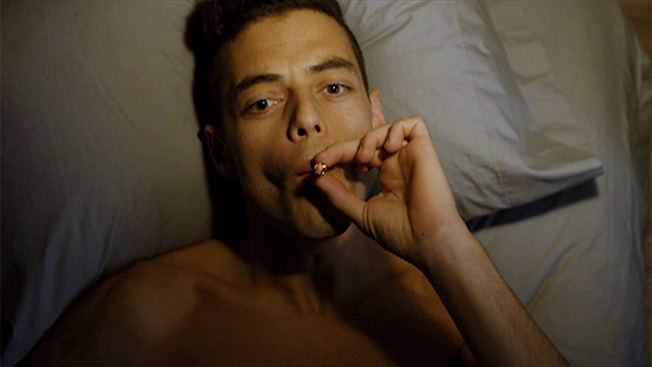 Tony Jones and I are back for another installment of Killer Serials where we discuss episodes 5-8 of Mr. Robot, our favorite show of the summer and one that seems to be hacking deeper spiritual and theological themes with each episode.

RP: So the good news is that the series’ technical brilliance is still front and center. It still looks and sounds great and is full of some of the best performances of the summer. Let’s go ahead and fill one 2016 Emmy slot for Rami Malek. Tony, you’ve been digging good scripted series for a while now. Is what we’re seeing in Mr. Robot and other series like it a side effect of shows that are gifted multiple seasons before the first episode even airs, allowing the creators to ramble a bit with, perhaps, less of a sense of urgency than if they were trying to “prove” themselves? The most recent episode, “br4ve-trave1er.asf,” largely deviates from the Evil Corp destruction plot line. I loved the suspense of the episode, which felt like a great short film, but it didn’t contribute to the overall story. There are two themes that stand out to me as the series continues. The first is Elliott’s social disabilities and awkwardness. He has trouble establishing and maintaining relationships, which makes his care for and [SPOILER] loss of Shayla all the more effective. His character makes me think of Serene Jones’ book, Trauma and Grace, in which she writes about the difficulty that trauma sufferers (Elliott is the epitome of this with an abusive mother and a deceased father) have in experiencing love and grace. How do we embrace those who don’t want to or physically can’t stand being embraced? Finally, Tyrell’s pursuit of the CTO position is the clearest example of the ways in which rapacious capitalism breeds cannibalism. I wouldn’t be surprised if he and his wife dine on the flesh of one of their enemies later in the season. These people eat each other alive, forget about the little people who aren’t even on their radar. Is there something about participating in that system that is self-induced trauma…that prevents its participants from being able to feel and give grace and love?

TJ: Tyrell does remind me of other characters on shows like The Sopranos and Breaking Bad, or especially like Frank and Claire Underwood — characters who seem to have no moral code whatsoever. And yet [SPOILER], after he kills, he weeps. His sexual violence has now crossed over into murder. I was not expecting to see that flash of emotion from him, and it complexifies him as a character. Juxtaposed with that, in the very same episode (“eps1.6_v1ew-s0urce.flv”), Elliot shows some vulnerability as well, confronting his therapist and admitting that he, like she, is lonely. Just when I start to think that Elliot’s character is too socially awkward to be believable, something like this happens and lures me back in. I think you’re right on to point out the trauma that contributed to his social disorder — all of us who have been in ministry or any helping profession knows people like this.

RP: I love the vulnerability that we finally see in Elliot (some of it staged, but most of it authentic) in Episode 7. The use of “Pictures of You” to convey his longing for Shayla is great, cause that’s one of the greatest songs ever. I still think this is all building on that theme of how “dysfunctional” individuals do/don’t or can/can’t feel loved, accepted, or understood. His mental exchange with Gideon is brilliant, as he exposes the bullshit notion of us being able to be our true selves around anyone. It’s impossible. And episode 8 includes a shocking scene that reveals just how deep that brokenness might run. They’re not driving this home as much as I’d like them to (and maybe this is my shallow approach to the content), but I appreciate the limited ways in which they’re setting up hackers as the transgressive underbelly of America. Can we please get an entire series devoted to Whiterose next summer?? In episode 7, Angela finally confronts Colby about the chemical leaks, which gets at the banality of evil of much of the capitalist system. In their conversation, she presses him about what the day was like when they decided to overlook the unlawful chemical disposal, and he tells her a disturbingly bland story. Angela responds, in tears, “So you were drunk and eating shrimp cocktail when you decided my mother would die?” But Angela’s vendetta might come at a cost, the downfall of Allsafe.

TJ: I’m finding not only a lot of the The Matrix in this show, with the confusion between reality and surreality, but also Fight Club, since we’re wondering if Mr. Robot is real, is the alter ego of Elliot or Tyrell, or is just an avatar in Elliot’s imagination. We, the audience, are Elliot’s “imaginary friend,” at least according to Elliot. Let’s talk about the spiritual/theological/religious themes in the show. There are not many that are overt, but the few we see are potent. After he escapes from jail, compliments of Elliot, Vera has his brother murdered, then says, My own brother. That’s what the universe has for me: to be my brother’s keeper. Like Cain after Abel, I’ll be a fugitive and wanderer on the earth. Brave fugitive. Brave wanderer.” Then, after making Elliot look at the dead Isaac, he says, “I’m gone, a spirit, one with all the heavens, all existence.” It’s a frightening scene, especially when it ends with Shayla, dead in the trunk. But it’s episode 8 that is absolutely amazing. I think it’s probably the episode that will vault this series into national prominence (that and Matthew Weiner saying it’s his new favorite). First, Whiterose gives us the existential proverb, “You hack people, I hack time.” Then, Tyrell tells his wife that they’ve been looking at what’s in front of them instead of what’s above them. What’s above, she asks. “God,” he replies. If this show somehow now tries to hack God, well, that would take it to a whole new level of brilliance.