Back in the summer of 2011, my friend Ernest Myers and I observed “June of Jest” by challenging each other to read Infinite Jest in one month. We were long out of college and not looking to impress anyone other than ourselves. It was a joy to read it alongside a friend and to have someone to share the burden with. As I watched The End of the Tour, based on Rolling Stone journalist David Lipsky’s five-day interview with David Foster Wallace in 1996 as the promotional tour for Infinite Jest came to an end, I recalled that month and how the joy of reading Wallace’s book with a friend contrasted sharply with his experiences of loneliness and depression in the midst of his brilliant creativity.

Lipsky (Jesse Eisenberg) and Wallace (Jason Segel), both writers, fall into deep conversation as soon as Lipsky arrives at Wallace’s snow-bound, rural Indiana home. It continues as they drive to the airport, fly to Minneapolis, spend a couple of nights there, and fly back. They talk about many things, the brilliance of the first Die Hard film, the unfortunate reality that we can’t constantly consume junk food, the nature of fame, reality, and creativity, Wallace’s addictive personality, the image-obsessed society we’re becoming, and the list goes on and on. The End of the Tour is grounded in a tight script by Donald Margulies, based on Lipsky’s book, Although of Course You End Up Becoming Yourself. James Ponsoldt directs with such skill that the single conversation at the heart of the film never feels boring or bogged down. Eisenberg is solid, but this is clearly Segel’s film as he gives a performance worthy of all the praise it’s receiving. The film revels in Wallace’s flaws, brilliance, and prophetic vision. I’m still processing it and will likely do so for days to come, starting all over once I see it again. For now, a few themes stand out, specifically the ways in which we all struggle with our “mirrored” selves, the necessity of empathy, the significance of place, and the surprising role that the Church can still play in all this. 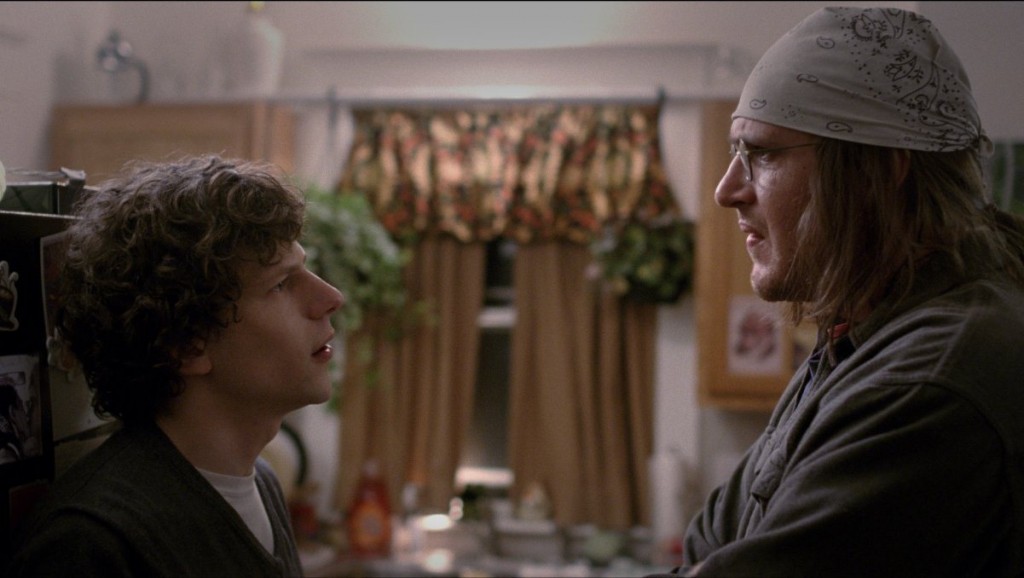 The Wallace given us in The End of the Tour is one that, to put it bluntly, struggles with the “mirrored self,” to paraphrase Foucault. Wallace is at war with his own identity and a host of idealized selves that he and others construct. Like we all do, he crafts an image of himself that he cannot fully live up to. At the same time, fans, critics, and writers like Lipsky project a version of Wallace, fueled by his very fame that they help create, against which he also struggles. This tension permeates every aspect of his life from work to relationships to friendships. He is constantly suspicious of people’s intentions: are they in love with him, do they want to be friends with him, or are they in love with what he represents or the image of him they have created? Wallace needs isolation to work, but he craves a long-lasting relationship, telling Lipsky that it would be great to have a wife to share these experiences with.

We are also presented with a man of profound empathy. In one scene, Lipsky and Wallace are arguing, and Lipsky accuses Wallace of putting on a humble front. He’s patronizing everyone by making them think he’s less intelligent than they are, when, if Infinite Jest is any indication, he’s a certifiable genius. Wallace snaps back in defense and argues that regarding everyone with whom he comes in contact as possessors of fascinating stories is a hell of a lot better way to move through life than believing you’re better than everyone else, an outlook that instantly cuts off any potential conversations. Such a worldview recalls Paul’s admonition in Philippians to “regard others as better than [yourself].” Perhaps this is part of what made Wallace’s writing so great and authentic, even in its outsized narratives.

The notion of place (where we plant ourselves) seems to be closely related to this. Some of the more striking images of the film are of the two Davids driving along long stretches of suburban Indiana roads between rows of fast food joints and chain department stores. Lipsky asks Wallace why he isn’t in New York, and Wallace sharply responds by critiquing it as a place polluted by the constant hiss of inflating and deflating egos. But he’s also aware of his own addictive personality and ego and the likelihood that he would be sucked into that din as well. Perhaps his fast food surroundings are Wallace’s Walden Pond, a place that provides some distance from the barrage of constructed images, even as its “safety” and “reality” are constructs too.

Finally, even though the specter of Wallace’s death hangs over the entire film and contributes to its impact, his life, in a small way, is a testament to the Church’s ability to speak into these struggles. Wallace, like so many brilliant creatives, suffered from and was fueled by depression. But he found solace in, of all places, a Baptist church. The film concludes with Lipsky flying back to New York, and Wallace dancing his heart out with a friend at the local church. In a world of mirrored selves that lack empathy and a sense of belonging, perhaps the Church is a port in the storm, reminding us of our true identity, cultivating in us a deep sense of empathy, and providing a therapeutic place where we can dance in celebration of these realities.

We are inching closer to the world that Wallace feared, when we will be wholly consumed by the images around us, participating in virtual realities that separate us once and for all. We are being fed, Wallace says, a host of images and stories by people who do not love us. It’s a vision that echoes last night’s episode of True Detective, “Black Maps and Motel Rooms,” in which Vera tells Ani, “Everything is fucking.” Thankfully, in The End of the Tour, we have a filmmaker and film that not only loves its subject matter, but loves its audience enough to gift us a conversation worth having.

The End of the Tour (106 mins.) is in limited release and is rated R for language.