Lucy (Olivia Applegate) and her best friend Annie (Katie Folger) are set for the…best…night…ever. It’s prom night, they look great, and, Lucy at least, has a hot date. Prom quickly falls apart. Lucy’s date gets hammered and Annie’s keeps trying to hook her up with random guys. They leave prom alone and frustrated. This is where the familiarity of writer/director Karen Sloss’ thriller, The Honor Farm, wears off and the craziness begins.

Lucy and Annie meet up with a random group of friends, who are headed to spend the night drinking and taking mushrooms at the Honor Farm, the creepy ruins of an old prison work farm. Rumors of  Satanic rituals, mad wardens, and, of course, grisly murders surround the farm and they fuel much of Lucy’s subsequent nightmarish trip. 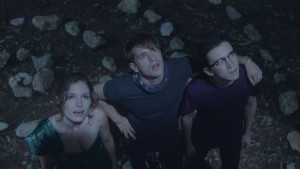 The strength of Sloss’ work is the numerous ways it frustrates accepted horror/thriller tropes. Just when we think we know what’s going to happen, Sloss takes us in a different direction. As frustrating as her narrative can be at times, Sloss ultimately uses it to serve her lead character, not the other way around, which is what usually happens in other thrillers.

Sloss referenced the teenage world in which the events unfold: “I haven’t forgotten the sheer pathos of being a teenager—stuck between the worlds of childhood and scary, looming freedom.” She continues, “Kids act impulsively and tend to think they’re invincible. In a way, that might be one of the best things about that age, the openness. But openness often makes for vulnerability.” Sloss captures those feelings and the possibilities inherent in each, but she doesn’t fatally punish her characters for their experimentation, like so many other films do.