Atomic Blonde has all the action and brilliant fight choreography of the John Wick series but with a stronger story and more compelling heroine. It’ll likely be one of the biggest hits of the summer. Not since Kill Bill has a female lead kicked so much ass, and Charlize Theron is completely believable in the lead role.

Taking place days before the fall of the Berlin Wall, Theron plays Lorraine Broughton, a spy sent into, as she calls it, a hornets’ nest to recover a recently leaked list of special agents. Her contact is Percival (James McAvoy), and he, as well as the Russians and the French are eager to get their hands on that list. A couple of things complicate Broughton’s mission. First, her superiors, Gray (Toby Jones) and a CIA agent (John Goodman), aren’t completely forthright with her. Second, MI6 and the CIA are plagued by Satchel, a double agent working for the Russians. Without giving more away, the film is full of twists, turns, and double crosses until the final credits roll. But whether you see them coming or not, the payoff is still amazing.

Atomic Blonde benefits first and foremost from fight sequences and accompanying cinematography that are full of lengthy single takes that keep the audience in the middle of the action. Fans of the fights in John Wick will be utterly thrilled with the performances here. There are two sequences, a hallway fight scene and a car chase/shootout, that are especially memorable.

Atomic Blonde also boasts an 80s soundtrack that covers all the hits and could inspire spontaneous singalongs. The visuals vacillate between cool greys and blues befitting a spy film and a pop, neon vibe of an ’80s dance club. The completely packed SXSW world premiere audience at the 1100 seat Paramount Theatre lost its collective mind throughout. More audiences will likely do the same when Atomic Blonde hits theaters July 28. 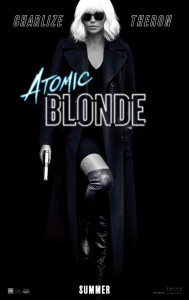