Docudrama in the most pure and challenging sense of the word, Mark Webber’s Flesh and Blood is one of the standout films at SXSW this year. Blending family members with actors and real experiences with scripted events, Webber turns his attention to broken families and communities, made especially more vulnerable with events of the last few months.

Flesh and Blood embodies Macky Alston’s idea that filmmaking can be a form of spiritual practice. As Webber and his team put faces and voices to the invisible and silenced, they humanize themes and issues that we frequently objectify and politicize: broken families, prison recidivism, absentee fathers, addiction, joblessness, and the list goes on and on. Because Mark and his family inject so much of themselves into the storytelling, the film boasts a vulnerability that is rare, even in other indie dramas. It’s this vulnerability that keeps Flesh and Blood from becoming a preachy documentary.

That being said, the challenging part is giving yourself over to the film and resisting the urge to separate what is real from what is scripted. Webber’s mother is Cheri Honkala, former VP candidate on Jill Stein’s Green Party ticket. Mark’s brother, Guillermo Santos, is diagnosed with Asperger’s Syndrome and is mercilessly bullied at school. He takes up filmmaking to cope with these experiences (more evidence of Alston’s notion of spiritual practice in film), and Webber mixes in this footage with his own to craft a film-within-a-film. Finally, both Mark and Guillermo’s father weren’t around for most of their lives. Mark’s reunion with his father towards the end of the film is one of the most profound sequences I’ve seen in film in some time. 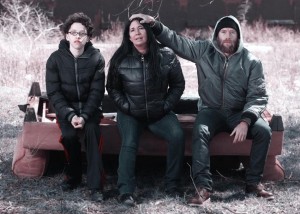 The “characters” in Flesh and Blood are broken—and perhaps irreparable—which is another way of saying that they are profoundly human. There is a straining for community here that is beautiful. It’s also an affirmation that when the government and everyone else abandons people in similarly vulnerable communities, they cling to and draw life from one another. As one character tells Mark, “Looking out for one another is what it’s all about.” This is embodied in Guillermo’s character, who takes great comfort in the knowledge that there are people in his life that love and care for him without condition.

Yesterday at SXSW, I had the opportunity to speak with Mark, Cheri, Guillermo, and actress Madeline Brewer about many of these themes.

Pop Theology (PT): Where did the idea come from?

Mark: Here’s the real honest-to-god truth. After I made my second film, which featured my two-year-old son, someone asked if my next movies was going to be about my mom. And It bought, that’s a really good idea. I found my voice with my second film. I’m obsessed with reality cinema and using real life relationships and dynamics to achieve a level of vulnerability that’s usually hard to get. I want to continue in that direction for a lot of the work I have planned. To work with my family on this one was the coolest thing.

PT: This feels like a risky question, but how or where did you draw the line between what’s real and not real? There must have been lengthy conversations about what to show and what to hold back.

Mark: The beautiful thing about Madeline being in this film is that it was a great restart for me because she’s an actor. Our relationship in the movie is an embodiment of other past relationships that friends and family members have experienced. But with my mom and my brother and our fathers, I look at it as such a beautiful gift, that everyone was so willing to go in and explore for the sake of art. I think the beautiful thing that was instilled in me, from my mom, was this sense of responsibility for others outside of just yourself. So that’s permeated the work I do as a filmmaker. There was a real sense of responsibility to get as vulnerable as possible, because that’s what resonates with people. Even in big superhero films, there’s a moment [of vulnerability in the character] that people latch on to, and its an exhilarating hit. I want to make movies that do that the whole time. That’s why I was so lucky to be able to work with my family.

Cheri: That wasn’t fun at all. It’s like all of a sudden at the end…that was the first time I had seen Mark’s dad since Mark was five. We were sitting in a room with all these people watching the film watching me. That was bizarre. But I think that Mark did a fantastic job of letting people have a window into real life in a very dignified way. I think that my experience as a single mom getting into relationships in an impoverished district with men that don’t have options resonates with people. I don’t get into the deadbeat dad thing. I don’t think men innately decide to be irresponsible fathers. I think there’s a backstory. They’re given really bad choices. It’s less deadbeat dads and more unemployed fathers, and some fathers decide to sedate and give up. Our story is actually the story of a lot of people that live in the 197th district [in Philadelphia] where I live. It gives a glimpse into the realities of over 35,000 people living in the neighborhood. I think they’re more relatable than the Kardashians.

Guillermo: It was annoying. There’s a lot of aspects of this film that are touched on in a very significant way. But there’s also the issue of being a first-time actor and having family yell at you, but having family yell at you because the world is going to see you in a certain way now. And then there’s also…as mom said…watching the movie for the first time with all these people watching you.

Madeline: I guess most of my character came from Mark telling me about himself and the story he’s telling and the situation we’re put in. There’s not a whole lot of scripted dialogue. I come from a theatre background, where we would spend weeks and weeks on the script…on words and the hidden meanings behind them. This was fun, but it was a little nerve-wracking, because I wanted to do justice to his life and his story. I just wanted to make it real…about real people. The movie overall is incredible, but that was my bit of it. I just wanted to color that relationship and those interactions as accurately as I could for myself and for him.

PT: It feels like the people that can relate to this story grows each week. It made me think about Moonlight, because both films are loaded with “issues,” but they’re not “issue films.” Can you talk about trying to capture themes without veering into that?

Mark: Thank you. That was the intention. It was an incredibly conscious decision on my part and with my editor. The making of this movie…in the forefront of my brain…was knowing that we have a tremendous amount of issues, and I have a personal responsibility to tell stories that can shed light on certain aspects of the world in a way that does not feel heavy-handed. That’s something I’ve learned throughout my trajectory as a filmmaker at how to get better at that.

Cheri: One of my favorite scenes…and I just wanted to put him in timeout…is when I go into the room and tell them to come out because we’re going to have family fun day, and I practice one of my speeches with them. And they look how they normally look…completely glassed over.

Mark: And that’s a great thing to bring up, because I feel like the wrong approach to that scene would be me and Guillermo sitting there smiling up at mom, like, “Go mom!” We don’t do that. You inherently know through the story and the soul of the film…you know that we love our mother, but you know it’s complex, because that’s what life is. We all love our mothers, but it’s challenging to love our parents sometimes, and vice versa, to love our kids. Life is, as mom says, hard. What I’m most proud of in this film is what you just said. We’re able to examine a shit ton of relatable things in a way that does not come across as preachy because we show the depth and complexity of things. We’re all loaded with hypocrisies. We never set out to make a movie with a specific agenda other than to make people feel.

PT: It feels like movies like this and this kind of storytelling is what we need going forward. We don’t need another documentary. We need more stories of people living into those issues.

Cheri: It’s easier to do horrible things to people if you don’t really see them as people. And just like in war…and we won’t talk about some politicians now…the more that you dehumanize somebody, the easier it is to kill them…deport them…do whatever you can.

PT: The documentary filmmaker Macky Alston uses the phrase “filmmaking as spiritual practice.” You talk about your film having a soul. Now that you’re done with the film, looking back, does that notion resonate with you.

Mark: You just said it. I’m going to steal that quote. This is my spiritual practice, because this is it.

Guillermo: It wasn’t ours!

PT: But when your character picks up the camera in the film, that’s a coping mechanism, right? Maybe a spiritual practice.

Guillermo: I’ve always used films as a crutch for my disability. That’s how I’ve learned to handle interactions. The social skills that I wasn’t gifted with from birth, I learned through movies. The first time I was cool was after I watched Mad Men, and that kind of thing. It’s a very prominent thing. I do want to make my own movies, and hopefully I’m not just another child actor after this, but I can come back, maybe, to SXSW 2020 with my own movie, and hopefully it will be a lot better than this avant guard mess [that I shoot in the movie].

PT: So what’s next for Flesh and Blood? Have there been any conversations around distribution?

Mark: Not yet. Hopefully.

Mark: I put my last movie out myself, because I’ve really struggled with…if you’re a real independent artist and you go in and do shit on your own…and then in the last hour, you’re like, “Oh someone please like me,” and you take this shitty deal. We’ve seen this in the music industry, right? Of course, you need a more robust infrastructure to get this [films] streaming on your phones. We did this fairly successfully with my last movie, so in my back pocket, we’ll just put it out ourselves. I’m not willing to sell out in the final hour and get some shitty deal. That being said, it’s great to get into SXSW and into a festival that has some hard branding behind it. That being said, it’s astonishing to me that people still come and line up for the studio films that already have distribution, but the little movies this is supposed to be for, you’ve got to fight to be seen. Real independent artists have to keep their heads up because it’s always a fight to be seen.