Premiering at SXSW, G-Funk is a documentary chronicling the creation of the West Coast hip-hop style known for its smooth melodies, heavy bass, and party vibes. Told from the perspective of the genre’s innovators, including film co-writer and rap legend Warren G, it is an intimate look into the creation of a style that captivated the whole country and defined a decade. I got the chance to meet with Warren G and director Karam Gill to talk about the film and the lasting legacy of G-Funk – here are my impressions. 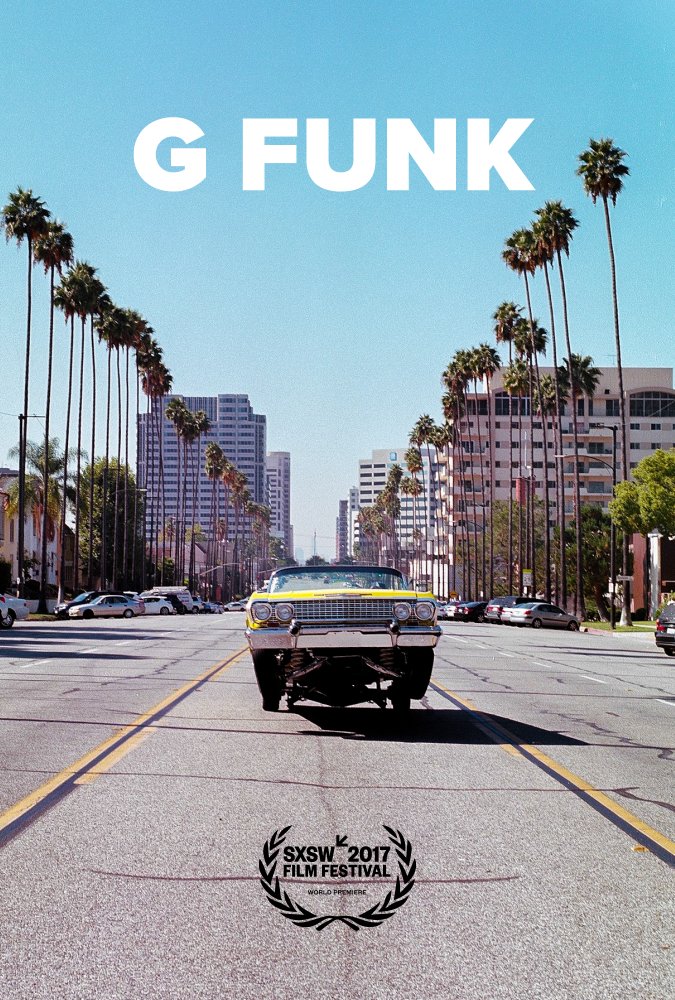 Some stories are woven so tightly into the thread of our culture at large that it’s easy to assume we know the whole picture. The story of 90’s hip-hop helped define an entire decade – it was the story of New York and L.A., the poets and the musicians who pioneered the reshaping of popular culture through an unfiltered celebration of their lifestyle and an unflinching look into their civil rights struggles. How many times have we heard the tales of East Coast vs. West Coast? The rise of Suge Knight and Puff Daddy – and the tragic end of Tupac and Biggie? If you lived during this era, you were inundated with its omnipresence and, if you were born after, you know that almost everything on the radio remained indebted to it. But, no matter what our collective memories hold or how many think pieces there have been, there is still much to uncover in the lives of those creators and innovators. Premiering at this year’s SXSW, documentary G-Funk looks to do just that by sharing firsthand accounts of Nate Dogg, Snoop Dogg, and Warren G – three of the greatest architects of the genre, the aesthetic, and the movement known as G-Funk.

Even if you’ve never heard the term before, you know what G-Funk is. Otherwise known as Gangsta Funk, it is the impossibly cool music of warm night California parties filled with indo and gin & juice – the laid back soundtrack that brought the West Coast lifestyle to the entire country. It is primarily defined by its heavy bass lines and chilled out melodies, borrowed from or directly influenced by funk pioneers like Parliament Funkadelic and The Isley Brothers, and a euphoric devil-may-care ethos that revealed the life of the street and what it meant to survive while still having a good time. When I asked Warren G to define G-Funk for me, he had his reply ready without a thought:

“Chords, strings, we brings melody – G-Funk, where rhythm is life and life is rhythm.”

With the smoothness of that reply, partly lifted from his 1994 smash hit “Regulate,” Warren taps into everything that made this genre so enticing as a lifestyle, as a philosophy. And, really, he should know as a giant of the genre right alongside the likes of Dr. Dre and Tupac. As a chief influence and contributor to Dr. Dre’s The Chronic, a genre staple and cultural landmark of an album, Warren G is not simply a name amongst many. He was an originator, an innovator, and a crucial element to the form and function of G-Funk and it was his desire to create this movie to let people know the truth behind this legendary genre.

As a film, G-Funk focuses first and foremost on the trajectory of lifelong friends Nate Dogg, Snoop Dogg, and Warren G. Forming the rap group 213 in 1990 as a sort of answer to Bay-Area rappers 415, they wanted to create music that showed everyone what Southern California was all about. Catching the ear of rap superstar Dr. Dre – Warren G’s step brother – the three became an essential part in creating The Chronic and Snoop Dogg’s massive debut Doggystyle. Although the film goes on to address the larger scale tales of East vs. West that captivated the nation, it remains throughout the retelling of close friends and collaborators, an on the ground look into their lives. Told through a series of intimate interviews, archival footage, and beautifully rendered dramatizations of California life, the film is loose and almost dreamlike in its narrative as old friends reminisce about their time creating art together. As director Karam Gill says, “we wanted to keep it organic, we didn’t want a narrator, and we wanted it to flow because G-Funk flows.”

And the film is just that – organic. Karam shared with me that “Warren didn’t show up to any of the interviews cause he didn’t want people’s opinions to be shaped by him being there.” From Snoop Dogg and Too Short, to Deion Sanders and Ice Cube, the interviews from major players and participators in the game are as relaxed and natural as shooting the breeze at a backyard barbeque. “Everything is 100% what people wanted to say” Karam told me – and it shows. Even when they’re covering heavy topics of interpersonal strife and run-ins with the law, there’s a lax honestly that conveys the sense of familial love and youthful mischief that propelled the genre.

Much will be made of the fact that this is director Karam Gill’s first feature length. All the more surprising, however, is the fact that at 22 years old, Karam was born well into the movement. But, as he relates, growing up in L.A. meant that he grew up as a fan of these artists. Having met Warren G as an employee working on his social media presence in 2014, Karam and Warren struck up a friendship that led to Warren trusting Karam enough to truly share his story. “I had the story locked inside for a long time,” Warren relates, “I just needed to find somebody to help me put it in movie form without people trying to change it.” Turns out, Karam was right for the job and, over the course of the next two years, he helped deliver a film that doesn’t have an agenda of making it all out to be more than it is. This is the story of how friends created music and now, through all the drama, can look back proud of what they accomplished together.

Although the film covers the genre as a whole, from its roots in funk to its influence on modern artists like Kendrick Lamar, a large portion of the story naturally focuses on Warren. He explained to me that he had noticed people were getting the story all mixed-up, confusing fiction with fact. When he heard rappers talk about the Dogg Pound but failed to mention his name, he couldn’t abide by it any longer and is not shy about claiming his role. “I want people to see that this is what I went through, this is the shit I did, in order for [them] to be able to survive music.” And really, he’s not wrong. He was there from the beginning and is responsible not only for the genre’s creation but for its perfection. It seems that because his story didn’t follow the same neat narrative as Snoop Dogg and his involvement with Death Row that Warren’s got a bit lost in the mix. This film helps correct that ridiculous oversight.

It was well documented at the time but, despite Warren’s initial involvement with Dr. Dre and Snoop Dogg, he was historically snubbed for a place on the infamous Death Row label, moving on to join the historic Def Jam instead. Even though the situation was quite dramatic, neither the film nor Warren want to exaggerate it for the sake of stirring controversy. “It just wasn’t working out and I decided I had to make myself into what I knew I was. Def Jam opened up that lane for me to be able to do that,” Warren fondly recalls. For both Warren and the film, it was an unfortunate happenstance of business and life – but it was not something that slowed him down one bit. And, really, it was a blessing in disguise. “It gave me the opportunity to learn who I am, get myself together, and grow into a full-fledged artist and a man at the same time,” Warren proclaims, “I drove all the negative energy and turned it into a positive by driving it all into music.”

Although many might remember The Chronic as the iconic record of the era, it is arguable that Warren G’s 1994 Regulate…G-Funk Era is the absolute pinnacle of the genre itself. Helping to revive a struggling Def Jam, Warren G defied the snub by Death Row by making one of the tightest and grooviest G-Funk records ever recorded. The film does not treat the album with bias for the sake of its creator but rather uses it as an example of what G-Funk meant to the whole crew as artists and as family. From the fond recollections of Nate Dogg discovering his iconic soulful croon to Warren and Snoop perfecting their flow as an echo of the Cali life vibe, Regulate is held as an example among many of how their hard work paid off and changed the culture through their honesty and integrity.

For Warren, this film ultimately is meant to be a celebration of the genre and what it means to be true to yourself as a creator. The message is simple – “No matter what you go through in life just keep working hard. It’s a lot of bumps and bruises in the road but you gotta learn how to turn around, dip behind them, and get past that shit.” This film shows that such perseverance pays off and, not matter how rough it might have seemed at the time, true family will be there in the end to celebrate what you went through.

Listening to all the interviews, you get a real sense of the bonds that 213 formed and maintained through their art. There’s a real celebration here of what they created and all that they helped influence. Warren sees G-Funk as a movement that “created a way for people to express themselves and be different and do the things you want to do” and to do so in a way where they’re “not controlled by a company.” Whether they were on different labels or even different coasts, G-Funk is the story about how a group of friends found an art to celebrate their lives the way they saw fit and it is Warren’s hope that this film will remind up and coming artists that they just need to “do your own style that’s dope and not let anybody change what you got.” G-Funk is a testament to this fact and, thanks to the hard work of Warren and his friends, we all have a soundtrack to celebrate once the long week of grinding is through.

Warren himself is still out there grinding. Currently working a soundtrack of brand new music for the documentary, Warren is ever the ceaseless creator. From his clothing line (Regulator Apparel) to his own wine (you guessed it – Regulator), Warren is still living by the philosophy he helped develop when he was just a kid trying to make it in Southern California: “Just always stay positive and keep going – don’t let nothing take you down.”