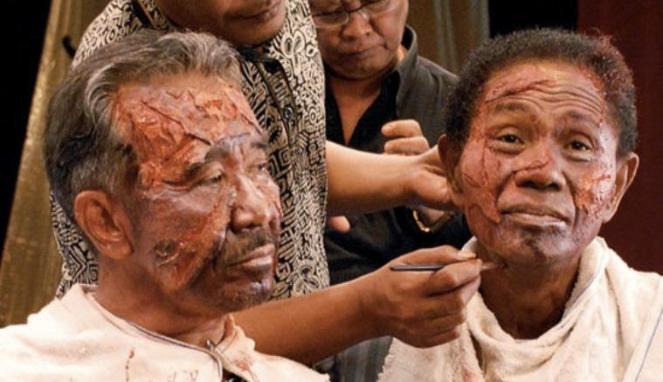 One of the best films (if not the best) at the Los Angeles Film Festival, The Act of Killing is a chilling documentary that takes an unprecedented look at genocide. Danish filmmaker Joshua Oppenheimer examines a brutal period in Indonesia’s history, focusing on the paramilitary group Pemuda Pancasila and its members’ role in the murders of more than 500,000 suspected Communists and ethnic Chinese in the late 1960s, a horrific event sponsored by several western democracies. Rather than simply presenting a straightforward documentary, Oppenheimer has the villains (Anwar Congo, Adi Zulkadry, and others) re-enact their barbarity as if staging a Hollywood film. This is all the more disturbing because Congo et al cite Hollywood gangster and actions films as inspiration for their brutal killings. Members of Pancasila and their supporters frequently cite the origin of the term gangster in the notion of “free men,” who operate outside the realm of governmental control.

Congo and his cohorts describe their past actions, for which none of them have faced trial or punishment, as if they were reading a to-do list that just happened to include beating, strangling, raping, and beheading their victims to death. They laid waste to entire villages and were frequently “forced” to practice more “humane” ways of killing to make clean up easier. The filmmakers even follow them as they continue to shake down small business owners for “protection” money. Most of these terrorists express no remorse, except for Congo, who confesses to sleepless nights and nightmares brought on by the ghosts of his victims. One wonders if this guilt is as staged as the recreation of his atrocious barbarism or if it is genuine.

The recreations of the killings and inquisitions are the most bizarre, kitschy scenes you’re likely to see on screen. They feature copious amounts of overacting, bad makeup effects, and not a little cross-dressing, all of which are equally terrifying. The film elicited quite a bit of laughter at the screening I attended. I’m hoping these audience members were laughing to keep from crying. Proponents of the notion that violent films have no real-world effects will find no quarter here. As such, The Act of Killing is an important contribution to the on-going conversation/debate about the effects of violent media.

Along with Hannah Arendt’s discussion of the banality of evil, this documentary reveals that it can also be equally absurd and ridiculous. Picked up by Drafthouse Films for domestic distribution, The Act of Killing will not get the wide theatrical release that it deserves, but its digital/home video life will still give it significant exposure. It should not be missed and is, in my mind, a frontrunner for the best documentary of the year.