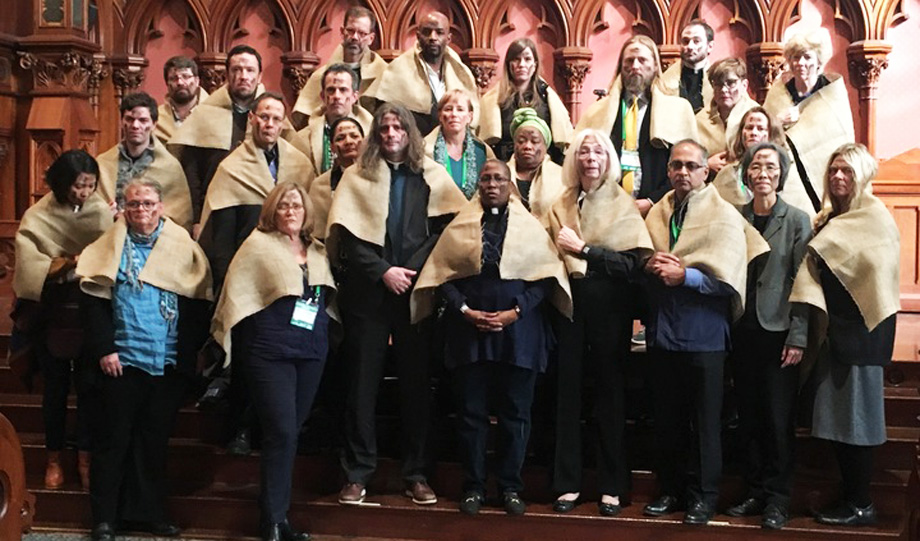 When the Nashville Statement came out, retrenching the religious right in its 1950’s-vintage morality of the family, I used a silly picture from the TV show Hee Haw to illustrate the article. The picture of a slack-jawed rural family whose collective I.Q. is lower than the average houseplant was meant both as an ironic shout-out to a show I loved growing up, and as a parody of the type of family the Nashville Statement is trying to preserve. (Nuclear and heterosexual, no matter how dysfunctional.)

When a group of liberal theologians got together during the American Academy of Religion/Society of Biblical Literature meeting in Boston in November, they issued their own statement: “The Boston Declaration,” condemning the current political climate in America. But in this case, they offered their own silly picture—a group of severe theologians literally wearing sackcloth and ashes. There are a lot of problems with this picture besides its aesthetics, and some problems with the Declaration. But put the two together and you have a theological and public relations disaster.

The list of signatories includes some of the most respected liberal Christians teaching, preaching, and leading today. There are many teachers and mentors on the list, so I offer criticism with some care. But the core of my academic work is that the problem with liberal Christianity is not that it doesn’t stand for the right things, but that it does so in a way that ignores or alienates the culture at large. The Boston Declaration and its accompanying publicity do nothing to fix this problem.

First, the picture: sackcloth and ashes are supposed to signify personal repentance and mourning for one’s own sinfulness. But the Boston Declaration is not repenting for the signatories’ sins; it is accusing other Christians of sin. The Declaration explicitly names “trends in Evangelicalism and other expressions of Christianity” as what they’re calling out. I am suspicious that “other Christians” may refer to Roman Catholics, whose church hierarchy has embraced the Republican social agenda with abandon, but which it is not considered good form for liberal Protestant scholars to call out at an ecumenical conference. The picture, along with the Declaration, seems to say, “You’re not going to repent for yourselves, so we’re going to repent for you.” This is what the Recovery movement calls, “Taking someone else’s inventory.”

The press release accompanying the Declaration includes a statement from Rev. Dr. Pamela R. Lightsey from Boston University School of Theology: “Today, too many Christians are placing party politics over the foundational teachings of Jesus. They make excuses for racial hatred and sexual abuse, and some have even said that it would be better to vote for a pedophile than a Democrat. This is the basest kind of tribalism that feeds hatred. It is the opposite of love, the opposite of Jesus’ teaching of love and mercy.”

This ignores the extent to which the Declaration itself is also a statement of tribalism:

1.) The Declaration’s represents a largely homogenous group of liberal religious scholars, with little input from other types of Christians—even ones who were at the conference where the Declaration was released.

Of the 200 original signatories, only twenty are from evangelical institutions. Only twelve are from Catholic institutions. So only about 15% are not liberal Protestants or Unitarians. Other than three token signatories from Fordham, Boston College, and Georgetown, there are no signatories from major Catholic institutions like Notre Dame, Catholic University of America, any of the four Loyola Universities, DePaul, Villanova, Holy Cross, or the rest of the Catholic academic world. There is some representation from evangelical institutions like Bethel University and Seattle Pacific University, but no signatories from other influential “liberal” evangelical schools like Eastern University, Calvin College, or Pepperdine. Significant schools that have Southern roots but strong liberal arts and divinity school traditions like Southern Methodist University and Wake Forest are not represented. No Southern Baptist schools are represented. I can assure you, having attended AAR/SBL, representatives of all these institutions were present. This begs the question: How much do the signatories represent a “diverse group of theologians,” and how much do they simply represent a Who’s-Who of Liberal Protestantism?

Furthermore, the statement misses in being an actual religious statement. Despite continually mentioning something called “The Jesus Way,” I counted five scriptural references. There is no bringing to bear the vast biblical and historical tradition (12,000 verses in the Bible on poverty alone) on the issues it raises. This statement could have been issued by any group of secular political liberals. I doubt many of the signatories would allow such a lightly-sourced paper to pass any of their classes.

2.) The Declaration makes no mention of the problems of Red State America that have, in part, caused the current political situation.

There is no mention of the gutting of the working class—and I mean the working class, not just the white working class—in Red States, There is no mention of the opioid crisis that is a major factor in more than 50,000 overdose deaths per year. There is no analysis of the kind of political despair that would cause voters to believe the lies of con man like Trump. Even white voters’ racism (which was a real factor in Trump’s election) or their tolerance of racism is exacerbated by the economic and social conditions they find themselves in.

I understand that secular political activists have little sympathy for white voters who elevated such a blatant racist and misogynist to the Oval Office. I expect more from my fellow liberal Christians. More grace. More sympathy. More ability to look at root causes rather than simply assigning blame.

3.) The Declaration calls out “tribalism” but makes no effort to reach beyond its own “tribe.”

Since the Declaration writers were so eager to place themselves alongside the history of the Barmen Declaration, let’s use some language from Dietrich Bonhoeffer. Bonhoeffer talked about “cheap grace” and “costly grace.” In the current political world, riven and fractured by tribal politics, those who simply parrot their own side’s beliefs are practicing “cheap grace.”

It took no risk, or in my liberal tribe’s locution, no “placing privilege on the line,” for the vast majority of signers to affix their names to the Boston Declaration. They will not be fired from their institutions. They will be lauded by their Facebook friends for “taking a stand.”

“Costly grace” would involve reaching out to those “evangelical and other Christians” they name in the Declaration. It might involve working with Russell Moore, president of the Southern Baptist Convention Ethics and Liberty Commission, who, despite his unerring homophobia and transphobia, has denounced racism in the Southern Baptist Convention and strongly condemned Trump during the election. (It nearly cost him his job.) It might involve meeting with someone like Cardinal Daniel DiNardo of Houston, president of the U.S. Council of Catholic Bishops, who represents one of the most patriarchal institutions in the world, but whose Thanksgiving statement expressed gratitude for the “special gift of immigrants and refugees.”

Appearing with leaders like these in the service of a issuing a broad-based statement of Christian condemnation of the current administration would mean risking the easy approval of Facebook friends and academic colleagues. It would bring about the ire of a swarm of angry online activists who can broach no compromise with the “enemy.” In other words, it might involve some actual social sacrifice.

It might also get some real press and do some real good, convincing some Americans who are wavering to realize the current administration really is a special kind of dangerous and not just the victim of another partisan hatchet job.

In critiquing the Boston Declaration alongside the Nashville Statement, I am not making a “both sides do it” argument about “extreme” political positions. I agree with most of the actual issues the Declaration raises, but not its tone and its focus on the sins of “other” Christians.

American political conservatism is in a state of moral rot. The inevitability of its collapse is undeniable, the only question being if it will bring down our entire democratic structure with it.

Given this terrifying reality, a truly “prophetic” statement would be something truly ecumenical, rather than a litany of liberal positions dressed up in sackcloth-and-ashes drag.

This is not the time for more univocal statements of “conscience.” This is not a time for the self-gratification of calling out without the difficult challenge of reaching out.