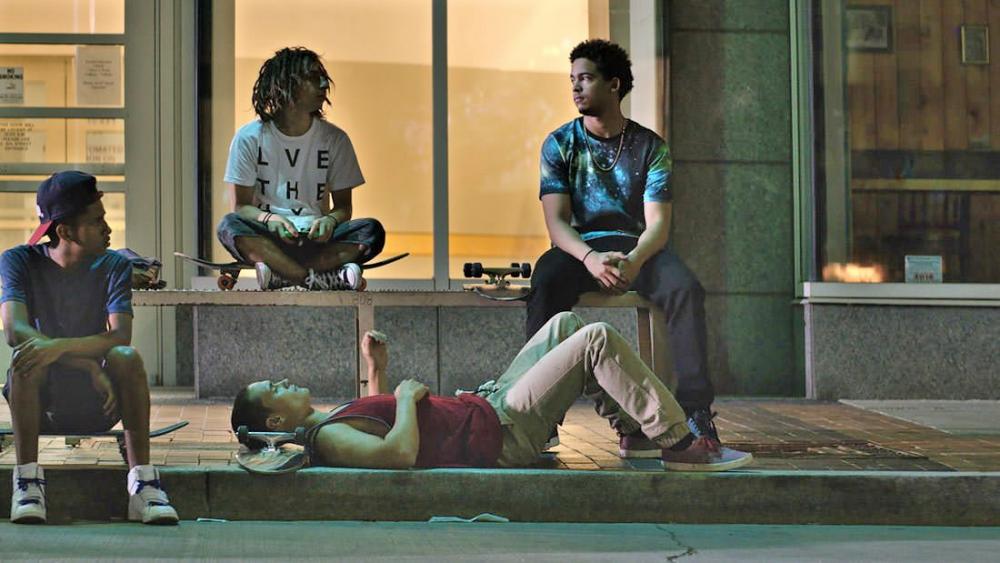 A couple of years ago at a friend’s film festival, I had the privilege of screening director Steven Caple Jr.’s short film, A Different Tree, which HBO ultimately purchased. Unfortunately, that great short is difficult to find, so when I saw that Caple’s first feature, The Land, was premiering at Sundance, I couldn’t miss it.

The Land focuses on four friends, Cisco (Jorge Lendeborg, Jr.), Junior (Moises Arias), Patty Cake (Rafi Gavron), and Boobie (Ezri Walker), who live and languish in Cleveland. They’re all archetypes of a sort, Junior is the child of a single parent, Boobie’s parents are still together and working hard to make ends meet, Patty Cake is a teenage father, and Cisco lives with his “uncle.” Disillusioned with school, they aspire to be professional skateboarders, but don’t have the money to enter the competitions that could land them sponsorship deals. They commit petty crimes to make ends meet, but when they jack a car, they stumble across a bag full of drugs. When they start selling these drugs, their lives turn, momentarily, for the better until things come crashing down around them.

The Land isn’t a splashy film. It’s a quiet, measured narrative that is supremely well-told. Caple is that rare talent, a writer and a director that excels at both. His closeness to the subject matter–his experiences in Cleveland–inform not only his writing, but his directing. Throughout the film, Caple conveys feelings of confinement and oppression by keeping the four friends in tight spaces, but when the young men hop on their skateboards, the film exhales–explodes–and the sense of release is palpable. Although his characters are archetypes, they aren’t stereotypes. They are fully realized, and only the most hard-hearted of viewers will withhold sympathy for them.

Caple’s film feels authentic in ways that films like it rarely do. There’s no happy ending here, even if the tragic moment in the film is ultimately laced with hope for some of the characters. With conversations around movements like Black Lives Matter, racial reconciliation, ending police brutality, and the like, The Land (just as much as The Birth of a Nation) feels like the most timely film to play at Sundance and, perhaps, the film to track as it looks to find distribution moving forward.