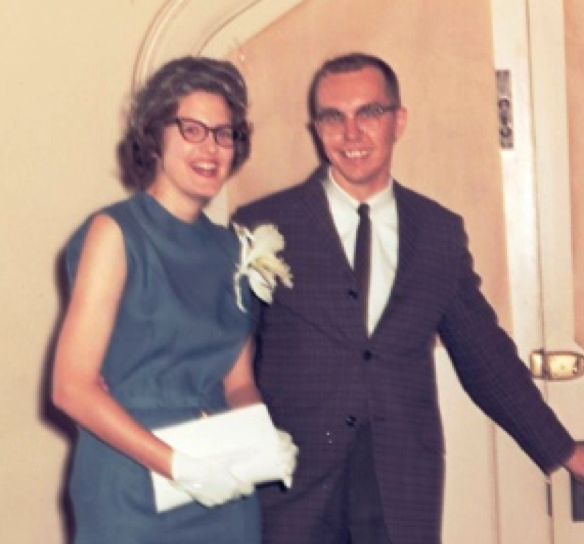 Last week, my parents celebrated their 50th wedding anniversary. This was a beautiful moment for my family as we gathered with friends in our adopted home in Northern Kentucky. By “adopted” I mean our extended family mostly lives in and around the Shenandoah Valley in Virginia, where my mom grew up and my parents met. I’m the only member of my immediate family that was born in the Bluegrass State. My parents are transplanted Southerners in a border state.

The fun part for me as a student of culture was putting together the nostalgia pieces for the celebration, including getting my parents’ old 8mm films converted to video. Ever wonder why all home movies of a certain vintage are out of focus, shaky, and are constantly cutting from scene to scene with no continuity? That’s because in the old days, your camera had a spring-loaded crank that you wound up like a music box. Then you pressed the button and the film spooled for at most a minute, often shorter, before you had to crank it again. Usually, your viewfinder didn’t actually pass through the lens, so you had no idea whether you had anything until you got the film back from the developer.

Despite this, there was some good footage of my parents in the mid-1960’s, laughing and playing and doing that weird walk-toward-the-camera thing that cuts off as soon as they pass by. There were scenes of my mom’s early teaching career, which she continues to this day; shots of a Ramblin’ Wreck Parade at my dad’s alma mater, Georgia Tech; and hilarious footage of my dad trying to start his rear-engine Renault. Seeing your parents as young, vivacious adults, funny and sensual and in love in their first years as a couple, having a life before you came along, is both a wondrous and weird experience.

The other nostalgia piece I got to do was putting together the music for the party. In the process, I discovered a terrible family secret. I had thought my parents were swinging modernist intellectuals who listened primarily to jazz and folk. Being pre-Baby Boomers, they weren’t exactly into the psychedelic scene. I found out in exploring their old record collection, however, that they were just as likely to listen to what we now call elevator music: Herb Alpert, Henry Mancini, and the Montovani Orchestra. As I was in charge of the playlist for the party, I kept the focus on early 60’s jazz/folk/Johnny Cash/Beatlemania tracks and saved the easy listening for another time.

If the early to mid-sixties were a great time for music, it was also the last time religion was really “big” in America. How exciting for students of religion at the time to find themselves being challenged by Harvey Cox’s The Secular City (1965) or Paul Tillich’s Theology of Culture (1964), or to see the radical changes coming out of the Second Vatican Council.

It’s fitting that my parents met at a young adult gathering at a Presbyterian church, because that was a time you could actually find young adults at a Presbyterian church. Nearly 50% of Americans self-reported weekly church attendance during the late 1950’s and early 1960’s, and church membership was at around 70%. Many historians cite 50’s “family values” and the churching of Baby Boom kids as the reason for this. An interesting counter-theory is that public religion was encouraged in every facet of society, from Presbyterian convert President Eisenhower, to media, educational institutions, and the military—as a cultural foil to Communism. You can read up more on this in Jonathan Herzog’s The Spiritual-Industrial Complex: America’s Religious Battle against Communism in the Early Cold War.

When I asked my parents about their memories from the time they were dating, engaged, and married, I started piecing together a timeline from the summer of 1962 to the summer of 1964. Looking at what was going on at that time, I realized that while my parents were trying to build a life together, the world around them was pretty much going to hell.

After my parents met in the summer of ’62, my dad began his active duty Army service, starting in October. Yes, that October, as in the Thirteen Days of the Cuban missile crisis (later starring Kevin Costner). The memory Dad has that he’s shared many times with my brother and me is from the night before he was to join the Army. He was sitting in his barracks at Fort McLellan in Alabama, watching the entire post mobilizing – trucks, jeeps, weapons, and thousands of personnel– all headed to Florida for an anticipated invasion of Cuba.

Besides the very real threat of nuclear annihilation, there were so many other exciting, frightening, world-expanding things going on at the time. John Glenn and the last four missions of the Mercury 7 happened between 1962-1964. Watson and Crick received the Nobel Prize in ‘62 for their work on the discovery of the structure of DNA. The first planar integrated circuit, aka the microchip, was introduced in the early 60’s. The birth control pill was first marketed in the early 60’s.

Some of the most triumphant moments of the Civil Rights struggle took place, like the 1963 March on Washington. And some of the most wrenching moments, like the Birmingham protests and the National Guard being ordered to integrate the University of Mississippi. Just 9 days after my parents were married, three civil rights workers were brutally murdered in Mississippi during the Freedom Summer of 1964. This had to have affected my parents deeply, as they watched the Southern society they had grown up in upended and transfigured.

And of course, there was the Kennedy assassination. Which also necessitated a Kevin Costner movie.

My parents are definitely children of the early sixties. By the time in the sixties when people were saying, “Never trust anyone over 30,” my dad was turning 30. My parents’ favorite song when they were dating was The Beatles’ “I Want to Hold Your Hand.” Later, the Beatles would record a song called, “Why Don’t We Do It In the Road.” So you get an idea of which end of the sexual revolution my parents were on.

But from the other end of the sexual revolution, the 1970’s, when my brother and I were born, to today, the turning seems to be complete. My parents’ anniversary, celebrated, fittingly, at the Presbyterian church where I grew up, was also the first opportunity to welcome a new son into the family. That is, a son-in-law, Fred, a citizen of Singapore, who married me, their younger son, in Seattle in April.

In the time my parents have been together, the gay community has gone from sick subculture, to sexual rebels, to plague-threatened pariahs, to liberal cause célèbre, to downright boring. Now we gays are back to “I Want to Hold Your Hand.” This isn’t something my parents could have even imagined for their children when they got married, but there they were at their 50th, beaming in all the pictures with their “three” sons. The sixties certainly were harrowing, moving, mind-altering, and revolutionary. But our time has had its revolutions as well.