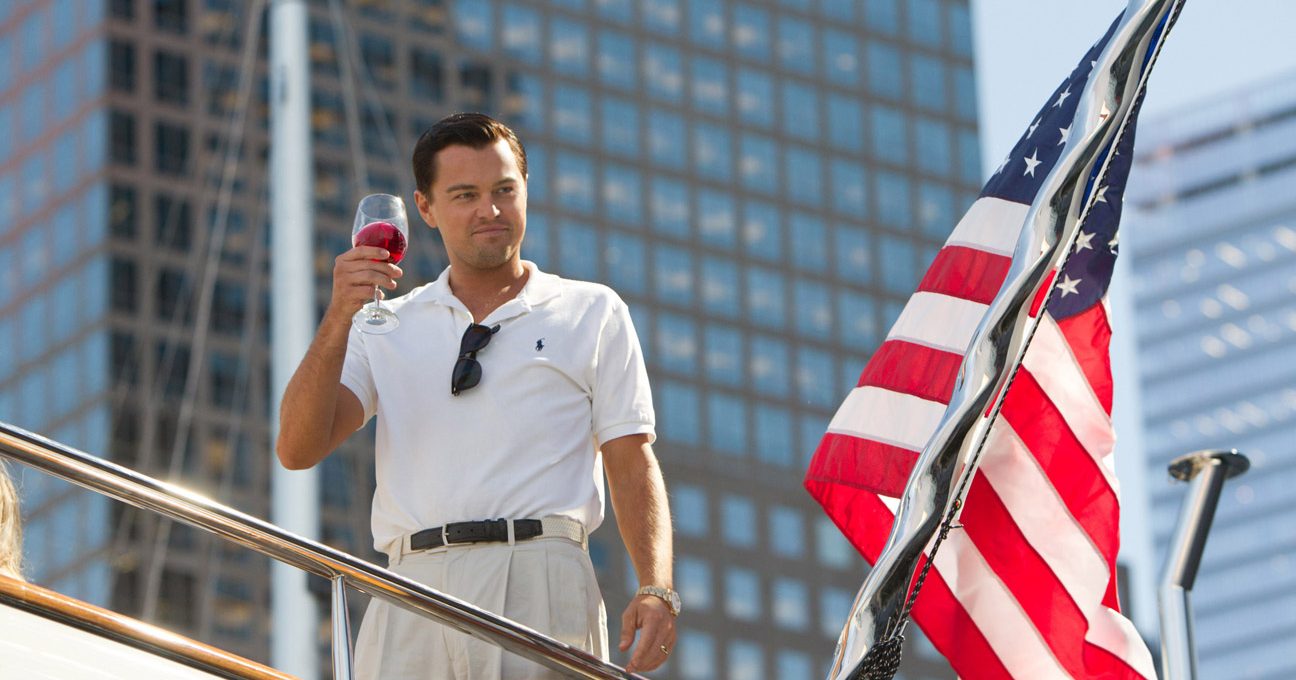 Few films among the contenders for Best Picture in the run up to awards season are as polarizing as The Wolf of Wall Street, if you pay attention to that sort of stuff. Whether celebration, condemnation, or parody of the luxurious lifestyles of its “protagonists” (or a mix of all three), Martin Scorsese has given us the most profound cinematic evocation of the Gospel of Mammon in recent memory. Unfortunately, it’s a Gospel that far too many Christians know all too well.

The Wolf of Wall Street tells a story of Jordan Belfort (Leonardo DiCaprio), a stockbroker who began his career selling penny stocks to unsuspecting investors, graduated to blue chip stocks, and eventually had his own IPO with Steve Madden shoes. Business was good for his firm, Stratton Oakmont, and Belfort became a millionaire many times over before his 30th birthday. Of course, greed finally got the best of him, as it always does with men of his ilk. Guilty of a litany of stock fraud crimes, Belfort refused to cop a deal with the SEC and was eventually arrested by the FBI. He named names and got off with only 36 months in federal prison. He’s out now, cashing in on the popularity of the film and imparting his “expertise” to countless suckers looking to get rich quick.

I say it’s A story because you can read countless others about his life, including Belfort’s autobiography of the same name and on which the film is based. Director Martin Scorsese chooses to focus on the excesses (sins, evils…whatever you want to call it) of the rich and famous, most notably Belfort and his cronies, chief among them Donnie Azoff (Jonah Hill), Nicky “Rugrat” Koskoff (P. J. Byrne), Chester Ming (Kenneth Choi), Robbie Feinberg (Brian Sacca), Alden Kupferberg (Henry Zebrowski), and Toby Welch (Ethan Suplee). To that end, some critics have accused Scorsese of celebrating that lifestyle or of glorifying such behavior, although I find it hard to believe that anyone over the age of 15 could take this view. Given Scorsese’s encyclopedic knowledge of film history and his appreciation for it, let’s quickly consider two of his predecessors.

In many of his films, legendary American director Sam Peckinpah employed a slow-mo technique to the violence in his westerns, most notably in The Wild Bunch. Arthur Penn did the same thing in Bonnie and Clyde when the authorities gunned down the titular criminals. Film critics at that time accused Peckinpah and Penn of celebrating and/or glorifying violence. The directors countered by arguing that they were essentially showing, in greater detail, its destructive nature. This is what Scorsese does with the sex, drugs, and booze that fill the hollow, yet destructive, life of luxury that Belfort leads. Had he wanted to celebrate it, he would have left out countless scenes including what actually happened on the flight to Switzerland, the ruined bachelor party hotel room, the driving while high episode, the moments of domestic violence, and the attempted abduction of his own daughter.

There are valid criticisms to be made of Scorsese’s film. Some people might lament the lack of a moral arc, or any sense of regret on the part of Belfort and his cronies. This, of course, would be dishonest, especially when lives lived in this way lack any semblance of a moral compass. When “Mad” Max (Rob Reiner), Belfort’s father, tells Jordan that his lifestyle is obscene, he could have also said amoral. Scorsese’s condemnation of this lifestyle would have been stronger had he given even brief attention to the lives that these men ruined. But, again, just because he doesn’t do that doesn’t mean that he’s celebrating the life these men lead. To lament the ways in which Scorsese portrays rampant drug use, sex, and the like continues to miss the point.

In The Wolf of Wall Street, Scorsese has laid bare the Gospel of Mammon, perhaps better than any other filmmaker in recent memory. With Matthew McConaughey‘s character, Mark Hannah, mentoring Belfort in the ways of Wall Street, he passes along this gospel. Belfort quickly and with great ease becomes its chief priest. Theirs is a gospel that values wealth above all else, judges on appearance, and celebrates the now. It’s also a gospel that has polluted much of the Christian church. Putting sex, drugs, and booze aside (and let’s face it, we don’t always have to do that), it’s hard to tell Belfort apart from most prosperity gospel ministers. When Belfort stands in front of his “followers” for their weekly sales meetings, he gets his employees whipped up into an emotional fury that only Pentecostal revivals would rival. He preaches a message of looking good and feeling good, and the only thing that separates this from a Sunday service is the assertion that God wants it for them too. Of course, with their ministers already preaching the complete package, many investors take Belfort’s cold calls as a sure sign from God.

As we see in The Wolf of Wall Street, this is no life-giving gospel, but one that only leads to death and destruction. Scorsese understands, better than many explicitly religious filmmakers to be sure, that punishment is inherent in sin. Who in their right mind would possibly sit through The Wolf of Wall Street, leave the theater, and want to follow in Belfort’s footsteps? Wait…can I retract that question? Scorsese also knows there are countless suckers waiting to be had, which is why he opts for the film’s concluding shot of Belfort’s audience hanging on to his every word at one of his sales seminars. Or as Belfort says to the audience when he’s trying to explain the illegality of their tactics: “You don’t actually give a shit about any of this.”

The Wolf of Wall Street is Scorsese’s best film since The Departed and one of the highlights of his career. DiCaprio and Hill deserve serious consideration for best lead and supporting actors (respectively). Kyle Chandler gives a subtly strong performance as FBI Agent Denham, and his “awwwww shucks” affectations on Belfort’s yacht is one of the brightest points in the film. Along with another Best Picture contender, 12 Years a Slave, it’s a searing indictment of the economic foundations on which this country is built.

The Wolf of Wall Street (180 mins) is rated R for sequences of strong sexual content, graphic nudity, drug use and language throughout, and for some violence and is in theaters everywhere.